United in grief and anger, families of the victims and several thousand Lebanese have marked one year since the horrific explosion at Beirut's port with a moment of silence and prayers at the foot of the silos that was shredded by the blast on that fateful day.

A few blocks away, groups of protesters hurled stones and Molotov cocktails and clashed with security forces near Parliament, which they accuse of blocking the investigation into the port blast by refusing to lift immunity of senior politicians implicated in negligence that led to the explosion.

Police responded with water cannons and volleys of tear gas.

READ MORE: One year after deadly Beirut blast, fight for justice goes on 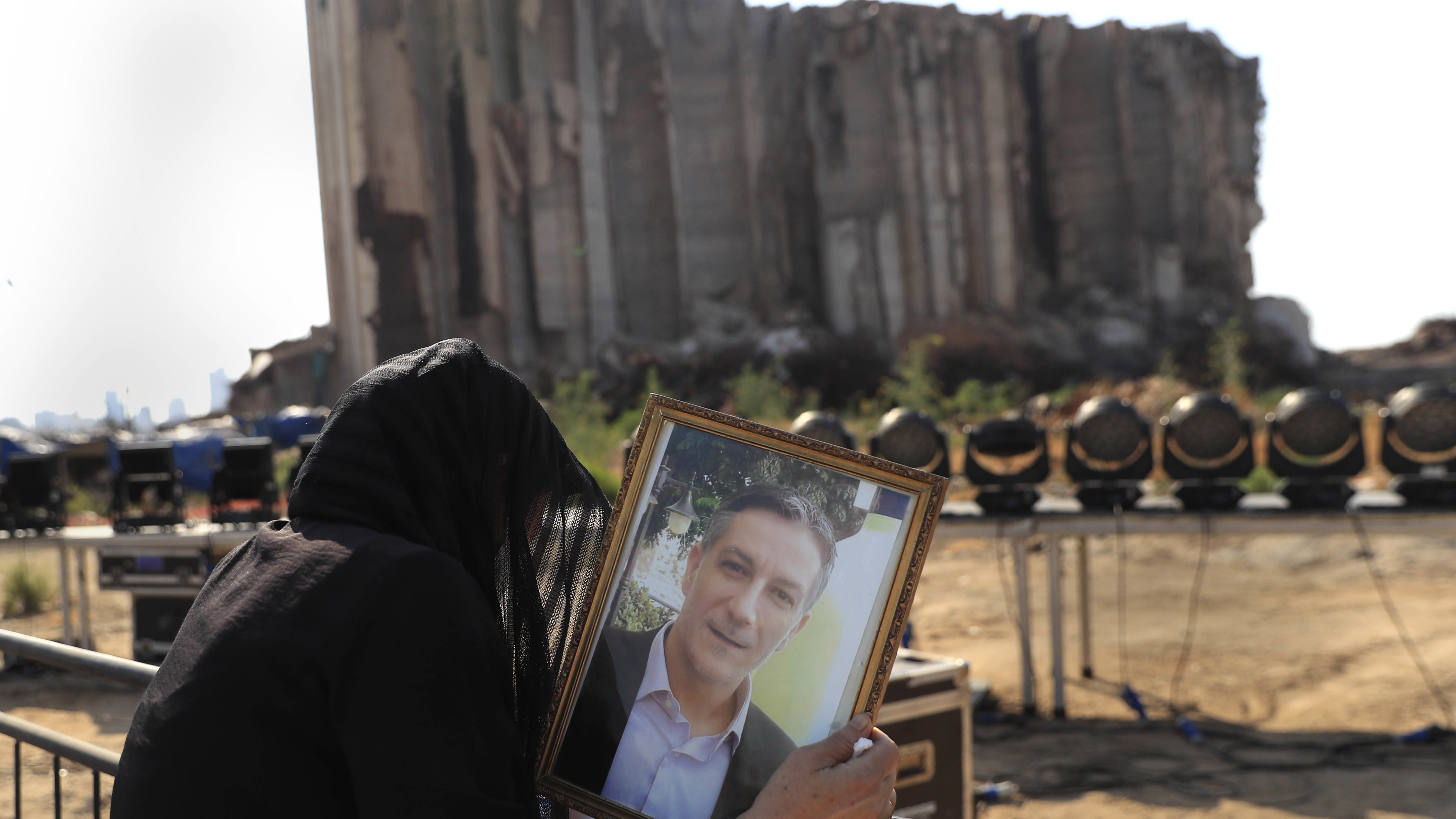 The grim anniversary came amid an unprecedented economic and financial meltdown, and a political stalemate that has kept the country without a functioning government for a full year.

“We have to call for justice and we have to stand together, all of us together as one people, next to the families, to really ask for truth and justice," said Nada Hjeily whose close friend died in the blast.

The explosion killed at least 214 people, according to official records, injured and maimed thousands and devastated entire neighbourhoods of the Lebanese capital.

It was one of the largest non-nuclear explosions in history — the result of hundreds of tons of ammonium nitrate igniting after a fire broke out.

The explosion tore through the city with such force, it caused a tremor across the entire country that was heard and felt as far away as the Mediterranean island of Cyprus, more than 200 kilometres away. 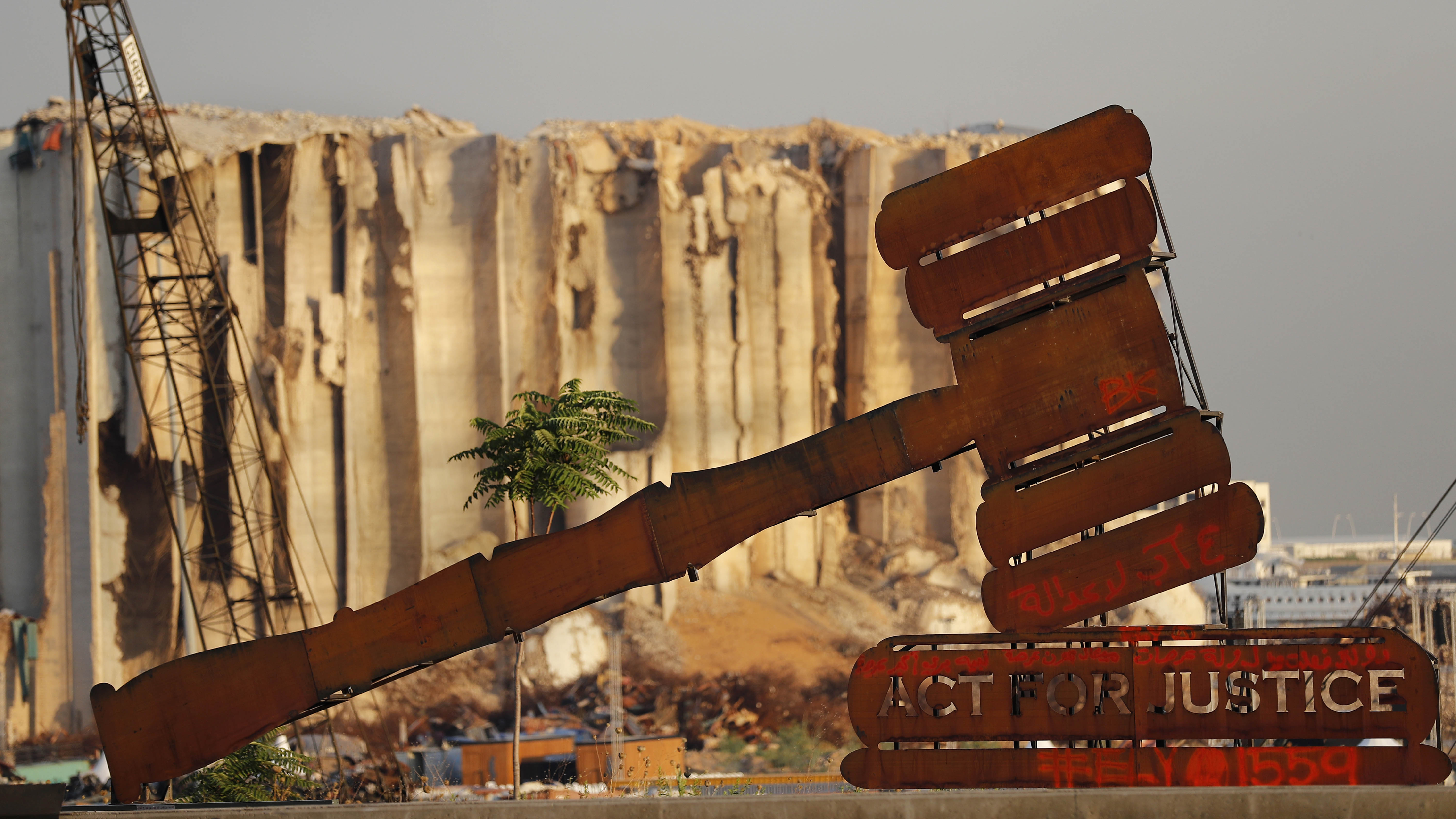 It soon emerged in documents that the highly combustible nitrates had been haphazardly stored at a port warehouse alongside other flammable material since 2014, and that multiple high-level officials over the years knew of its presence and did nothing.

A year later, there has been no accountability, and the investigation has yet to answer questions such as who ordered the shipment of the chemicals and why officials ignored repeated internal warnings of their danger.

Several thousand people gathered at various locations in Beirut on Wednesday, chanting slogans against the country's political class widely blamed for the port disaster and years of corruption and mismanagement that plunged Lebanon into bankruptcy.

They all marched toward the port.

“This is too big of a crime for it to be swept under the carpet,” said Sara Jaafar, an architect whose house opposite the port was totally destroyed, as she marched toward the rally there.

“It’s important for foreign countries to know we are against this murderous ruling class," Ms Jaafar added.

A year on, she has not been able to go back to her home, which like so many remains in ruins. 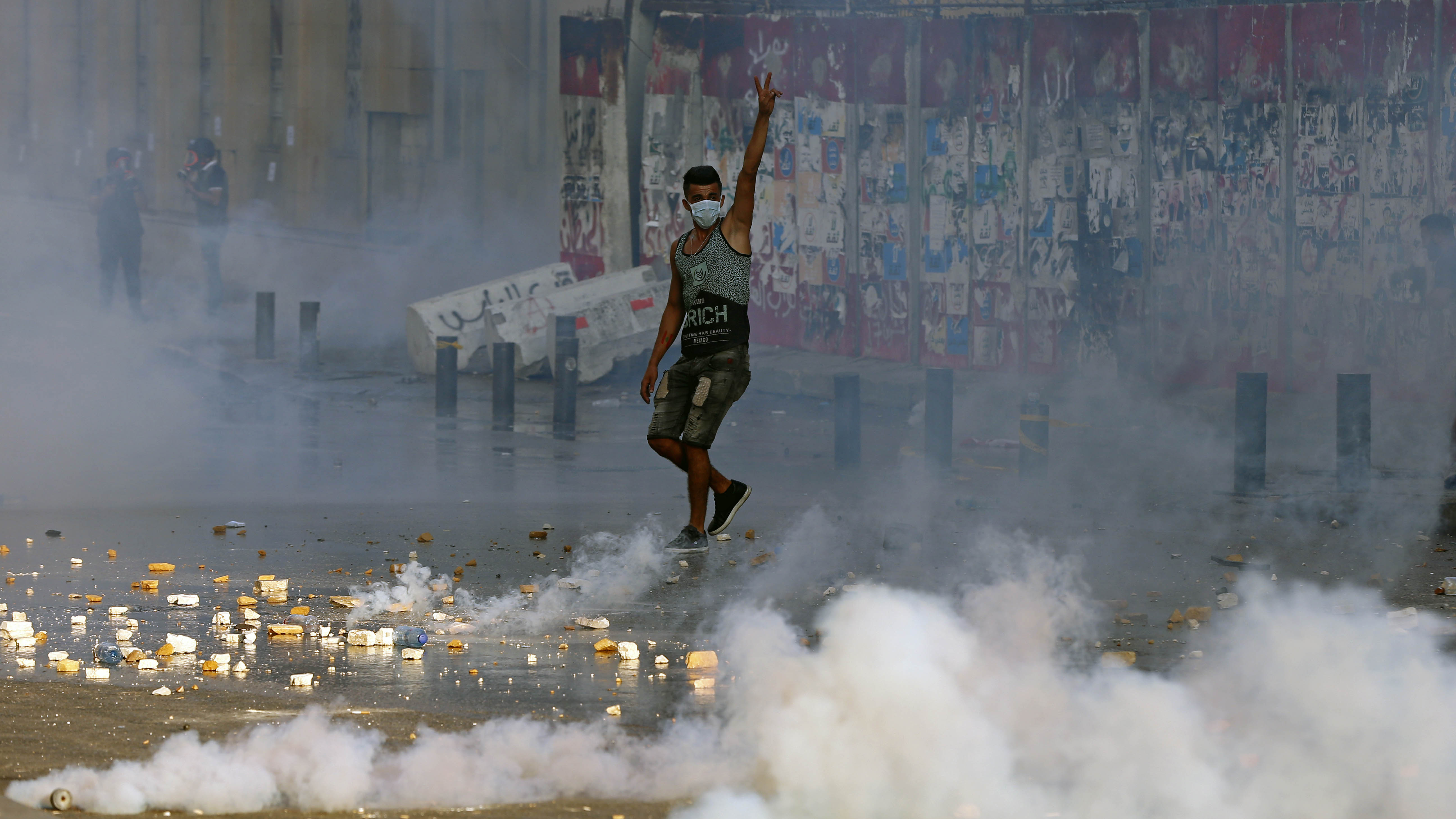 Protesters converged on the highway that snakes around the port, covering the streets with a sea of Lebanese flag and walking up and down the bridges over the motorway.

Families of the victims walked down the road parallel to the explosion site, carrying posters with photographs of their loved ones.

The crowds lined up on both sides broke out in applause, in a show of support and respect.

They then held a memorial and prayers inside the port, which still holds the ruins of the giant silos.

Names of each of the killed were read out.

A huge metal gavel with the words “Act for Justice” was placed on a wall opposite the port.

“We are all victims of this system,” Paul Naggear, father of three-year-old Alexandra, who perished in the blast, said. 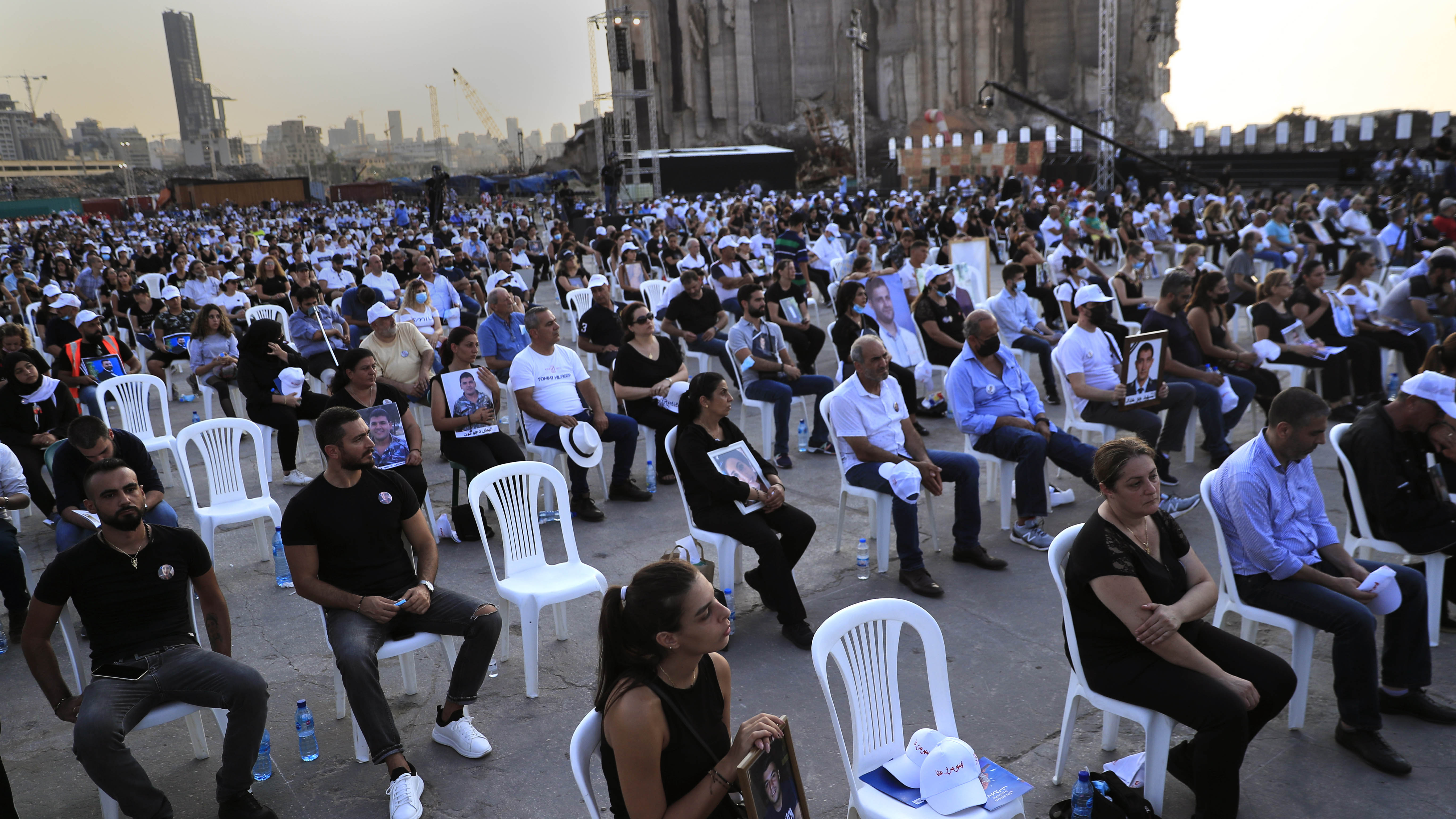 He spoke on a podium outside the port, his wife Tracy standing next to him.

Flags flew at half-staff over government institutions and embassies, and even medical labs and COVID-19 vaccination centres were closed to mark the day, which had been declared a national day of mourning.

Reflecting the raw anger at the country's ruling class, posters assailing authorities were hung on the facades of defaced buildings across from the port.

“Here starts your end and our beginning,” read one poster that took up the space of five floors of a high-rise.

“Hostages of a murderous state,” read another.

“This is a day of pain and grief. It is the day we lost our loved ones and relatives and children.

"We hope all those coming down (to the streets) in solidarity with us to respect our pain,” Ibrahim Hoteit, who lost his brother in the blast and is now a spokesman for the families fighting for accountability, said.

The blast, coupled with the devastating economic crisis, political stalemate and rising poverty, have posed the gravest threat to the small country's stability since its 1975-90 civil war.

In a statement today, the Lebanese army said it arrested a number of people who were on their way to take part in anniversary commemorations, saying they had a large number of weapons and ammunition in their possession.

In Beirut’s eastern neighbourhood of Gemayzeh, a fist fight broke out between supporters of the Lebanese Communist Party and others who support the right-wing Christian Lebanese Forces.

Several people were lightly injured in the stone-throwing, before security forces opened fire, shooting into the air and dispersed the two sides.

Later, protesters marched toward the parliament building and began throwing stones from behind a giant metal barrier, setting off clashes with security forces, which fired volleys of tear gas and water cannons to disperse the crowd.

In an extensive investigative report, Human Rights Watch on Tuesday called for an international probe into the port blast, accusing Lebanese authorities of trying to thwart the investigation.

HRW said a lack of judicial independence, constitution-imposed immunity for high-level officials and a range of procedural and systemic flaws in the domestic investigation rendered it “incapable of credibly delivering justice.”

The explosion — which destroyed and damaged thousands of homes and businesses — and the lack of accountability have added to the deep political and sectarian divisions, tensions and anguish in a country reeling from multiple crises, including an economic unravelling so severe it has been described by the World Bank as one of the worst in the last 150 years.

The crisis has led to a dramatic currency crash and hyperinflation, plunging more than half of the country’s population below the poverty line. 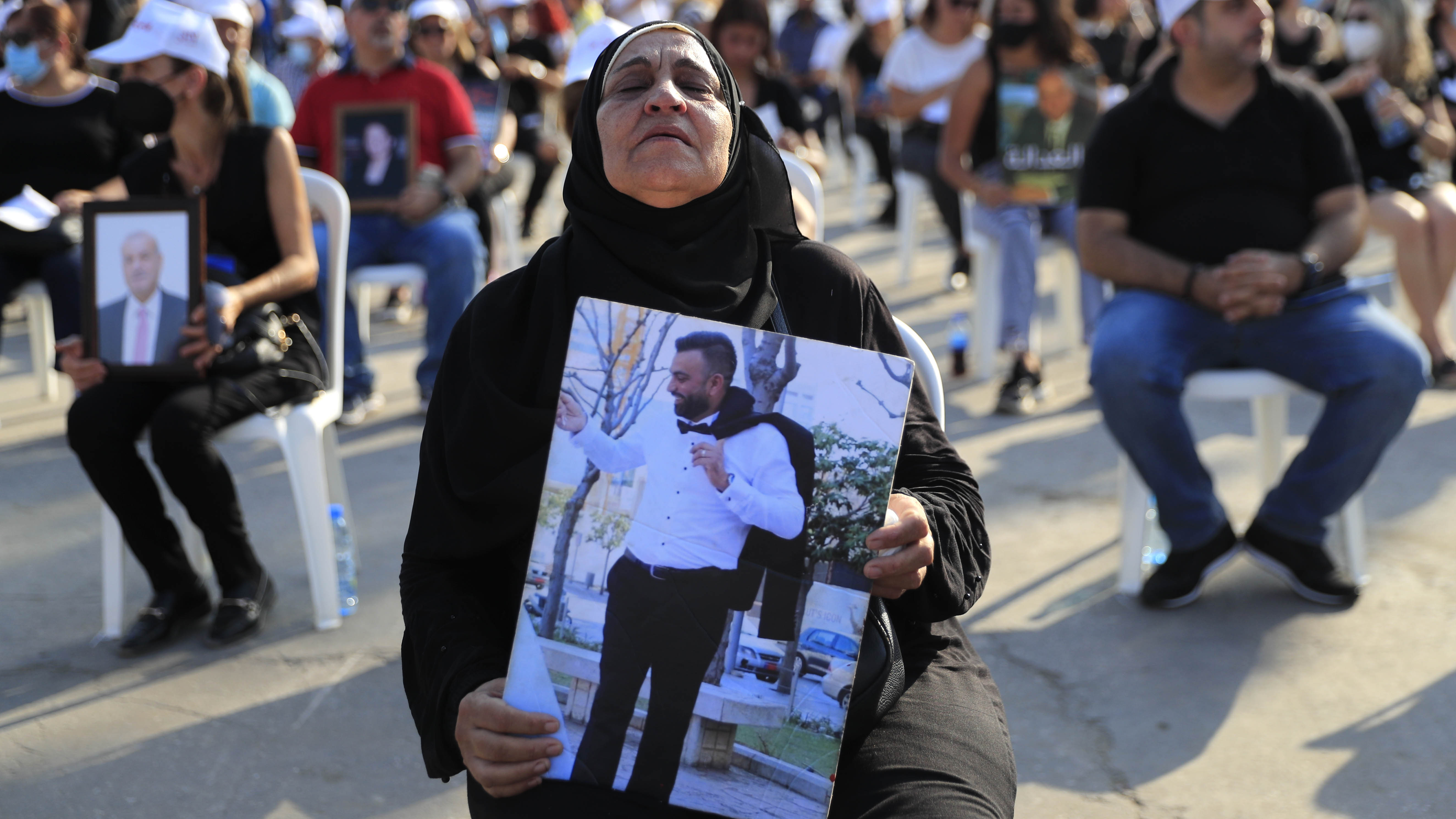 The international community has refused to help Lebanon financially before wide reforms are implemented to fight widespread corruption and mismanagement.

Meanwhile, an international conference co-hosted by France and the United Nations on Wednesday raised $370 million in aid for Lebanon's growing humanitarian needs, including $118.6 million pledged by France, the former colonial power in Lebanon.

The money is intended for the people of Lebanon, bypassing the government.

At the Vatican, Pope Francis recalled the suffering of the Lebanese people, as he held his first weekly audience with the public since surgery a month ago.

“A year after the terrible explosion in the port of Beirut, Lebanon’s capital, that caused death and destruction, my thoughts go to that dear country, above all to the victims, to their families,’’ the pontiff said.

“And so many lost the illusion of living,’’ he added.