Pillars of billowing smoke and ash turned the sky orange and blocked out the sun above Greece's second-largest island as a days-old wildfire devoured pristine forests and encroached on villages, triggering more evacuation alerts.

The fire on Evia, an island of forested mountains and canyons laced with small coves of crystalline water, began on August 3 and cut across the popular summer destination from coast to coast as it burned out of control.

Scores of homes and businesses have been destroyed and thousands of residents and tourists have fled, many escaping the flames via flotillas that even operated in the dark of night. The blaze is the most severe of dozens that broke out in the wake of Greece's most protracted heat wave in three decades, which sent temperatures soaring to 45 degrees Celsius for days, creating bone-dry conditions.

"It's already too late, the area has been destroyed," Giannis Kontzias, mayor of the northern Evia municipality of Istiaia, lamented on Greece's Open TV.

He was one of several local officials and residents who took to Greek TV networks to appeal for more firefighting help, particularly from water-dropping planes and helicopters. 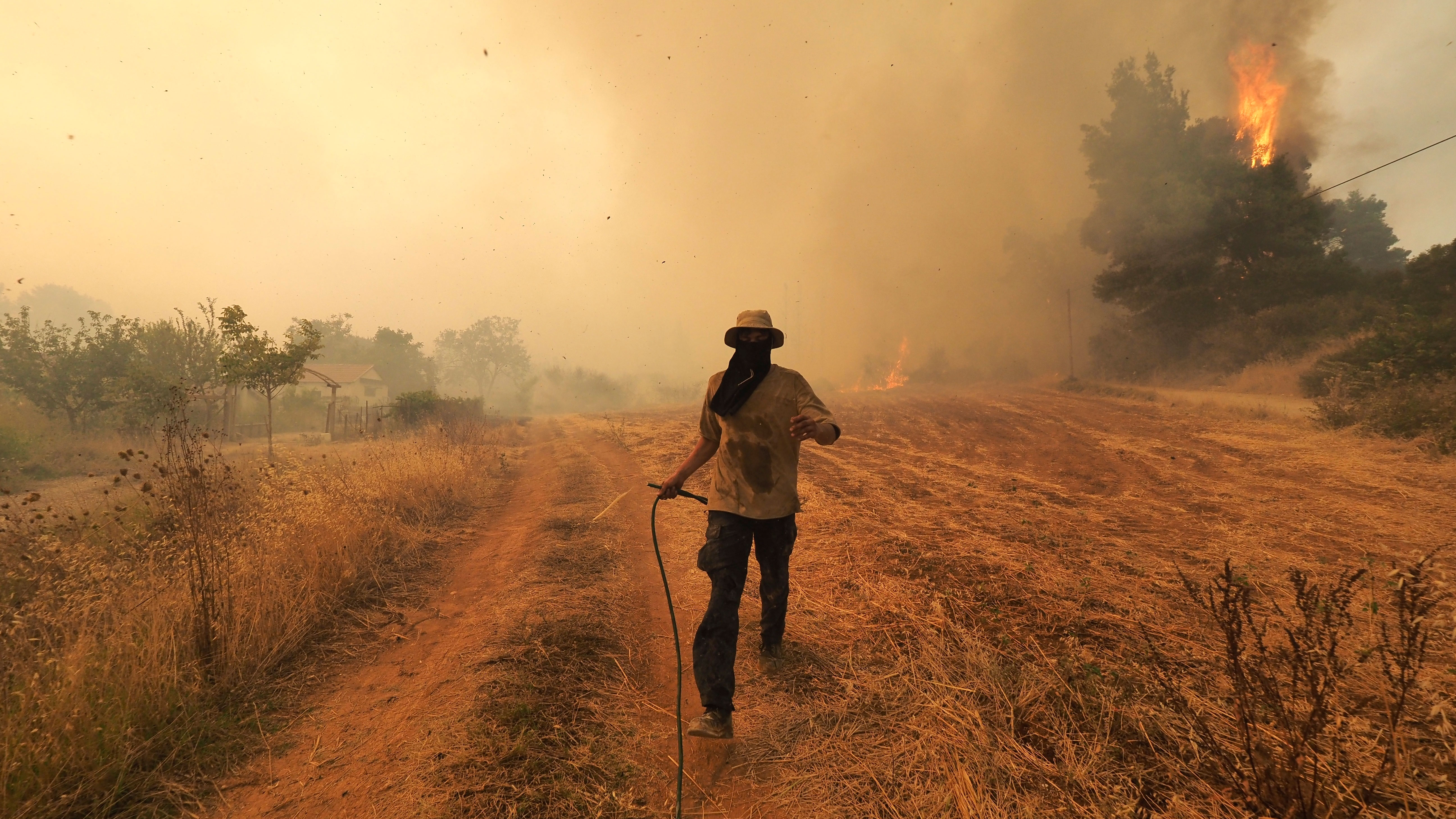 Evacuation orders were issued Sunday for four villages in northern Evia, including Pefki, but many residents refused to leave, hoping to save their properties.

In dramatic scenes Sunday afternoon, fast-moving flames had encroached on the seaside village of Pefki, burning trees on the fringes and entering the houses' yards.

Panicked residents raced with water tanks, hoses and branches in a seemingly futile effort to extinguish the flames. 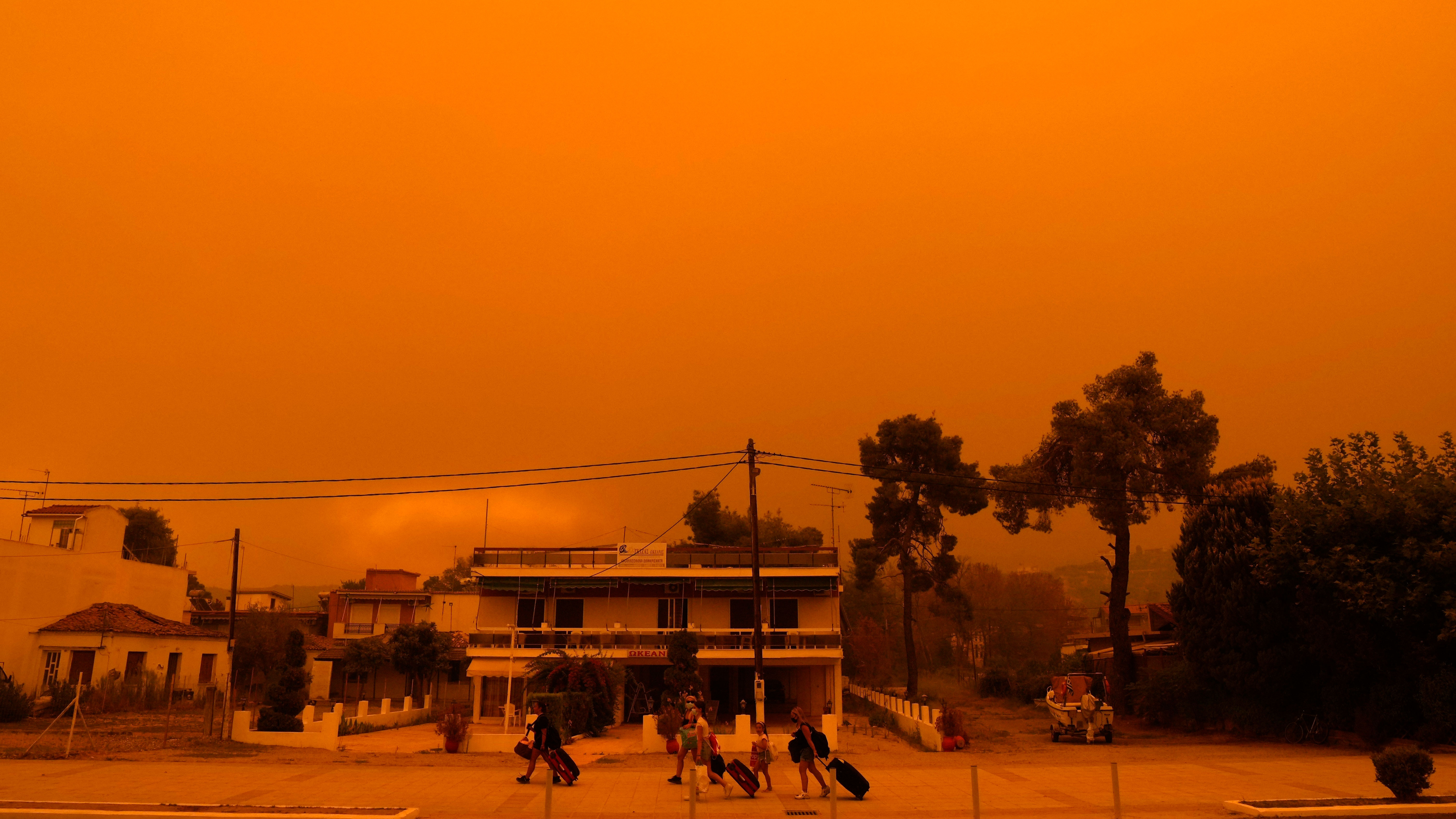 Late Sunday, firefighters managed to stop the fire before it advanced further into Pefki, on the island's northern coast.

Pefki residents and tourists fled to the port of Aidipsos to take the ferry to the mainland port of Arkitsa, 150 kilometres northwest of Athens.

The ferry, carrying panicked, exhausted evacuees who had boarded the vessel before the advance of the fire was halted, arrived at Arkitsa on Sunday evening.

Passengers complained they had been left to fend for themselves as the fire approached. 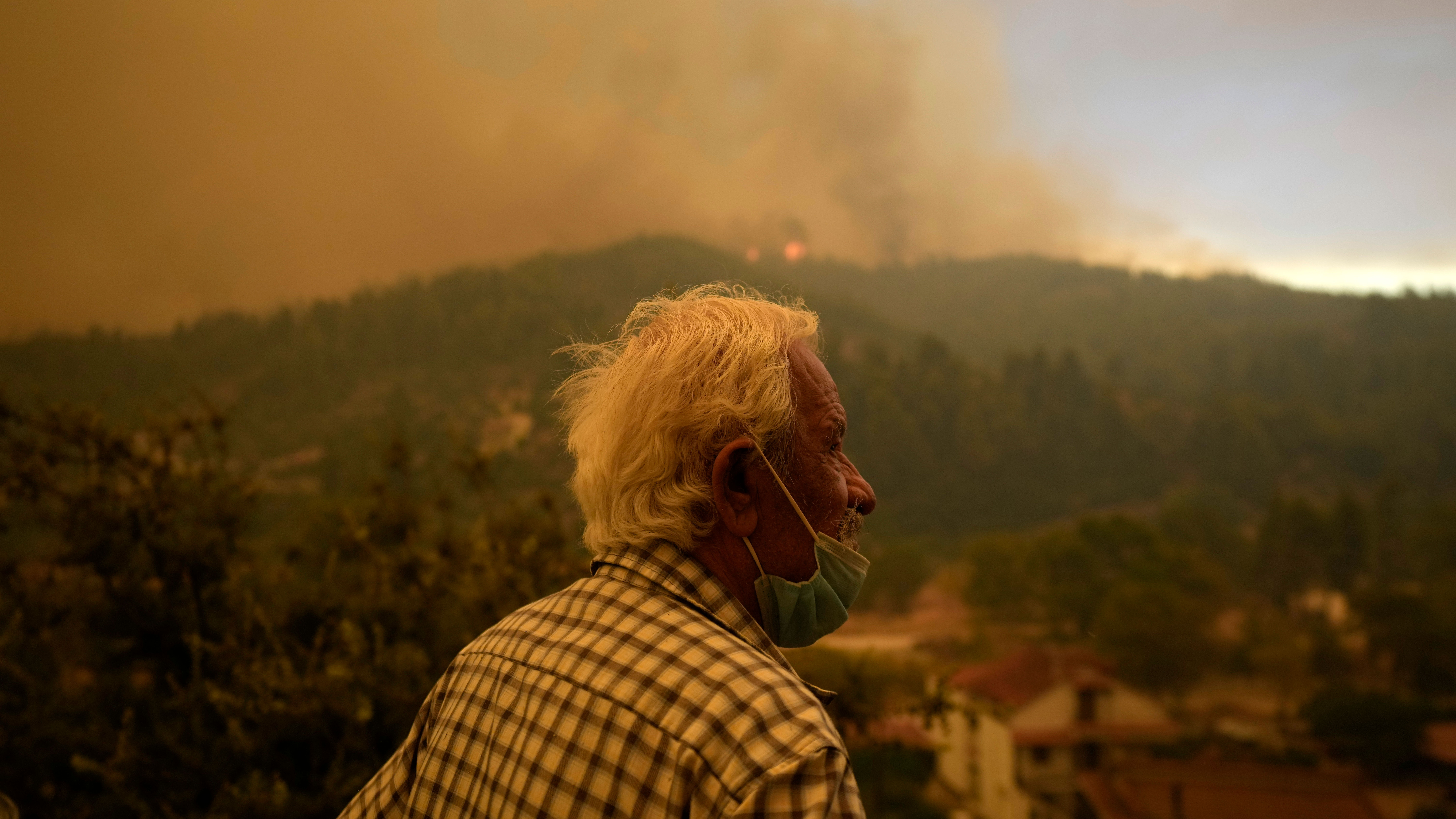 "We were completely forsaken. There were no fire brigades, there were no vehicles, nothing!" David Angelou told The Associated Press, adding that the villagers' hoses were inadequate to stop the fire.

Angelou described the frightening hours before the evacuation.

″You could feel the enormous heat, there was also a lot of smoke. You could see the sun, a red ball, and then, nothing else around," he said.

Angelou's complaint was echoed by others, who decried government efforts, citing what they saw as a lack of firefighting forces or planes or delays in their arrival.

"There was ash and smoke everywhere," said Christina Tsatou, who had been in the seaside village of Agios Georgios. "It is very sad that they did not send help in the first days and they left the island burning. It was unfair and many people have lost their property, their livelihoods." 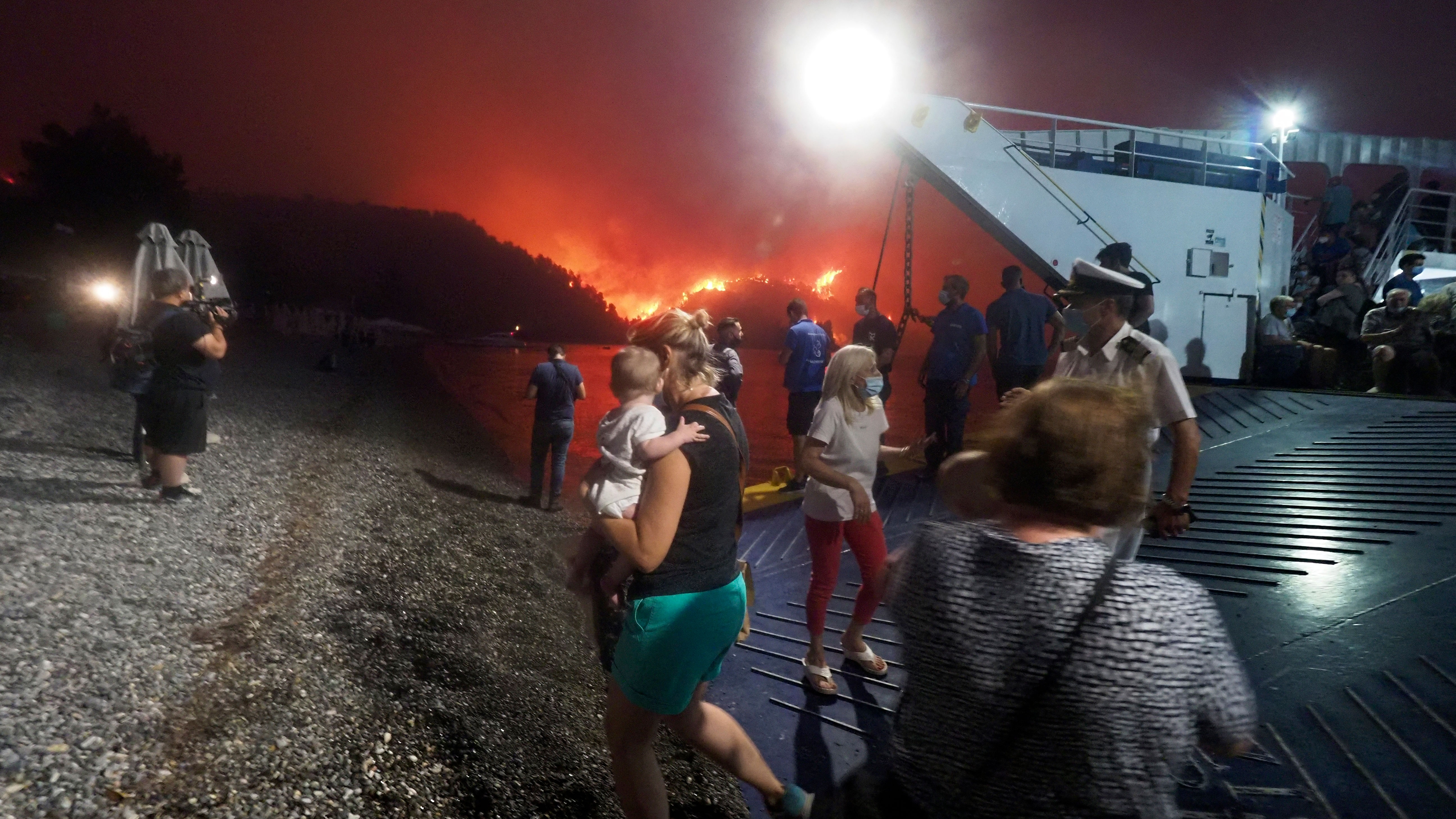 In the picturesque mountain village of Gouves, towering flames leaped from the treetops, devouring the pine forest leading to the village.

Some residents remained, dousing homes with water from garden hoses in a last-ditch effort to save them.

Others used bulldozers to raze trees and bushes, hoping to create rudimentary firebreaks.

Civil Protection chief Nikos Hardalias said the Evia fire was burning on two fronts, one to the north and one to the south.

He said the conditions there were particularly tough for the water-dropping planes and helicopters, whose pilots faced "great danger" with limited visibility and air turbulence.

"We have before us…one more difficult night," Hardalias said.

"All the forces that have been fighting a difficult battle all these days will continue operating with unabated intensity, with the same self-sacrifice."

The wildfires have stretched Greece's firefighting capabilities to the limit, and the government has appealed for help from abroad.

More than 20 countries in Europe and the Mideast have responded, sending planes, helicopters, vehicles and manpower.

Three more major fires were also burning in Greece's southern Peloponnese region, while another broke out Sunday afternoon on the southern island of Crete.

Another massive fire that ravaged forests, homes and businesses on the northern fringes of the Greek capital appeared to be on the wane.

That blaze burnt through large tracts of a national park on Mount Parnitha, the largest forested area remaining near Athens.

Firefighters were worried that the Mount Parnitha fire would rekindle, so they and the military had been patroling all night, Hardalias said.

On Friday, a volunteer firefighter died after suffering head injuries from a falling electric pole north of Athens, while at least 20 people have been treated for fire-related injuries, including two firefighters hospitalized in intensive care.

The causes of the fires are under investigation. At least eight people have been arrested around Greece.

Greek and European officials have also blamed climate change for the large number of fires in southern Europe this summer, from Italy to the Balkans, Greece and Turkey.

Massive fires also have been burning across Siberia in northern Russia for weeks, forcing the evacuation Saturday of a dozen villages. In all, wildfires have burned nearly 15 million acres this year in Russia.

In the US, hot, dry, gusty weather has also fueled devastating wildfires in California.