Queensland has clamping down on travel to New South Wales border towns after a lockdown as sparked by a man travelling from Sydney to Byron Bay with COVID-19.

Premier Annastacia Palaszczuk said there will be more police on the border to ensure residents aren't visiting Byron Shire, Lismore, Ballina Shire and Richmond after a snap lockdown was announced until August 17.

New South Wales border zone residents can only cross the Queensland border for a permitted purpose, with the same rule for Queenslanders going to south. 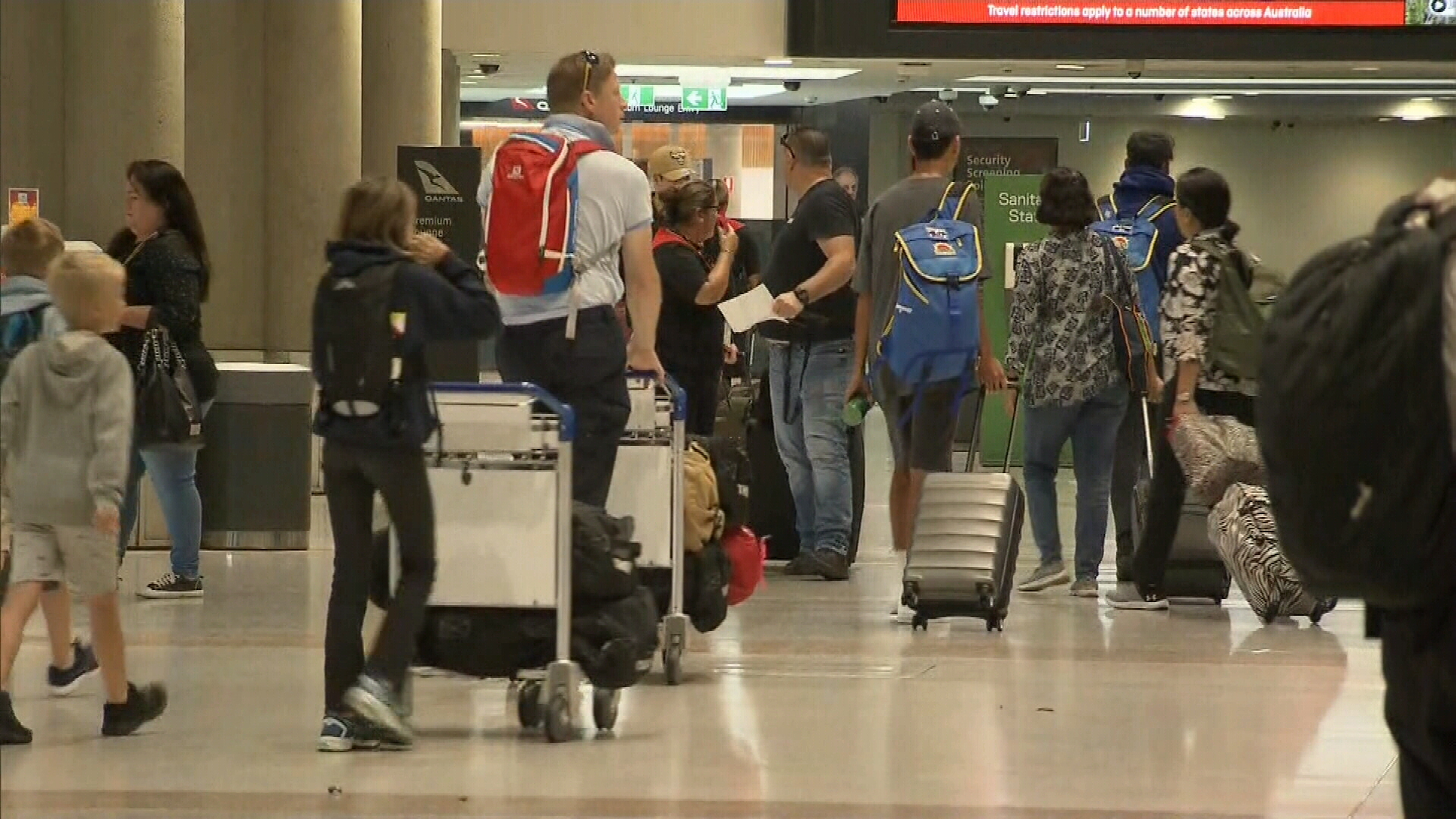 Below is a breakdown of how all the states and territories are reacting to outbreaks.

READ MORE: Everything you need to know about the lockdown for Greater Sydney

While NSW is essentially closed off from the rest of Australia, there are still rules in place for arrivals from a number of jurisdictions.

Entry to NSW is restricted when a NSW Health concerns notice identifies interstate hotspots, affected areas and places of concern.

People travelling from Cairns and nearby Yarrabah, Queensland where an unvaccinated taxi driver was diagnosed with the virus must now isolate for 14 days on entering.

People from close contact locations are not permitted to enter NSW unless they are a returning resident or travelling to the ACT, and they must self-isolate for 14 days.

People who have been to casual contact locations are not permitted to enter NSW unless they are a returning resident, travelling to the ACT, or have returned a negative COVID-19 test since being to the location.

The list of close and casual contact venues for Queensland, Victoria and South Australia, can be found on the COVID-19 concerns notice.

All of Victoria and South Australia have also been declared areas of concern.

No travel restrictions apply to other Australian jurisdictions.

Residents in the Victorian-NSW border bubble will only be able to enter Victoria without a permit for six essential reasons from 11.59pm on August 3.

They include medical care, compassionate reasons, work, education, playing sport or getting vaccinated.

Border visitors are not able to travel beyond their necessary destination.

The government has also expanded red zones to keep potentially infected people from NSW out of the state.

All of Greater Sydney and Wollongong are considered red zones, meaning people from there will not be able to enter Victoria.

Regional areas of NSW and the ACT were also declared orange zones.

This means Victoria's Travel Permit System came back into effect for anyone travelling from those areas.

"This is not retrospective," Victoria Health clarified.

"If you travel from ACT or regional NSW (not including communities in border bubble), then you need an orange zone permit to enter Victoria." Health Minister Martin Foley said people entering the state unlawfully will be turned back at the airport.

"Do not fly into a red zone if you are from Victoria and if you are not Victorian and you have been in a red zone," he said.

"You may indeed have to stay in hotel quarantine if there is no return flight for you at that time."

That means non-Victorian residents who have been in the areas in the past two weeks are banned from entering the state and Victorians will have to get a red zone permit and quarantine at home for 14 days.

Victoria has published a list of testing sites online.

Western Australia's border is shut to much of Australia, with Queensland, NSW, South Australia and Victoria all classified as medium risk jurisdictions.

Visitors from medium-risk jurisdictions are only permitted to enter with a special exemption and must quarantine for 14 days.

The ACT is a "low-risk" jurisdiction, meaning anybody who enters must also quarantine for 14 days, but no exemption is required.

The Northern Territory, Tasmania and New Zealand are "very low-risk", meaning that while travellers must fill out a declaration form, they do not have to quarantine.

The border with NSW was imposed in June when the latest outbreak began.

"We can't run the risk of this being imported into Western Australia," Premier Mark McGowan said then.

"I can't run the risk of the virus coming in, us going into lockdown, and people potentially dying."

South Australia has closed the border to travellers from Victoria, Greater Brisbane, the ACT, and NSW – with the exception of the Broken Hill LGA.

Travellers who gain an exemption to travel from an exclusion zone must quarantine for 14 days, receive COVID-19 tests on days one, five and 13, and wear a mask when in contact with the public.

The Victorian cross border zone currently covers 70 kilometres either side of the border with South Australia.

Travellers from all other parts of Queensland may enter South Australia if they have not been to an exclusion zone in the past 14 days. However, they will be required to get tested on days one, five and 13 after their arrival, and self-quarantine until a negative result is received.

All other jurisdictions in Australia are permitted to enter South Australia, provided they have not been to or travelled through an exclusion zone in the past 14 days.

Furniture removalists entering the state will need to provide proof they have had a COVID-19 test in the past 72 hours.

Those arriving from Victoria now have to go into hotel quarantine, he said.

Victoria closed its border to south-east Queensland as cases continue to emerge in the area.

The red zone declaration means Victorians returning home from the affected areas after 8pm on July 31 must quarantine for 14 days.

All of NSW and South Australia are also currently COVID-19 hotspots, with border crossings forbidden.

However, the border bubble with NSW has been re-imposed, meaning people with permitted reasons to travel from certain NSW LGAs can cross the border.

There are warnings of increased patrols now the locked down border towns of Byron Shire, Lismore, Ballina Shire and Richmond.

People from all other jurisdictions are allowed to enter, as long as they have not been in a hotspot in the past 14 days.

All of NSW has been declared a level one high-risk zone for Tasmania.

No arrivals are permitted without an exemption, and those who are allowed in must enter hotel quarantine for 14 days.

Level two still means no arrivals are permitted without exemptions, but exempt travellers may quarantine at a suitable premises of their choice.

All other areas of Queensland remain low-risk.

Travellers who have only spent time in low-risk areas in the past 14 days may arrive in the state freely and do not have to quarantine.

All of Victoria has been declared a level two high-risk area.

Western Australia, South Australia, the Northern Territory and the ACT are all low-risk jurisdictions.

However, Tasmania also updates its travel restrictions by declaring certain premises as high-risk zones even in low-risk states or territories.

Stay up to date with those here.

The Northern Territory has declared all of NSW and Victoria hotspots.

Yarrabah and Cairns in Queensland have also been added.

People who are not returning NT residents that want to enter the territory and quarantine from a hotspot now have to apply for a special permit.

People who need to go there will no longer be given the chance to quarantine at the Howard Springs quarantine facility unless they hold an exemption, Chief Minister Michael Gunner announced.

Anybody who has been in any of those hotspots since July 27 and is currently in the NT, is also ordered to undertake 14 days of supervised quarantine.

There are no restrictions on travel to the NT from anywhere else in Australia, provided they have not been in a hotspot for the past 14 days.

The ACT will now make people coming from much of regional NSW isolate for 14 days.

Anyone who leaves multiple regional NSW areas to go to the ACT will need an exemption to enter and must undergo 14 days of quarantine.

The rules include the areas under lockdown and additional areas where COVID-19 has been detected in wastewater.

Officials said they were taking a "conservative approach".

All of Greater Sydney, along with the Central Coast, Wollongong, Blue Mountains and Shellharbour, remain under the same restrictions.

Only ACT residents can enter the region unless they get an exemption.

People can quarantine at home.

You can find out more details about how to book your vaccine through the Federal Government health site here.