There are few words which prompt such a visceral reaction as incest.

"Most people hear the word and it creates shudders … people really don't want to want to talk about it – it's taboo," Karen Keavy, a counsellor specialising in child trauma, says.

For Lacy*, who was sexually abused as an eight-year-old by her father, the shame and stigma made it excruciatingly difficult to speak out.

And, when she did, it became all too easy for her cries for help to be ignored.

"It absolutely made it so, so hard – and all the more isolating. There was the shame and the guilt, not being able to speak about what had happened, and being silenced," Lacy said.

Yet figures show family members are the most common perpetrators of sexual violence against children. 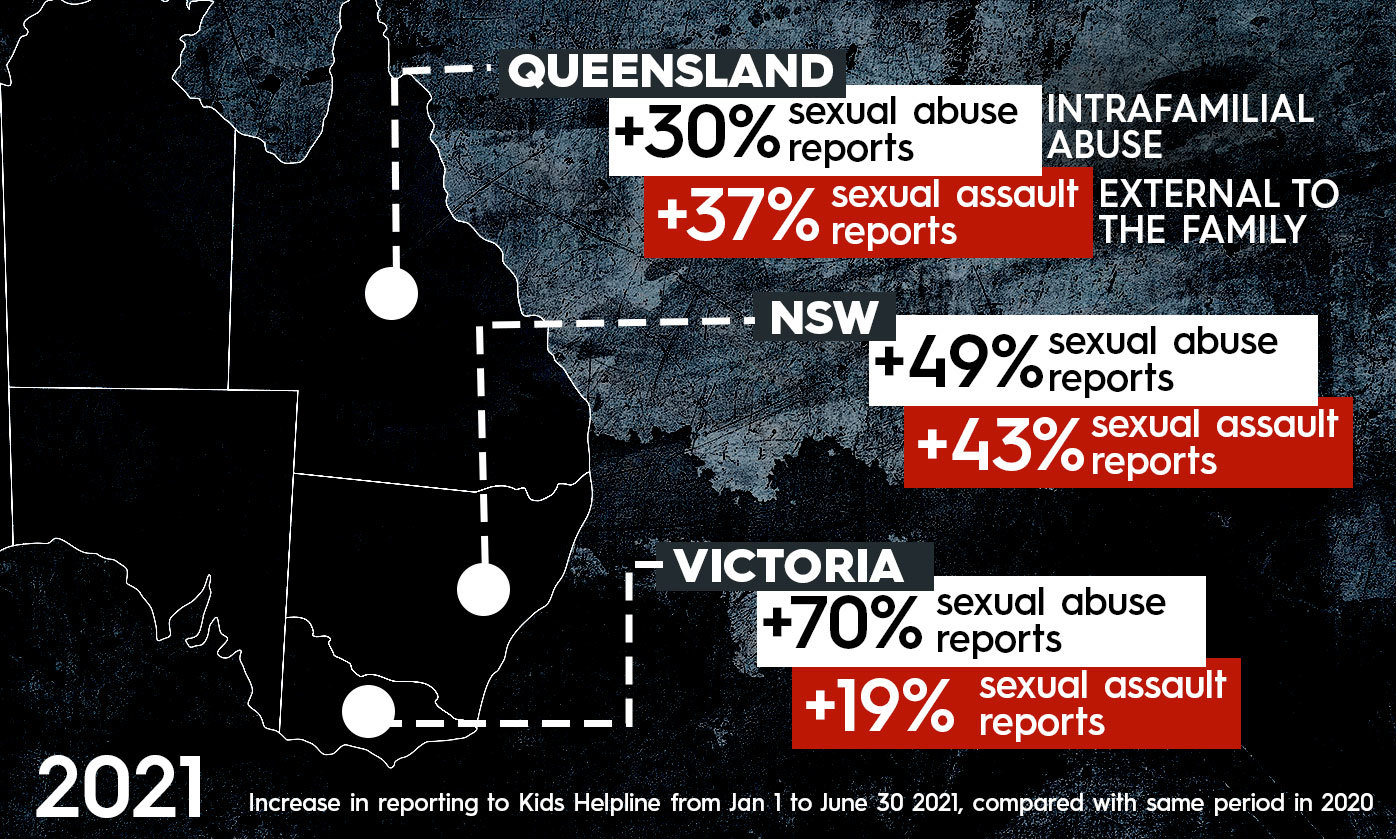 Recent statistics released by counselling service Kids Helpline – and compiled before the most recent lockdowns in Sydney, Victoria and Queensland – also suggest more parents than ever are abusing their kids while they are cloistered in their homes during the pandemic.

The number of calls made to Kids Helpline about sexual abuse in the home increased by 49 per cent nationally between January and the end of June this year, when compared to the same time last year.

The spike saw a total of 662 calls made by children and young people raising the issue of being sexually exploited by family members, 210 more than 12 months ago.

The trend was most pronounced in Victoria, which has seen six lockdowns. There, reports of sexual abuse in the home to Kids Helpline soared by 70 percent. In NSW, the increase was 49 percent, and in Queensland 30 percent. 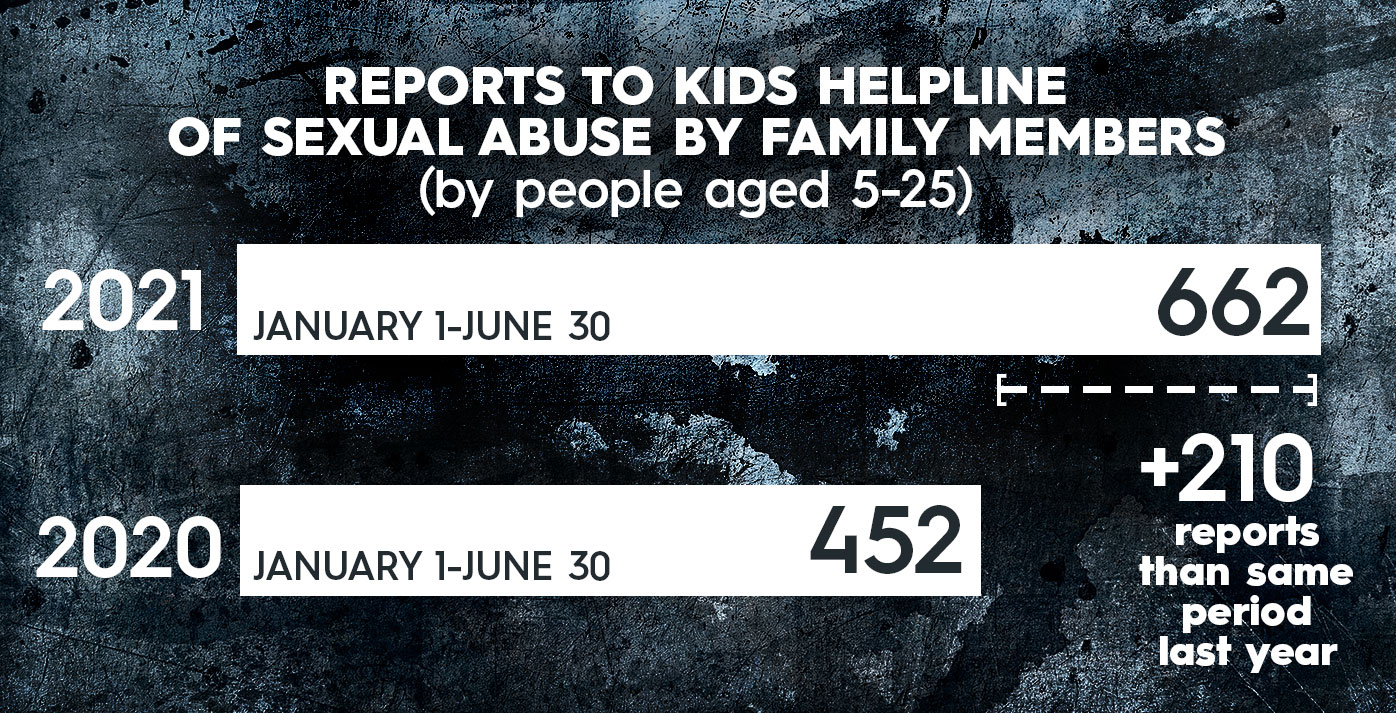 Kids Helpline CEO Tracy Adams describes the increase as "a pandemic within a pandemic".

"The COVID-19 pandemic has affected daily life through restrictions on people's movements and interactions, potentially limiting opportunities for child abuse to be detected and reported.

"It is uncomfortable to think children are being sexually abused by those who have responsibility to care for them most, but Kids Helpline statistics for the past six months highlight the vulnerabilities children have in their own homes."

Ms Keavy, a former primary school teacher who up until last year worked as a counsellor in South Australian primary schools and high schools, said the statistics were almost certainly "just the tip of the iceberg".

"What we're actually seeing here are statistics from kids who have had the confidence to speak out and get help," she said.

"But my great concern is about kids that don't have the language, don't have the education, don't even realise that what they're experiencing, particularly with intra-familial sexual abuse, is just that, that it's abuse, and that it's wrong and that they need to seek help."

Lacy, who is now a mother, said her father, a teacher, was known as being charismatic and an active member of the community she grew up in.

"He was seen as a teacher who approachable and went above and beyond for some of the more challenged students," she said.

But there were rumours of inappropriate behaviour swirling around about her dad, which grew more persistent over the years.

"It was nothing that was ever very concrete, but it was enough that people were raising their eyebrows," Lacy said.

The talk spread amongst the students, and Lacy was bullied with schoolyard chants calling her dad "a pervert".

"There was a time when some kids asked me, "Does he do it to you? And that was one of the most horrifically embarrassing moments of my life," Lacy said.

"I do remember saying, 'No, leave me alone. How dare you.' I remember being defensive and I remember trying to block it out, but then … it was coming to light to me that this was real – and I never wanted it to be real."

Lacy says she had a close relationship to her dad before the abuse started.

"My dad probably had more one-on-one time with me than a lot of fathers had with their children at that time," she said.

"But as soon as he started abusing me, that relationship became extremely difficult, and over time morphed into something that was just untenable, that I couldn't live with."

Not long after the abuse started, eight-year-old Lacy did try to tell her mother. That same year Lacy also called a crisis hotline.

Again, the words failed her.

"I just couldn't get it out. I was so embarrassed, ashamed and I had no narrative for it."

Lacy instead told the counsellor about the bullying she was going through at school and made no mention of the horrific abuse she was enduring at home at the hands of her father.

Lacy's full story will be featured later this month on a new podcast called No Laughing Matter in which comedians Adam Hills, Fiona O'Loughlin and Jean Kittson narrate the stories of incest victims.

An online fundraiser has been set up to help raise money for future programming.

The first is for a dedicated online national counselling service to deal with incest. The second is for better education in schools about the topic.

Ms Keavy said school curriculums needed to be urgently reviewed, especially in light of increasing sexual abuse within the home.

"Education is so important because it's when we teach young kids the language to use and who to speak up to," Ms Keavy said.

Children needed to be encouraged to develop safe networks which included non-family members, she added.

In this year's federal budget, $146 million was allocated over four years for a National Strategy to prevent Child Abuse, a key recommendation stemming from the Royal Commission into child sexual abuse.

A spokesperson for the Federal Education Department said the Australian curriculum, which is currently being reviewed, supports students to develop protective behaviours.

"Students are taught to develop protective behaviours and apply strategies that can be used in situations that make them feel uncomfortable or unsafe," the spokesperson said.