The Taliban has seized three more Afghan provincial capitals and a local army headquarters to complete a blitz across the country's north-east, giving them control of two-thirds of the nation as the US and NATO finalise their withdrawal after decades of war.

The fall on Wednesday of the capitals of Badakhshan and Baghlan provinces to the north-east as well as Farah province to the west put increasing pressure on the country's central government to stem the tide of the advance, even as its lost a major base in Kunduz.

Afghan President Ashraf Ghani rushed to Balkh province, already surrounded by Taliban-held territory, to seek help in pushing back the insurgents from warlords linked to allegations of atrocities and corruption. He also replaced his army chief of staff. While the capital of Kabul has not been directly threatened in the advance, the stunning speed of the offensive raises questions of how long the Afghan government can maintain the control of the slivers of the country it has left.

The government may eventually be forced to pull back to defend the capital and just a few other cities.

"I think what I would say to President Ghani is if you remain spread out everywhere, the Taliban will be able to continue to apply their current approach with success," warned Ben Barry, the senior fellow for land warfare at the International Institute for Strategic Studies.

The success of the Taliban offensive also calls into question whether they'd ever rejoin long-stalled peace talks in Qatar aimed at moving Afghanistan toward an inclusive interim administration as the West hoped.

Instead, the Taliban could come to power by force — or the country could splinter into factional fighting like it did after the Soviet withdrawal in 1989.

The multiple fronts of the battle have stretched the government's special operations forces — while regular troops have often fled the battlefield — and the violence has pushed thousands of civilians to seek safety in the capital. The US military, which plans to complete its withdrawal by the end of the month, has conducted some airstrikes but largely has avoided involving itself in the ground campaign.

Humayoon Shahidzada, a lawmaker from the western province of Farah, confirmed Wednesday to The Associated Press his province's capital of the same name fell.

Taliban fighters dragged the shoeless, bloody corpse of one Afghan security force member through the street, shouting: "God is great!"

Taliban fighters carrying M-16 rifles and driving Humvees and Ford pickup trucks donated by the Americans rolled through the streets of the capital.

"The situation is under control in the city, our mujahedeen are patrolling in the city," one Taliban fighter who did not give his name said, referring to his fellow insurgents as "holy warriors."

The crackle of automatic weapon fire continued throughout the day in Farah.

Hujatullah Kheradmand, a lawmaker from Badakhshan, said the Taliban had seized his province's capital, Faizabad.

An Afghan official, who spoke on condition of anonymity to speak about an unacknowledged loss, said Baghlan's capital, Poli-Khumri, also fell.

The Afghan government and military did not respond to repeated requests for comment about the losses. 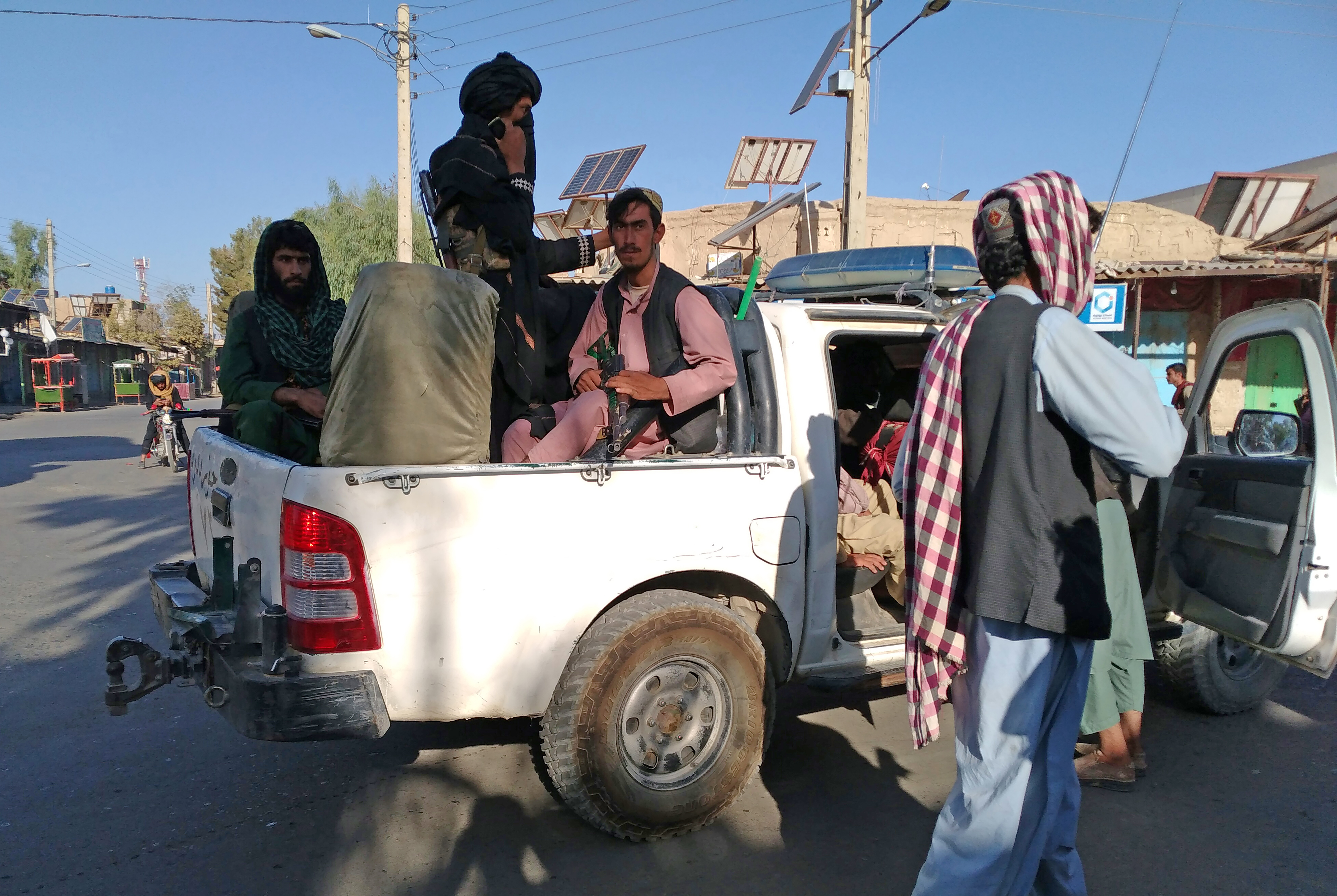 The insurgents earlier captured six other provincial capitals in the country in less than a week.

On Wednesday, the headquarters of the Afghan National Army's 217th Corps at Kunduz airport fell to the Taliban, according to Ghulam Rabani Rabani, a provincial council member in Kunduz, and lawmaker Shah Khan Sherzad. The insurgents posted video online they said showed surrendering troops.

The province's capital, also called Kunduz, was already among those seized, and the capture of the base now puts the country's north-east firmly in Taliban hands.

It wasn't immediately clear what equipment was left behind for the insurgents, though a Taliban video showed them parading in Humvees and utilities. Another video showed fighters on the airport's tarmac next to an attack helicopter without rotor blades.

In southern Helmand province, where the Taliban control nearly all of the capital of Lashkar Gar, a suicide car bomber targeted the government-held police headquarters, provincial council head Attaullah Afghan said. The building has been under siege for two weeks.

The rapid fall of wide swathes of the country to the Taliban raises fears that the brutal tactics they used to rule Afghanistan before will also return, including severe curtailing of women's rights.

Some civilians who have fled Taliban advances have said that the insurgents imposed repressive restrictions on women and burned down schools, and there have been reports of revenge killings. In the face of the rapid deterioration in Afghanistan, Germany and the Netherlands both announced Wednesday they'd suspend deportations to the country.

Speaking to journalists on Tuesday, a senior European Union official said the insurgents held some 230 districts of the more than 400 in Afghanistan.

The official described another 65 in government control while the rest were contested. The official spoke on condition of anonymity to discuss the internal figures.

In addition to the north-east, much of northern Afghanistan has also fallen to the Taliban, except for Balkh province. There, warlords Abdul Rashid Dostum, Atta Mohammad Noor and Mohammad Mohaqiq planned to mobilise forces in support of the Afghan government to push back the Taliban.

Mr Dostum in particular has a troubled past, facing investigations after the 2001 US-led invasion for killing hundreds of Taliban fighters last year by letting them suffocate in sealed shipping containers.

On Wednesday, he said the Taliban "won't be able to leave north and will face the same fate" as the suffocated troops.

Mr Ghani meanwhile ordered General Hibatullah Alizai to replace General Wali Ahmadzai as the Afghan army chief of staff, according to an Afghan official who spoke to the AP and local media reports. The Defence Ministry official spoke on condition of anonymity because the decision had yet to be made public.

Alizai was the commander of the Afghan army's Special Operations Corps — the elite troops that, along with the air force, have been forced to do most of the fighting as regular forces have collapsed.

That's even after a 20-year Western military mission and billions of dollars spent training and shoring up Afghan forces.