Haitian officials have raised the death toll from a deadly weekend earthquake by more than 500 on Tuesday after Tropical Storm Grace forced a temporary halt to search and rescue efforts, a delay that fed growing anger and frustration among thousands who were left homeless.

Grace battered southwestern Haiti, which was hit hardest by Saturday's quake, and officials warned some areas could get 38 centimetres of rain before the storm moved on. Intermittent rain fell in the earthquake-damaged city of Les Cayes and in the capital of Port-au-Prince.

Late on Tuesday afternoon, the Civil Protection Agency raised the death toll to 1,941 and the number of injured to 9,900, many of whom have had to wait for medical help lying outside in wilting heat. 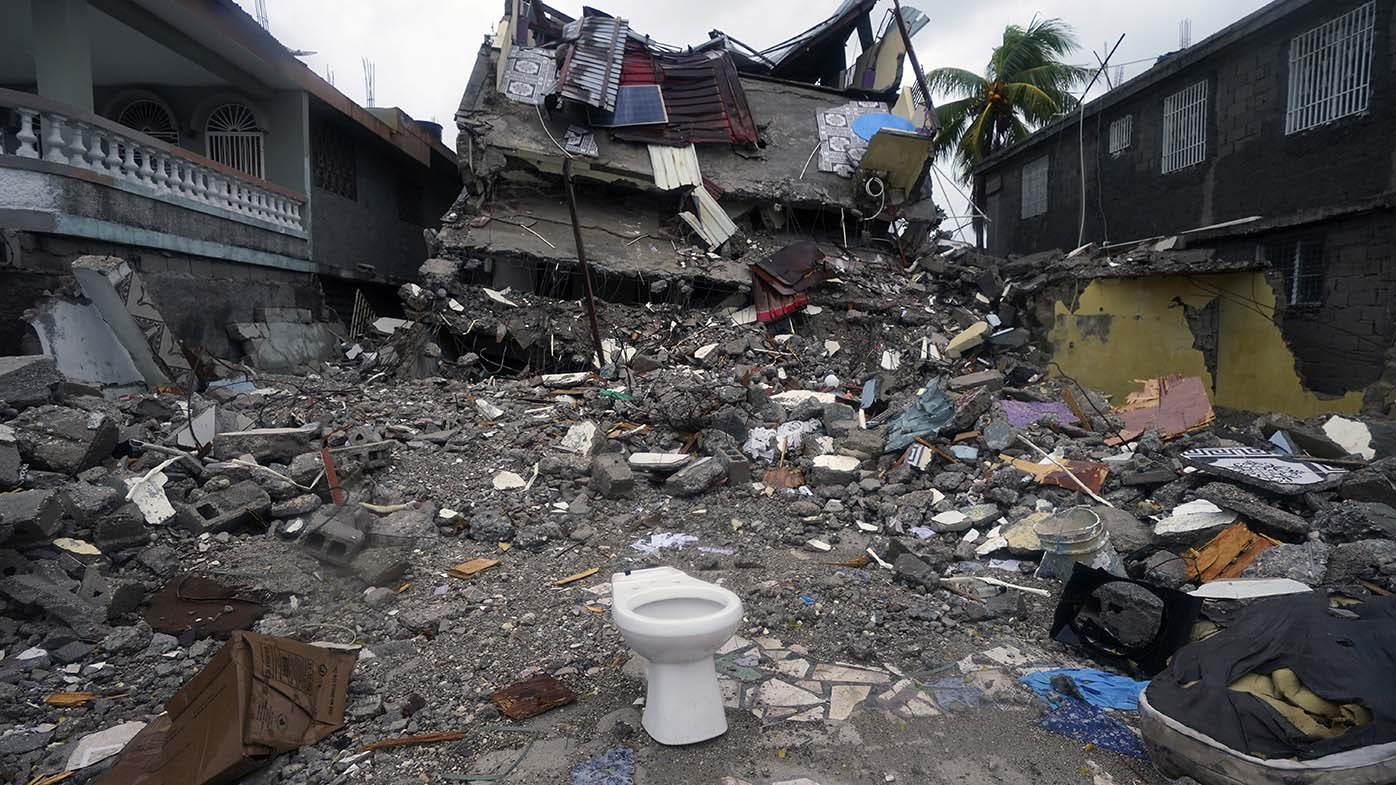 The devastation is centred in the country's southwestern area, where health care has reached capacity and people have lost homes and loved ones.

Patience was running out in the Western Hemisphere's poorest nation. Haitians already were struggling with the coronavirus, gang violence, worsening poverty and the July 7 assassination of President Jovenel Moïse when the quake hit.

Bodies continued to be pulled from the rubble, and the smell of death hung heavily over a pancaked, three-story apartment building. A simple bed sheet covered the body of a three-year-old girl that firefighters had found an hour earlier.

"The mother and father are in the hospital, but all three kids died," he said. The bodies of the other two siblings were found earlier. 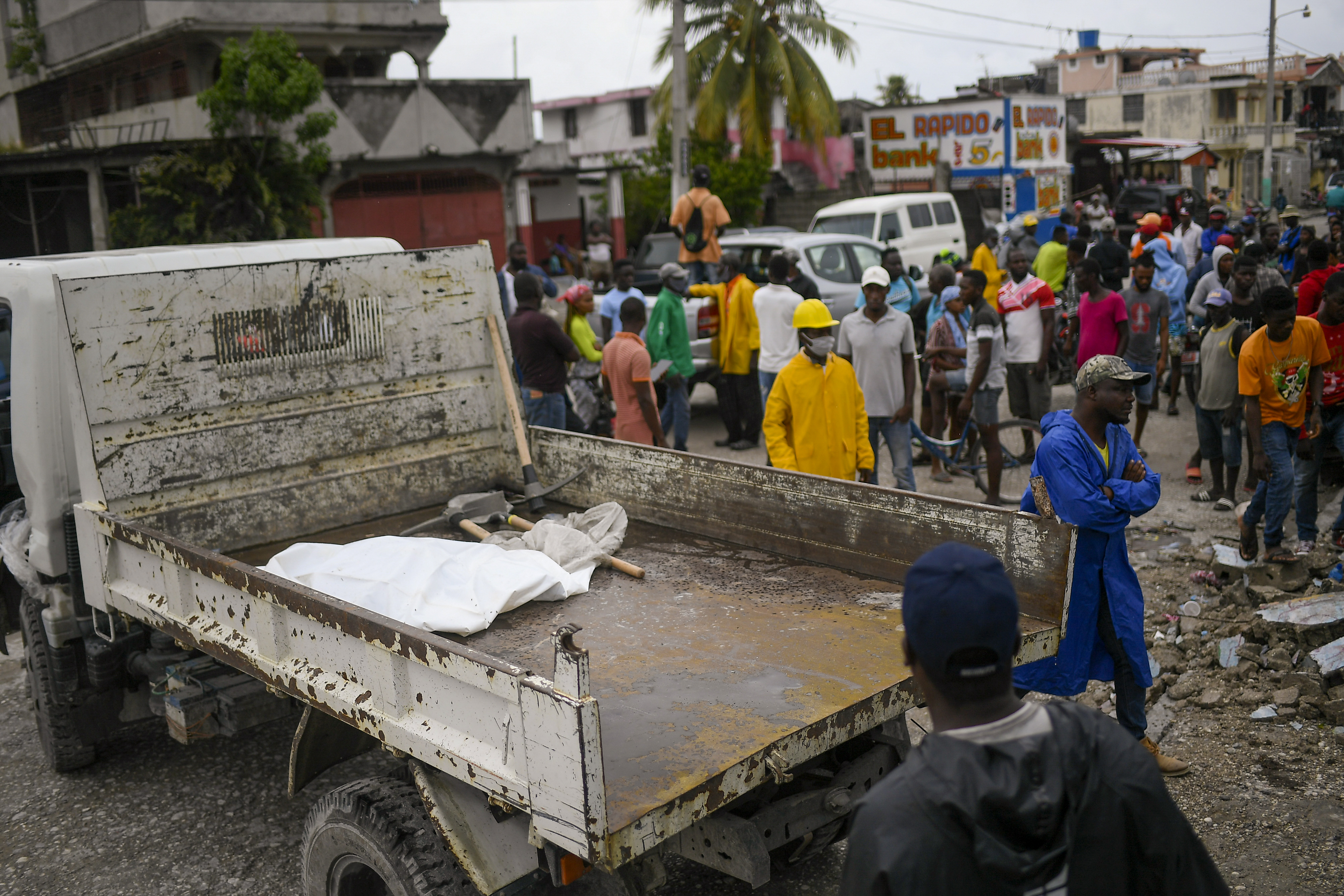 Illustrating the lack of government presence, volunteer firefighters from the nearby city of Cap-Hatien had left the body out in the rain because police have to be present before a body can be taken away.

Another neighbour, James Luxama, 24, repeated a popular rumour at many disaster scenes, saying that someone was sending text messages for help from inside the rubble. But Mr Luxama had not personally seen or received such a message.

A throng of angry, shouting men gathered in front of the collapsed building, a sign that patience was running out for people who have waited days for help from the government.

"The photographers come through, the press, but we have no tarps for our roofs," said one man, who refused to give his name.

The head of Haiti's office of civil protection, Jerry Chandler, acknowledged the situation. Earthquake assessments had to be paused because of the heavy rain, "and people are getting aggressive," Mr Chandler said on Tuesday. Some children were orphaned in the quake and some youngsters were starting to go hungry, Carl-Henry Petit-Frère, a field manager for Save the Children, said which added in a statement that it was distributing what it could to people living on the streets without protection from the wind and rain.

"I see children crying on the street, people asking us for food, but we are low on food ourselves as well," Mr Petit-Frère said, adding that children were warned not to go into houses because they could collapse.

"The organisations that are here are doing what they can, but we need more supplies. Food, clean water and shelter are needed most, and we need them fast."

About 20 soldiers finally showed up to help rescuers at the collapsed apartment building.

Prior to that, the only help that arrived was from poorly equipped volunteers. 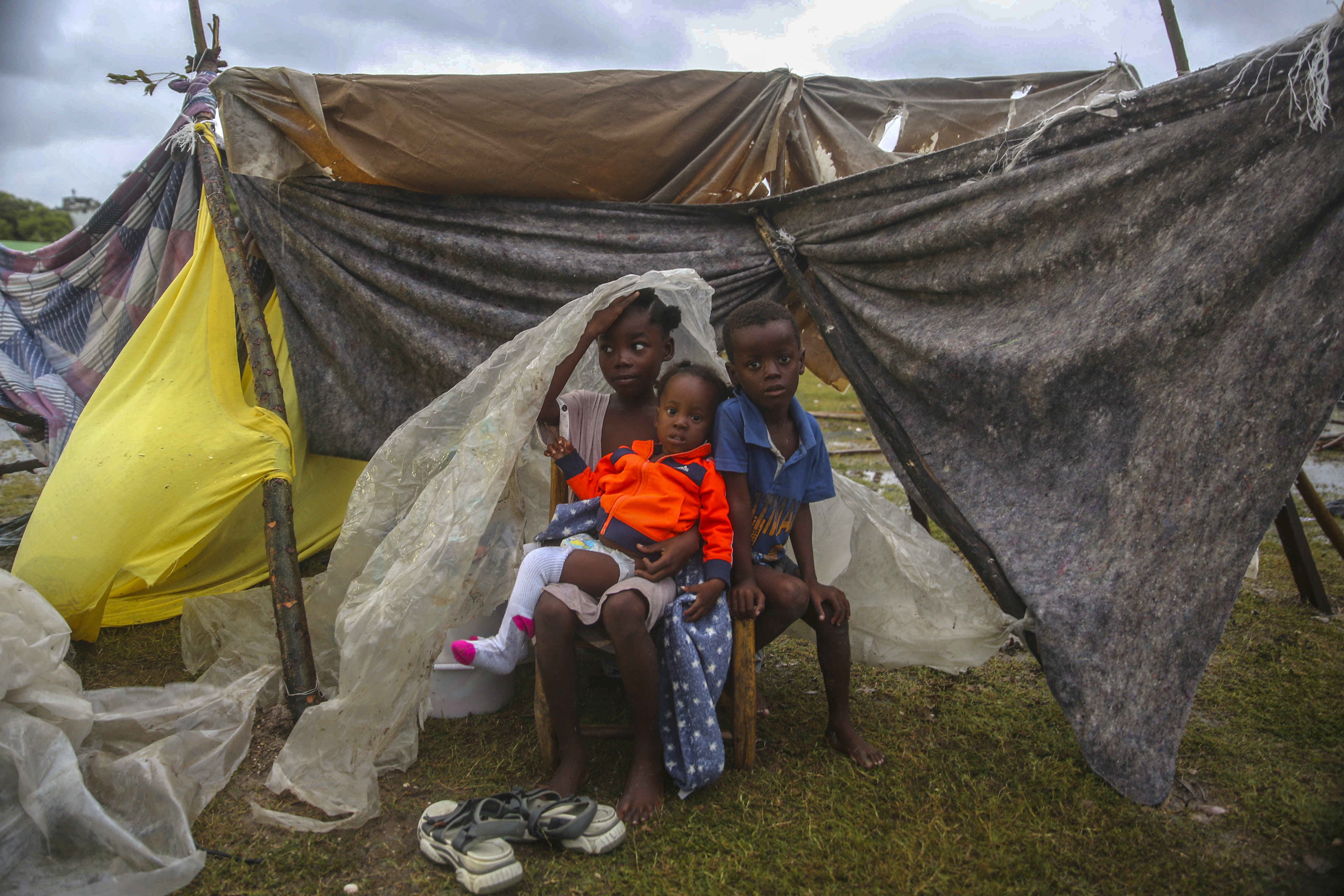 "All we have are sledgehammers and hands. That's the plan," Canadian volunteer Randy Lodder, director of the Adoration Christian School in Haiti, said.

Sarah Charles, assistant administrator for the US Agency for International Development's Bureau for Humanitarian Assistance, said its disaster response teams were forced to suspend operations as the storm arrived on Monday, but members were back from Tuesday to assess its impact and continue helping.

"We do not anticipate that the death toll related to this earthquake will be anywhere near the 2010 earthquake, where more than 200,000 people were killed," Ms Charles told reporters.

The scale of the damage also was not as severe as that earthquake, she said, adding: "That's not what we're seeing on the ground right now."

In a statement, the US military's Southern Command said it was moving eight helicopters from Honduras to Haiti and that seven U.S. Coast Guard cutters were en route to support the USAID team. Two cutters already are there along with two Coast Guard helicopters and US Navy P-8 Poseidon aircraft that are taking aerial images of earthquake devastated areas, the statement said. 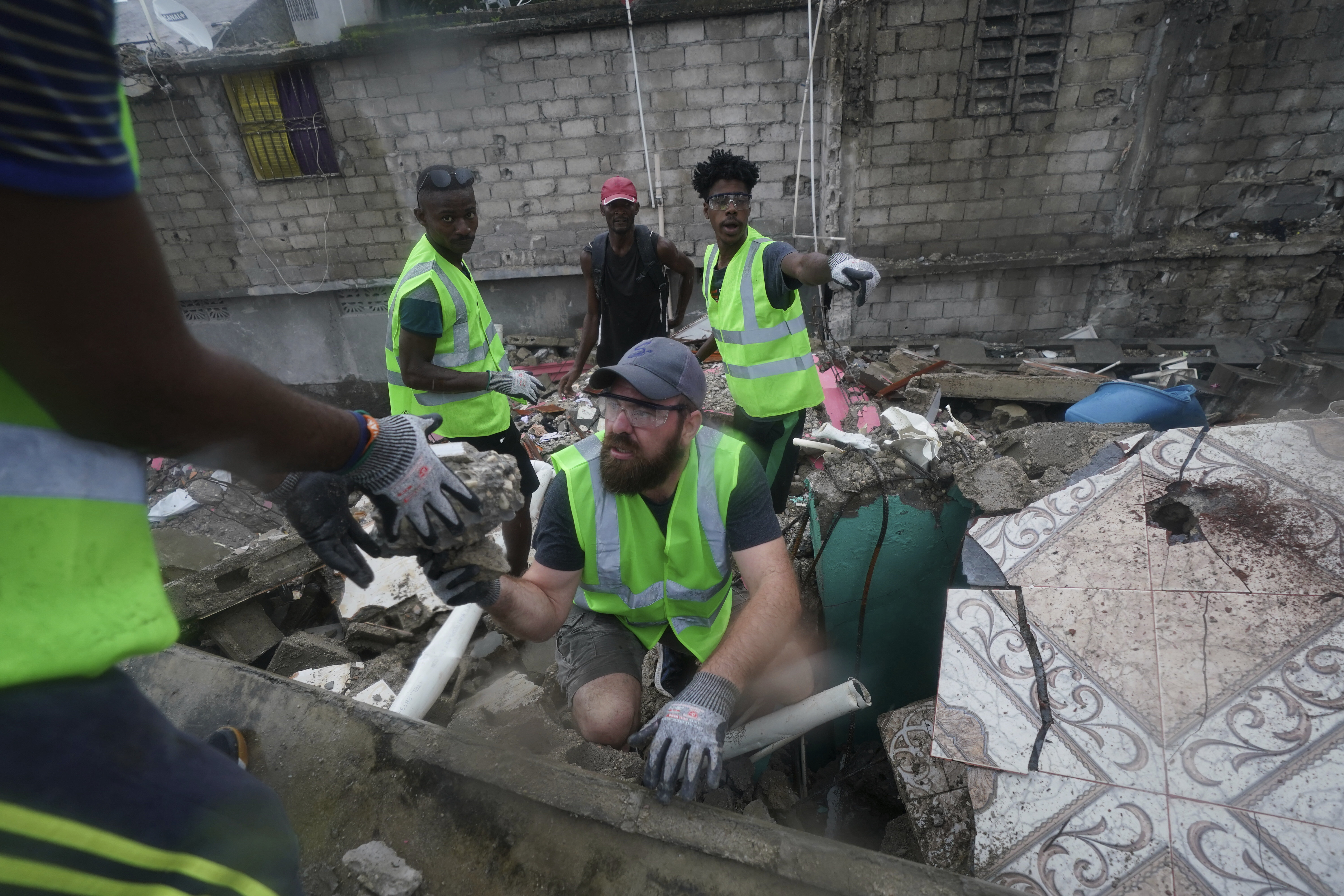 The effort was being mounted "to provide the kind of emergency response that is necessary in a human tragedy and catastrophe like this," US national security adviser Jake Sullivan told reporters at the White House.

"The team reports that food, health care services, safe drinking water, hygiene and sanitation and shelter are all priority needs," Mr Morrison said. He added that the team had not seen any signs of people trapped alive in buildings.

The rain and wind raised the threat of mudslides and flash flooding as Grace slowly passed over southwestern Haiti's Tiburon Peninsula before heading toward Jamaica and south-eastern Cuba.

Forecasters said it could become a hurricane before hitting Mexico's Yucatan Peninsula. 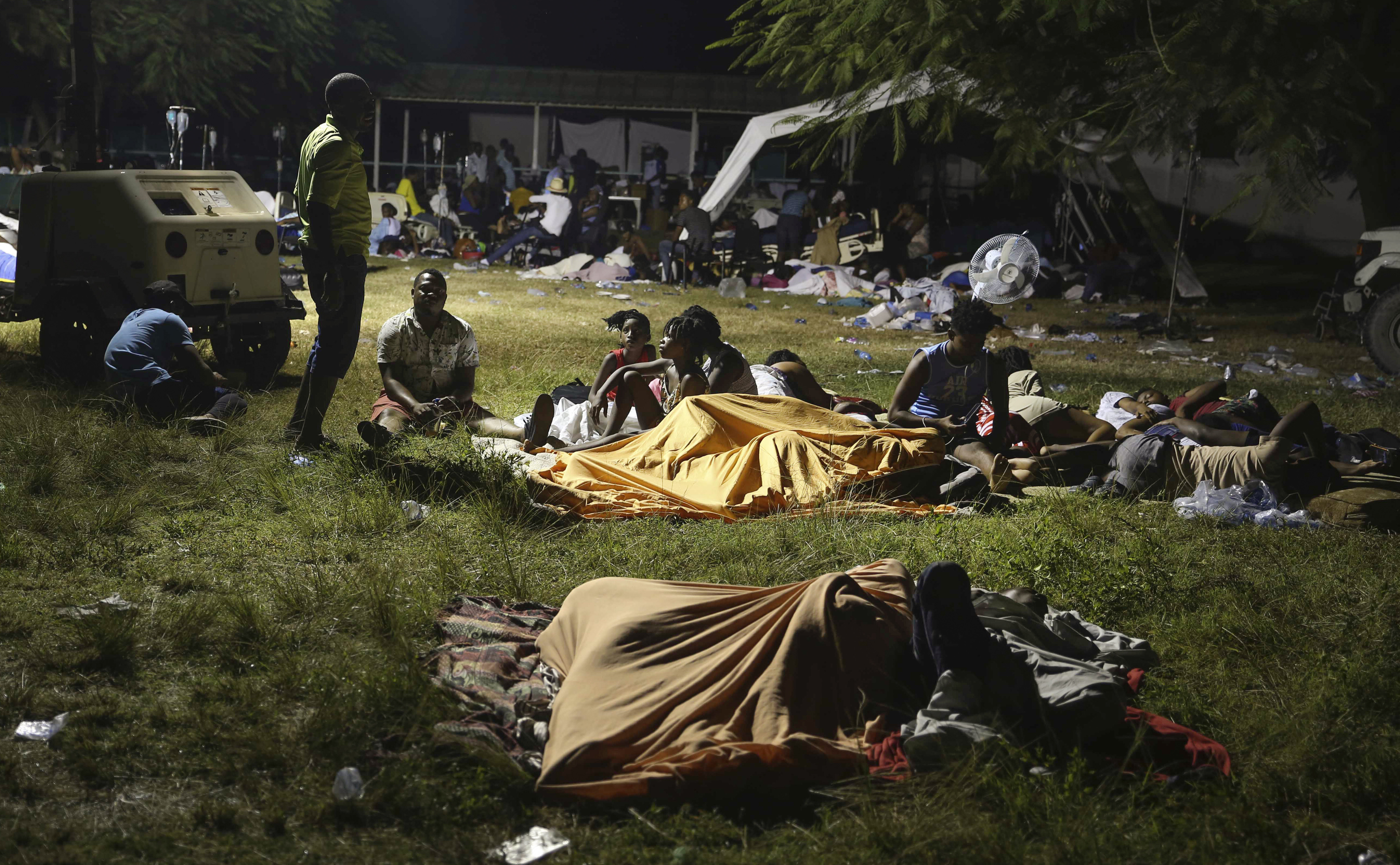 In the village of Bonne Fin, a one-hour drive from from Les Cayes on dirt roads, the mountaintop Hospital Lumiere illustrated the anguish and complexity of Haiti's medical crisis and dire need for outside help.

No one died or was injured at the hospital when the quake hit, but the operating rooms partially collapsed.

Through cracks in a wall, Dr Frantz Codio could see three glistening anaesthesia machines he needed to perform orthopaedic operations on broken bones. But he could not get to them because the building's cement floor was leaning at a crazy angle — in some places just 0.9 meters to 1.2 metres above where it used to be.

Despite warnings not to go inside the structure, Dr Codio did so on Sunday and pulled one of the machines out.

Political instability and gang criminality along the southern roads into the region have particularly hobbled economic activity in recent years.

"The earthquake has just given a fatal blow to a regional economy already on its knees for about two and a half years," Mr Emile said.