With spring just over a fortnight away, meteorologists are predicting a wet season for eastern parts of Australia.

From September to November, rainfall for spring is likely to be above median for the Northern Territory, South Australia, Queensland, New South Wales, Victoria and eastern Tasmania.

Meanwhile, the Bureau of Meteorology predicts western WA and western Tasmania are likely to have below-median rainfall. A negative Indian Ocean dipole, the state of sea surface temperatures across the tropical Indian Ocean, will underpin the predicted wet spring.

According to Weatherzone, there are also signs a weak La Niña-like pattern may further enhance rainfall across Australia in spring.

However, meteorologists predict a full-blown La Niña is unlikely at this stage.

Some parts of Australia will get an early taste of spring, with rainfall predicted in parts of the country today.

Parts of New South Wales will experience chilly temperatures this morning however, temperatures will become warmer as the day progresses.

Morning frost and fog are expected along the state's ranges and slopes.

There is the chance of a shower on the state's far north coast, while it is predicted to be dry and mostly sunny elsewhere.

Sydney can expect a mostly sunny day with light winds. 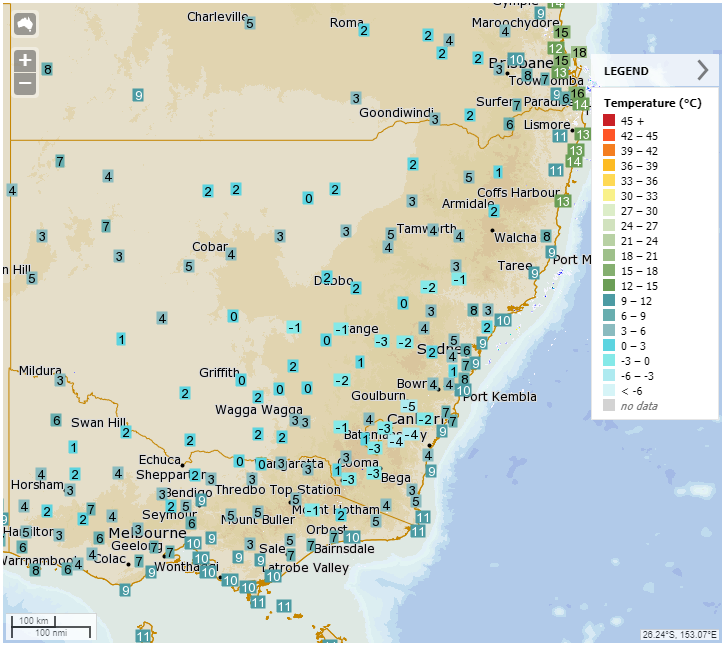 Victorians can expect cloudy conditions throughout most of the state today.

Melbourne will be partly cloudy, with areas of morning fog and a top of 16 degrees.

North-to-north-westerly winds of 15 to 20 kilometres an hour are expected in the city in the middle of the day, before becoming light in the late evening.

A mostly cloudy, cool-to-cold is predicted in the northwest and sunny and cold for residents in the northeast.

There will be sunny conditions for most of Queensland, thanks to a high-pressure system that is brining stable conditions.

Brisbane will be partly cloudy, with a slight chance of a shower.

South Australia will experience showers and cold temperatures in the southeast.

The west and north of the state will experience sunny conditions, with cool-to-mild temperatures.

Adelaide is expected to have be partly cloudy with light winds.

Most of Western Australia will experience cool-to-mild temperatures, while it will be sunny and warm in the north-east of the state.

Perth will be partly cloudy, with the chance of fog early this morning, mainly about the hills.

There will be a medium chance of showers in the city in the morning and early afternoon.

It will be mostly sunny, very warm in the north-west Top End.

There will be a late shower, mild-to-warm in Arnhem.

Meanwhile, there will be windy, mild conditions over the state's interior and sunny, cool-to-mild temperatures in the south.

It will be a humid, mostly sunny day for Darwin, with a top of 33 degrees.

In Tasmania, Launceston will see early fog and frost this morning.

There will be showers, cold in the southwest and windy conditions on the highlands.

The north-east part of the state is expected to experience mostly cloudy, cold conditions.