In just seven days, any lingering dreams of a free Afghanistan died.

As last week dawned, many clung to hope that the Taliban could be held back, though key trade routes had been seized, border crossings overtaken and swaths of remote areas clutched.

But then, in just a week, militants won city after city, toppled the government and grabbed the grand prize of Kabul. On its streets, ads with women in Western clothes were covered in white paint, while men in jeans and T-shirts rushed to change into traditional tunics.

At the US embassy, staff raced to destroy documents as helicopters shuttled away diplomats.

All in seven days.

"The only thing people are thinking about is how to survive here or how to escape," said Aisha Khurram, a 22-year-old headed to class Sunday at Kabul University before being turned back, unsure whether she would ever be able to return, or if females will once again be barred from school.

"The only thing we have is our God."

Even for a country scarred by generations of warfare, it was an astonishing week.

The week dawns with news that insurgents claimed the northern cities of Aybak and Sar-e Pul.

In some districts, pro-government forces surrender without a fight. In others, where firefights sprout, desperate residents are forced from their homes, trudging hundreds of kilometres on foot in exodus.

"We walked with slippers, didn't have the chance to wear our shoes," says Bibi Ruqia, who left northern Takhar province for Kabul after a bomb hit her house.

The fall of Aybak and Sar-e Pul pleases the Taliban fighters; afterward, they are seen on video relishing their victory outside one of the government buildings they now controlled.

But Americans and the Afghan troops they spent years training had reasons to take heart: The cities were just the fourth and fifth provincial capitals to crumble. Twenty-nine more remained. In the sparkling Qatari capital of Doha, American envoy Zalmay Khalilzad arrives with a warning to the Taliban: Any gains made by force would be met with international condemnation and assure their status as global pariahs.

The effectiveness of the diplomacy is diminished, though, by Taliban forces' push into the western city of Farah. They are seen in front of the provincial governor's office.

As the United States' self-imposed August 31 deadline to withdraw its troops nears, the Taliban steadily gains ground while hundreds of thousands are displaced.

Kabul's parks swell with the newly homeless, while the United Nations releases tallies of civilian deaths and injuries they know would only grow. Three more provincial capitals fall in Badakhshan, Baghlan and Farah, giving the Taliban control over two-thirds of the country.

With those regions lost, Afghan President Ashraf Ghani rushes to Balkh province, already surrounded by Taliban-controlled land, to secure help from warlords linked to allegations of atrocities and corruption. But he is desperate to push back the insurgents.

At the White House, President Joe Biden signs off on a plan to mount a full-scale evacuation of Afghans seeking to flee their country after a new intelligence analysis makes clear the country's government and military are unwilling or unable to mount any significant resistance.

Afghan special forces, left to pick up much of the burden of defending multiple fronts, are stretched increasingly thin.

As the Taliban's drive widens, they emerge in more parts of the country carrying M-16 rifles and driving Humvees and Ford utes, equipment paid for by American taxpayers.

READ MORE: Taliban knocked on her door three times. The fourth, they killed her Any hope that the Taliban's successes might be limited to Afghanistan's more remote reaches vanish, as the country's second- and third-largest cities are captured.

With Kandahar and Herat, a dozen provincial capitals are now in the group's grasp. And with security rapidly deteriorating, the US reverses course, announcing 3000 troops will be sent to help evacuate the embassy.

Zahra, a 26-year-old resident of Herat, is on her way to dinner with her mother and three sisters when she sees people running and hears gunshots blast.

"The Taliban are here!" people scream.

She spent most of her life in an Afghanistan where girls got an education and women dared to dream of careers and she had spent the past five years working with nonprofit organisations to press for gender equality.

Now, her last name is shrouded to avoid making her a target, and she hunkers down indoors with her family.

"How can it be possible for me as a woman who has worked so hard and tried to learn and advance, to now have to hide myself and stay at home?" she asks.

Taliban fighters finally break through at Herat after two weeks of attacks. As they move in, witnesses tell of Taliban members once detained in the city's prison are spotted moving freely in its streets. 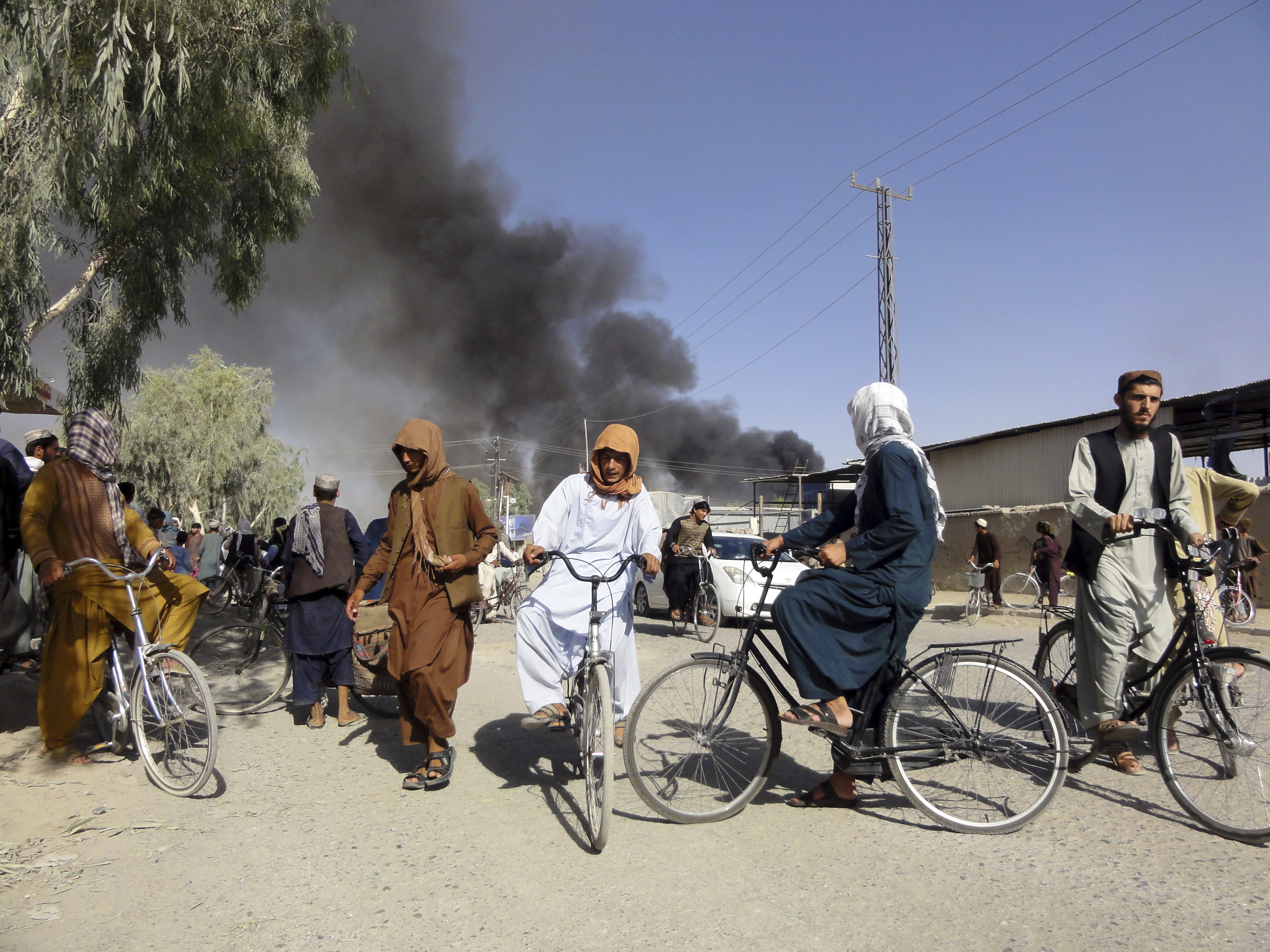 As the Taliban push ever further into the country they once again seek to rule, reports of revenge killings trickle out: A comedian. A government media chief. Others.

Signs of a new day in Afghanistan proliferate.

In Herat, two alleged looters are paraded through the streets with black makeup smeared on their faces, reminders of the unsparing version of Islamic law the Taliban has imposed.

In Kandahar, militants commandeer a radio station that had beamed Pashto and Indian songs into residents' homes, music banned by the Taliban. The tunes stop, abruptly. And the station is renamed Voice of Sharia.

Among them is Helmand province, where American, British and other allied NATO forces fought some of their bloodiest battles. Hundreds of Western troops died there during the war.

Now, many of their families ask why. 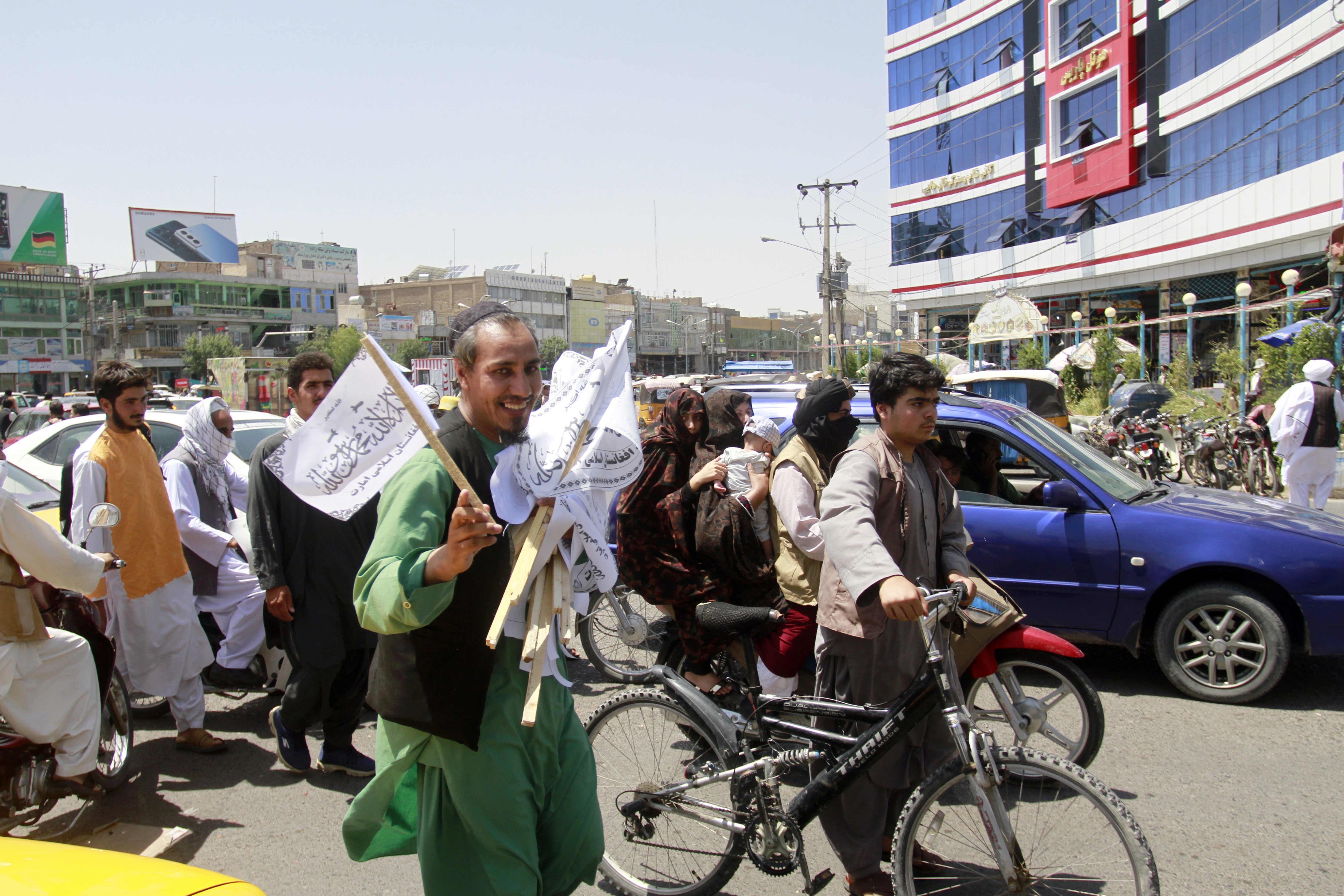 Mr Ghani delivers a televised speech in which he vows not to give up achievements of the 20 years since the Taliban were toppled. But the group pushes forward, notching more victories.

Along the Pakistani border, the provinces of Paktika and Kunar fall. In the north, Faryab province is taken. And in the country's centre, Daykundi is captured.

Biggest of all, Mazar-e-Sharif — the country's fourth-largest city, a heavily defended swath that government forces had pledged to defend — is now under Taliban control.

The unfolding disaster prompts a statement from President Joe Biden, standing firm in his decision to finish the withdrawal of U.S. forces that began under Donald Trump.

"I was the fourth president to preside over an American troop presence in Afghanistan — two Republicans, two Democrats," he said.

"I would not, and will not, pass this war onto a fifth."

In Kabul, long lines form outside the international airport. Afghans seeking to flee push carts loaded with carpets, televisions and mementos as they waited hours to enter the terminal. On normal days, Afghans in business suits and traditional dress mingle beside tattooed military contractors in wraparound sunglasses and aid workers from across the globe. Now, the panicked masses fill the airport, scrambling to leave.

Farid Ahmad Younusi abandoned his Kandahar contracting firm for a chance to escape. Everything he built, he says, now appeared to be lost, and militants were searching for him.

"Taliban have everything that I worked for over the past 20 years," he says.

In sight of the airport, the mountains ringing the capital rise in the distance as the walls seem to close in. As Saturday wears on, news arrives of new Taliban wins.

Just south of the capital, Logar province falls. To the north, insurgents take Mihterlam, reportedly without a fight. Members of the Taliban are reported in the Char Asyab district, just 11 kilometres from Kabul.

The city's fate seems all but sealed. 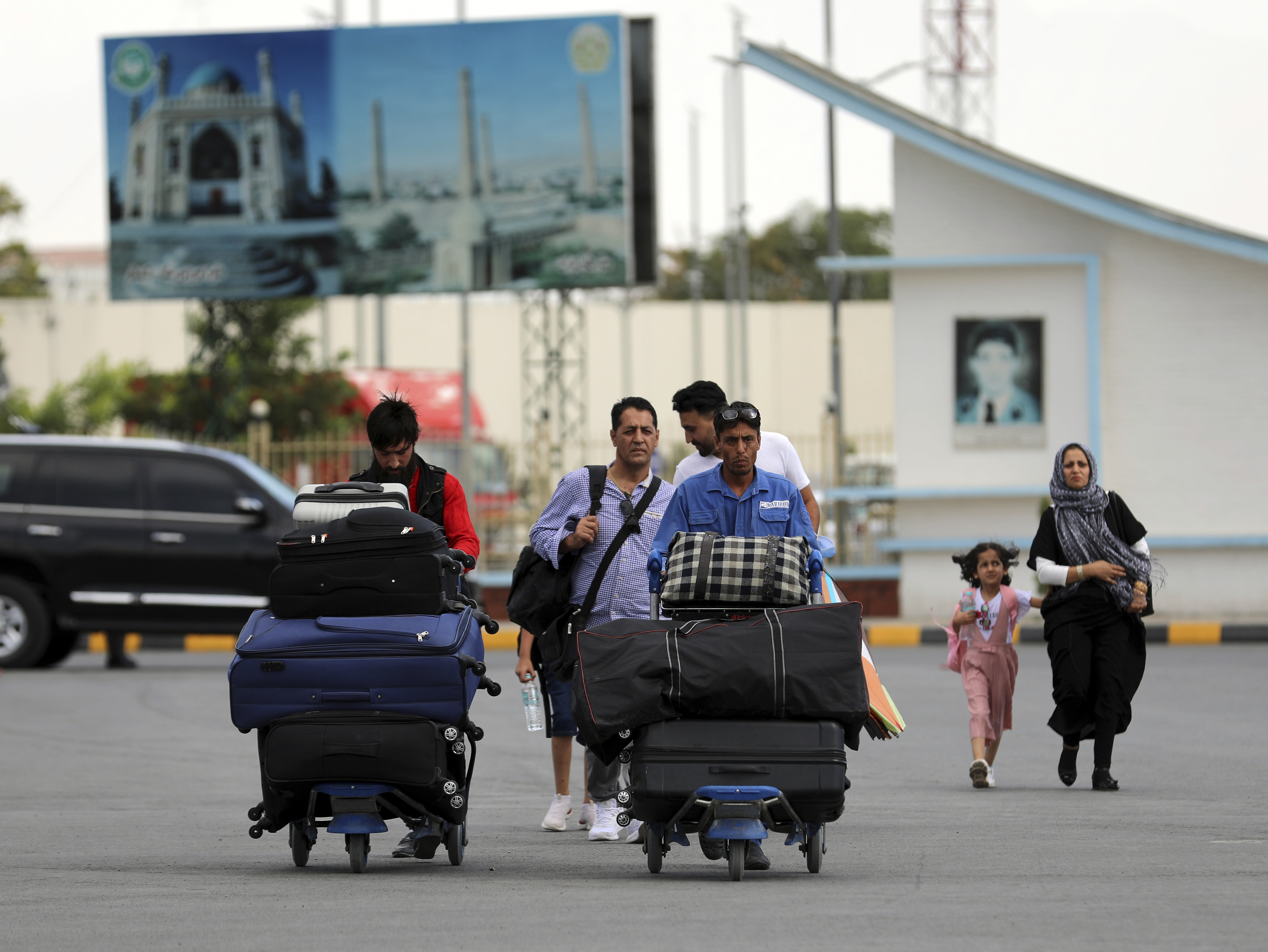 The Taliban seize Jalalabad, the last major city besides the capital, and a string of victories follows.

The capitals of Maidan Wardak, Khost, Kapisa and Parwan provinces, as well as the country's last government-held border post falls to militants, and Afghan forces at Bagram Air Base, home to a prison housing 5000 inmates, surrender.

Insurgents had no air force and just days earlier had no major city. They were far outnumbered by Afghan troops, who were trained by the American military, the most well-funded and strongest on the planet. And yet, the impossible is now true: The capital of Kabul and its five million residents is theirs.

Helicopters whirr. Smoke rises. The American flag is lowered at the embassy. 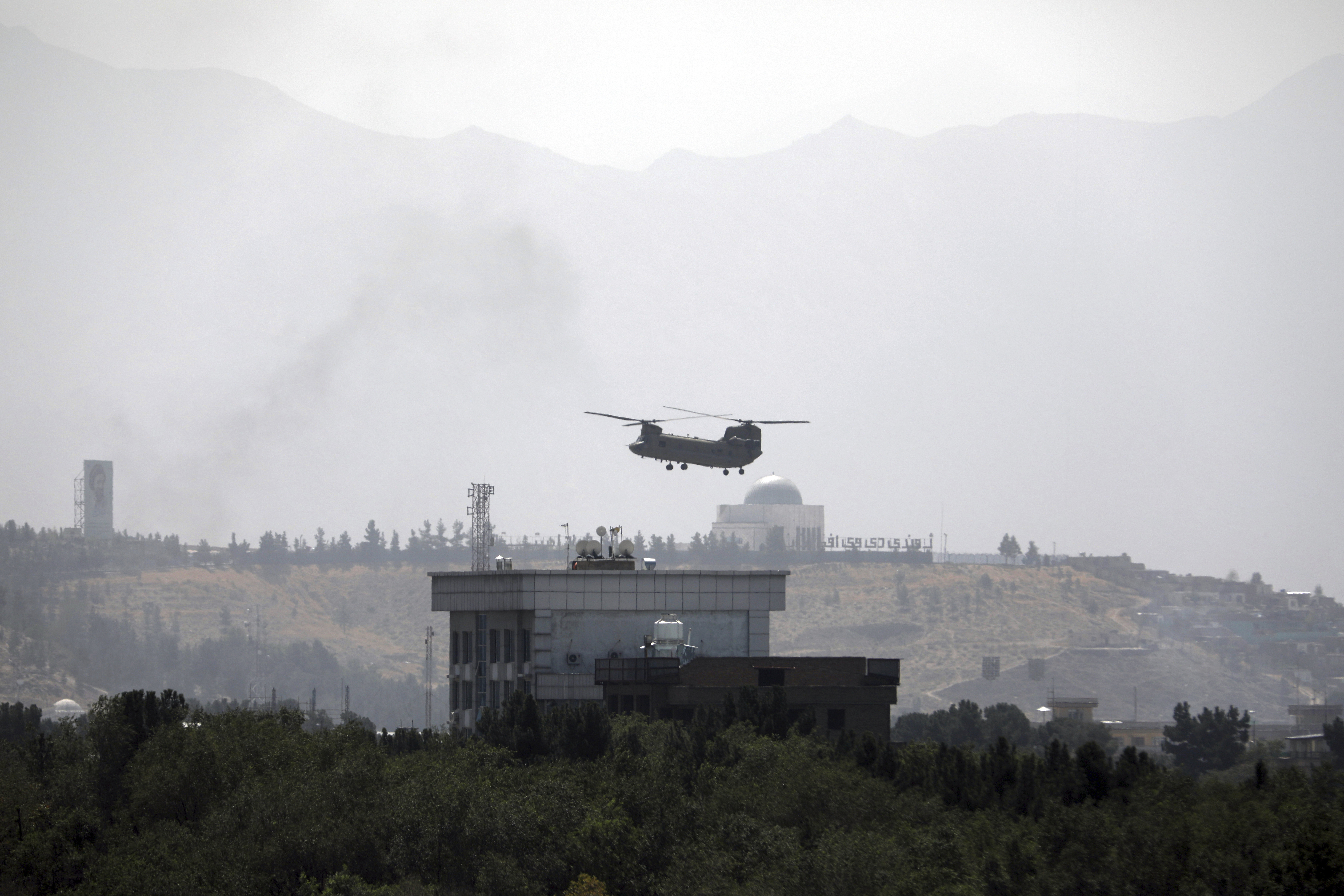 Mr Ghani, who hours earlier urged his people not to give up, has now fled himself, his abandoned palace occupied by heavily armed fighters, his name cursed by his own countrymen.

"They tied our hands from behind and sold the country," says Defence Minister Bismillah Khan Mohammadi.

In the US, Mr Biden's CIA director cuts short a foreign trip to return to Washington. Others in the administration reject comparisons to the fall of Saigon even as many find the resemblance impossible to ignore.

With preparations underway to commemorate the 20th anniversary of the 9/11 attacks that drove the US to war, the top American general warns of a rise in terrorist threats to come.

Whiplash over the sheer speed of Afghanistan's fall jars those in seats of power.

"You want to believe that trillions of dollars and 20 years of investment adds up to something," says Senator Chris Murphy, a Biden ally and member of the Senate Foreign Relations Committee.

Night falls with Taliban fighters deployed across the capital. Abandoned police posts are claimed. And on nearly empty streets, men carry the black-and-white flag of the Taliban.

Their victory is complete.