A man who claimed to have a bomb in a utility near the US Capitol has surrendered to law enforcement officers after an hours-long standoff that prompted a massive police response and the evacuations of government buildings and businesses in the area.

Police did not immediately know whether there were explosives in the vehicle.

Authorities were searching the ute in an effort to understand what led the man, identified by law enforcement officials as 49-year-old Floyd Ray Roseberry of North Carolina, to drive onto the sidewalk outside the Library of Congress and make bomb threats to officers. 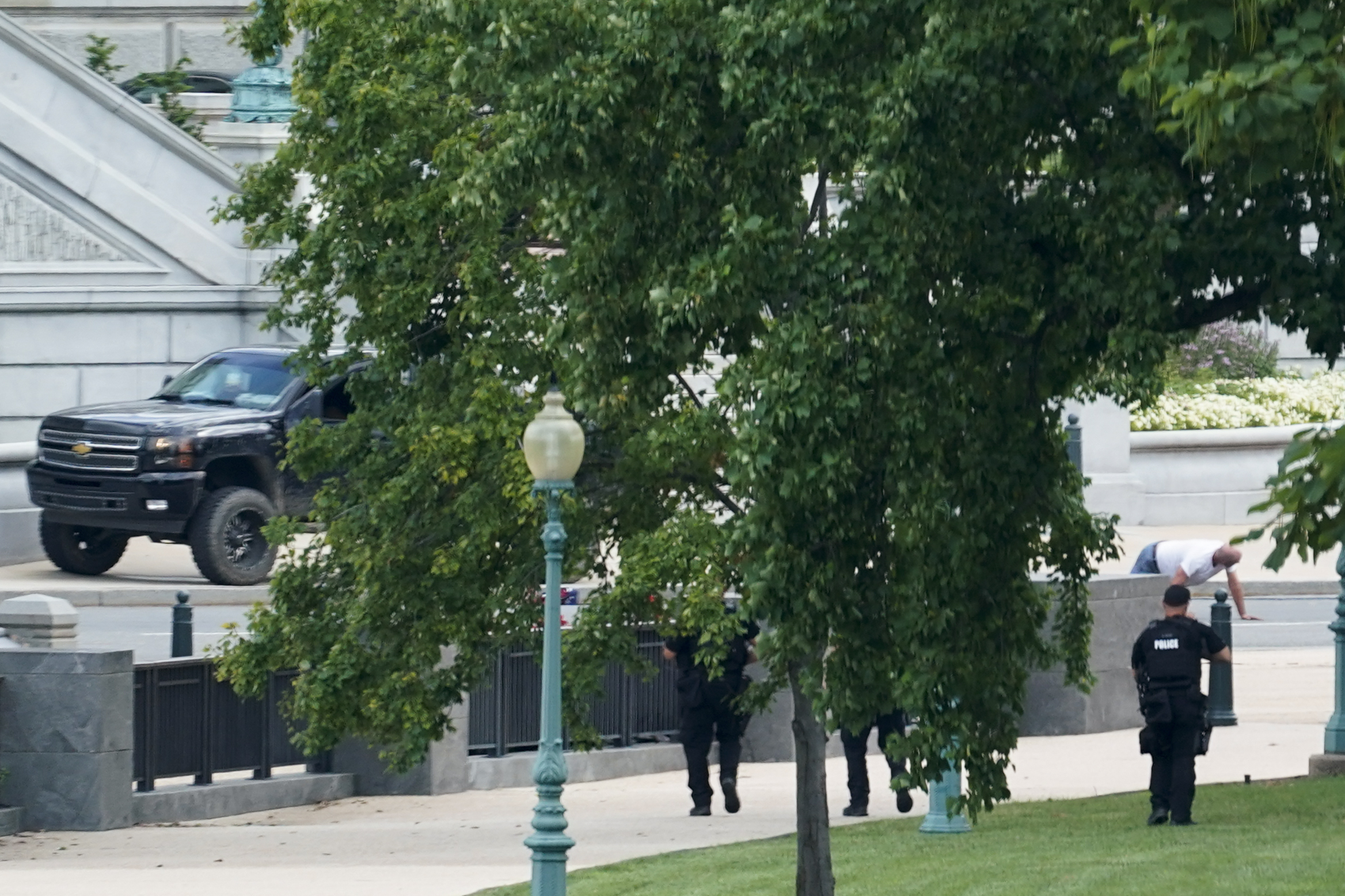 The standoff was resolved peacefully after roughly five hours of negotiations, ending when Mr Roseberry crawled out of the ute and was taken into law enforcement custody.

But the incident brought the area surrounding the Capitol to a virtual standstill as police emptied buildings and cordoned off streets as a precaution.

Congress is in recess this week, but staffers were seen calmly walking out of the area at the direction of authorities.

The episode unfolded during a tense period in Washington, coming eight months after the insurrection at the US Capitol and and one month before a planned rally in Washington that law enforcement officials have been preparing for.

The incident began about 9.15am on Thursday (11.15pm AEST) when a truck with no licence plate drove up the sidewalk outside the library.

The driver told the responding officer that he had a bomb, and was holding what the officer believed to be a detonator. The ute had no licence plates.

READ MORE: Around 35 unaccounted for in North Carolina cyclone Police negotiators spent hours communicating with Mr Roseberry as he wrote notes and showed them to authorities from inside the ute, according to the two people and a third person also briefed on the matter, all of whom spoke on condition of anonymity because they were not authorised to publicly discuss the matter.

"My negotiators are hard at work trying to have a peaceful resolution to this incident," US Capitol Police Chief J. Thomas Manger said earlier in the day.

"We're trying to get as much information as we can to find a way to peacefully resolve this." While police continued negotiations, video surfaced of Roseberry on Facebook Live inside the ute, which was stuffed with coins and boxes.

He was threatening explosions, making anti-government threats and talking about what he believes are the ills of the country, including the US position on Afghanistan, health care and the military.

He said Democrats needed to step down, then also said he loved the president, Democrat Joe Biden.

Facebook removed the videos a few hours after they were apparently filmed. Mr Roseberry did not appear to have a specific demand for law enforcement other than to speak with Mr Biden.

Videos posted to his Facebook before the page was taken down appear to show Mr Roseberry at the November 14 rally attended by thousands of Trump supporters to protest what they claimed was a stolen election.

One video appears to be filmed by Mr Roseberry as he's marching with a crowd of hundreds of people carrying American flags and Trump flags and shouting "stop the steal." 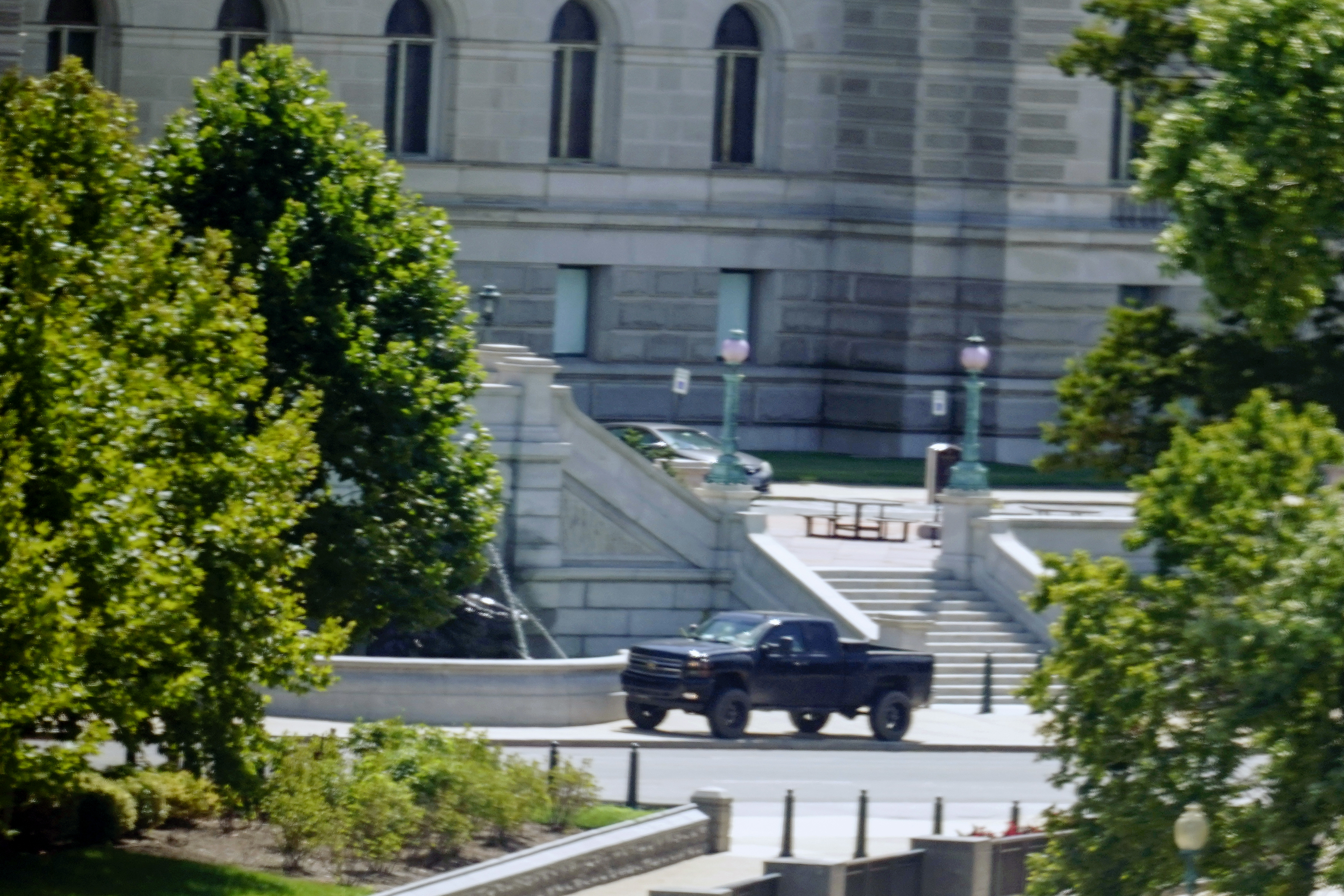 Mr Roseberry's ex-wife, Crystal Roseberry, said she had seen images of the man in the standoff at the Capitol and confirmed to The Associated Press that it was her ex-husband.

She said had never known him to have explosives but that he was an avid collector of firearms.

The nation's capital has been tense since the January 6 insurrection at the Capitol by supporters of then-President Donald Trump.

Fencing that had been installed around the Capitol grounds had been up for months but was taken down this summer.

No one has been arrested yet for placing the bombs.

The RNC, not far away from where the ute was parked Thursday, was also evacuated over the threat. Officials are also jittery over a planned rally in September in DC.