Snorkellers on the Great Barrier Reef have discovered a huge coral more than 400-years-old which is thought to have survived 80 major cyclones, numerous coral bleaching events and centuries of exposure to other threats.

The Conversation describe the discovery in research published today.

Their team surveyed the hemispherical structure, which comprises small marine animals and calcium carbonate, and found it's the Great Barrier Reef's widest coral, and one of the oldest. 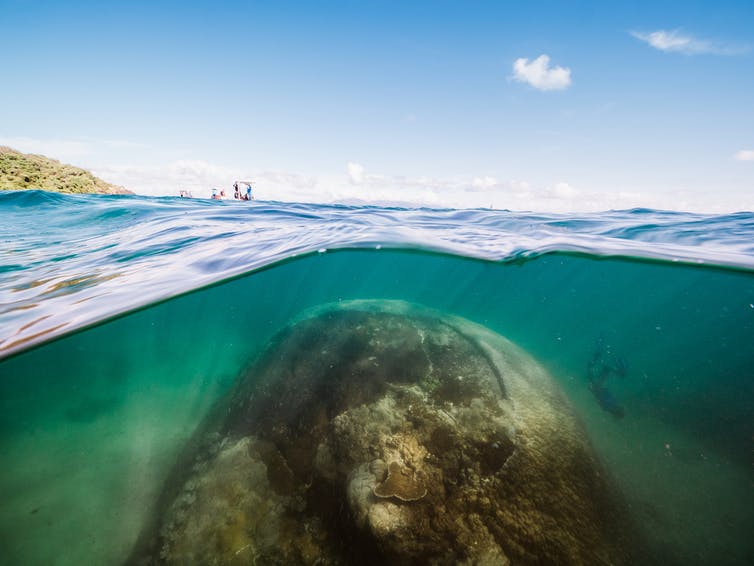 It was discovered off the coast of Goolboodi (Orpheus Island), part of Queensland's Palm Island Group. Traditional custodians of the region, the Manbarra people, have called the structure Muga dhambi, meaning "big coral".

For now, Muga dhambi is in relatively good health. But climate change, declining water quality and other threats are taking a toll on the Great Barrier Reef. Scientists, Traditional Owners and others must keep a close eye on this remarkable, resilient structure to ensure it is preserved for future generations. 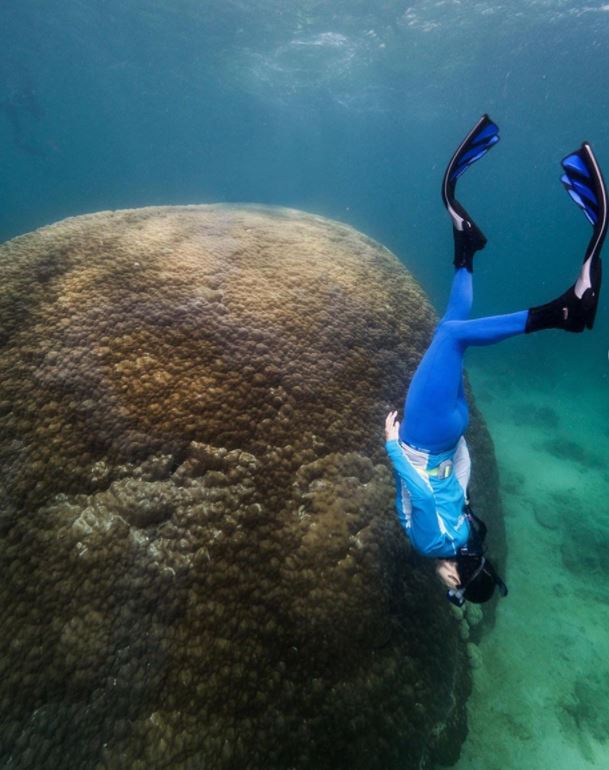 Muga dhambi is located in a relatively remote, rarely visited and highly protected marine area. It was found during citizen science research in March this year, on a reef slope not far from shore.

A literature review was conducted with scientists consulting other experts to compare the size, age and health of the structure with others in the Great Barrier Reef and internationally.

We measured the structure at 5.3 metres tall and 10.4 metres wide. This makes it 2.4 metres wider than the widest Great Barrier Reef coral previously measured by scientists.

Muga dhambi is of the coral genus Porites and is one of a large group of corals known as "massive Porites". It's brown to cream in colour and made of small, stony polyps.

These polyps secrete layers of calcium carbonate beneath their bodies as they grow, forming the foundations upon which reefs are built.

Muga dhambi's height suggests it is aged between 421 and 438-years-old – far pre-dating European exploration and settlement of Australia. This calculation was made based on rock coral growth rates and annual sea surface temperatures.

Other comparatively large massive Porites have previously been found throughout the Pacific. One exceptionally large colony in American Samoa measured 17m × 12m. Large Porites have also been found near Taiwan and Japan. 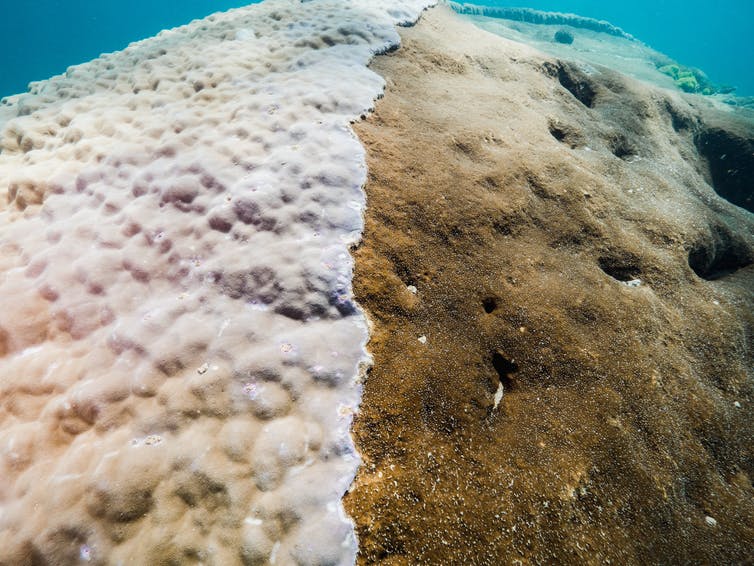 Resilient, but under threat

The Conversation reviewed environmental events over the past 450 years and found Muga dhambi is unusually resilient. It has survived up to 80 major cyclones, numerous coral bleaching events and centuries of exposure to invasive species, low tides and human activity.

About 70 per cent of Muga dhambi consisted of live coral, but the remaining 30 per cent was dead. This section, at the top of the structure, was covered with green boring sponge, turf algae and green algae.

Coral tissue can die from exposure to sun at low tides or warm water. Dead coral can be quickly colonised by opportunistic, fast growing organisms, as is the case with Muga dhambi.

Green boring sponge invades and excavates corals. The sponge's advances will likely continue to compromise the structure's size and health.

We found marine debris at the base of Muga dhambi, comprising rope and three concrete blocks. Such debris is a threat to the marine environment and species such as corals.

We found no evidence of disease or coral bleaching. 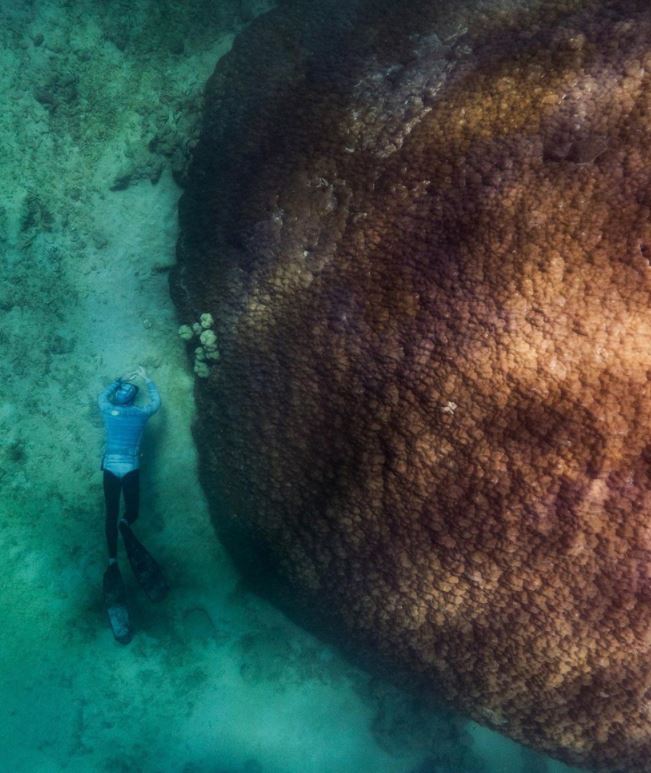 'Old man' of the sea

A Traditional Owner from outside the region took part in citizen science training which included surveys of corals, invertebrates and fish. The Conversation also consulted the Manbarra Traditional Owners about and an appropriate cultural name for the structure. 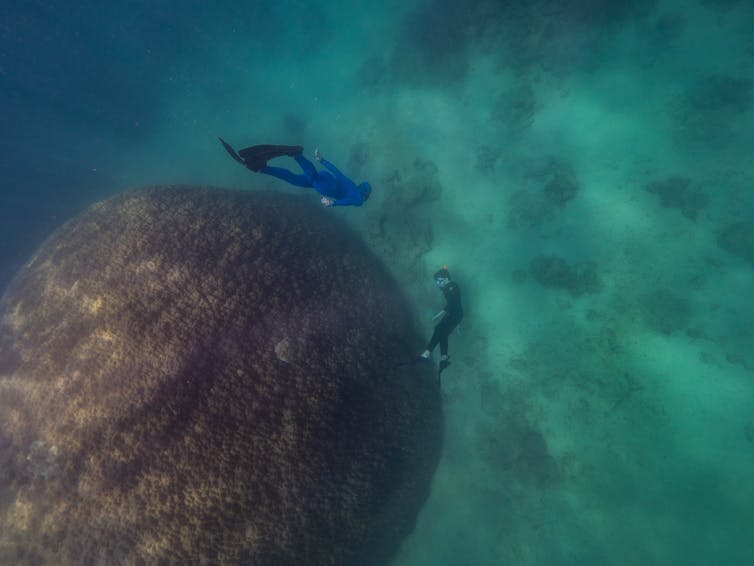 A wonder for all generations

No database exists for significant corals in Australia or globally. Cataloguing the location of massive and long-lived corals can be benefits.

For example from a scientific perspective, it can allow analyses which can help understand century-scale changes in ocean events and can be used to verify climate models. Social and economic benefits can include diving tourism and citizen science, as well as engaging with Indigenous culture and stewardship.

However, cataloguing the location of massive corals could lead to them being damaged by anchoring, research and pollution from visiting boats.

Looking to the future, there is real concern for all corals in the Great Barrier Reef due to threats such as climate change, declining water quality, overfishing and coastal development. We recommend monitoring of Muga dhambi in case restoration is needed in future.

We hope our research will mean current and future generations care for this wonder of nature, and respect the connections of Manbarra Traditional Owners to their Sea Country.

This article originally appeared in The Conversation and was co-written by Adam Smith, Nathan Cook and Vicki Saylor and has been republished with permission.