More than 42,000 Californians have been forced to flee their homes as nine large wildfires continue to burn out of control in the northern part of the state, prompting Governor Gavin Newsom to request a major disaster declaration from President Biden.

The Caldor Fire, which has scorched more than 43,000 hectares, is the top firefighting priority in the nation, according to Chief Thom Porter of the California Department of Forestry and Fire Prevention (Cal Fire).

Officials fear the fire, which is just five per cent contained, may push its way into the populated Lake Tahoe Basin, and they warned all Californians to be ready to evacuate. "I personally don't believe the fire is going to get into the basin proper," Chief Porter said of Lake Tahoe. "But I could be born wrong by that. The weather has outstripped and Mother Nature has taken over and taken fires like the Dixie to places that I never thought possible."

Thick smoke from the raging wildfire turned the sky over Lake Tahoe an ominous orange yesterday, with the Environmental Protection Agency reporting hazardous air quality in the region.

The Dixie Fire – the second-largest fire in state history — which has been burning for more than a month, has grown so large that its perimeer stretches more than 800 square kilometres. That blaze has swelled to more than 293,400 hectares and is now 40 per cent contained.

Two other large fires, the Walker Fire and the French Fire, are still growing, and each inferno has its own specific needs, said Chief Porter, who is helping coordinate the massive effort to deploy resources, including firefighters, aircraft, and equipment to each area as appropriate.

"We're also working to make sure that we're resetting and getting our own people home and rested so we can sustain this fight. This is a marathon," said Chief Porter, noting that late August is about the middle point of the season for large and damaging fires that are expected to burn into the deep fall.

If granted, the presidential declaration would help provide help with housing, unemployment, counseling, and medical and legal services. Public assistance for repairs and replacement of schools, roads, utilities also would be included.

Several counties have already been declared states of emergency. "These temporary closures are necessary to ensure public and firefighter safety, as well as reduce the potential for new fire starts," regional forester Jennifer Eberlien said.

Additionally, the Eldorado National Forest, also in California, was closed on August 17 due to the Caldor Fire. That closure will last through at least September 30, the agency said.

The emergency closures in California come as 93 large active fires and complexes have burned over one million hectares across 13 states, according to the National Interagency Fire Center (NIFC). 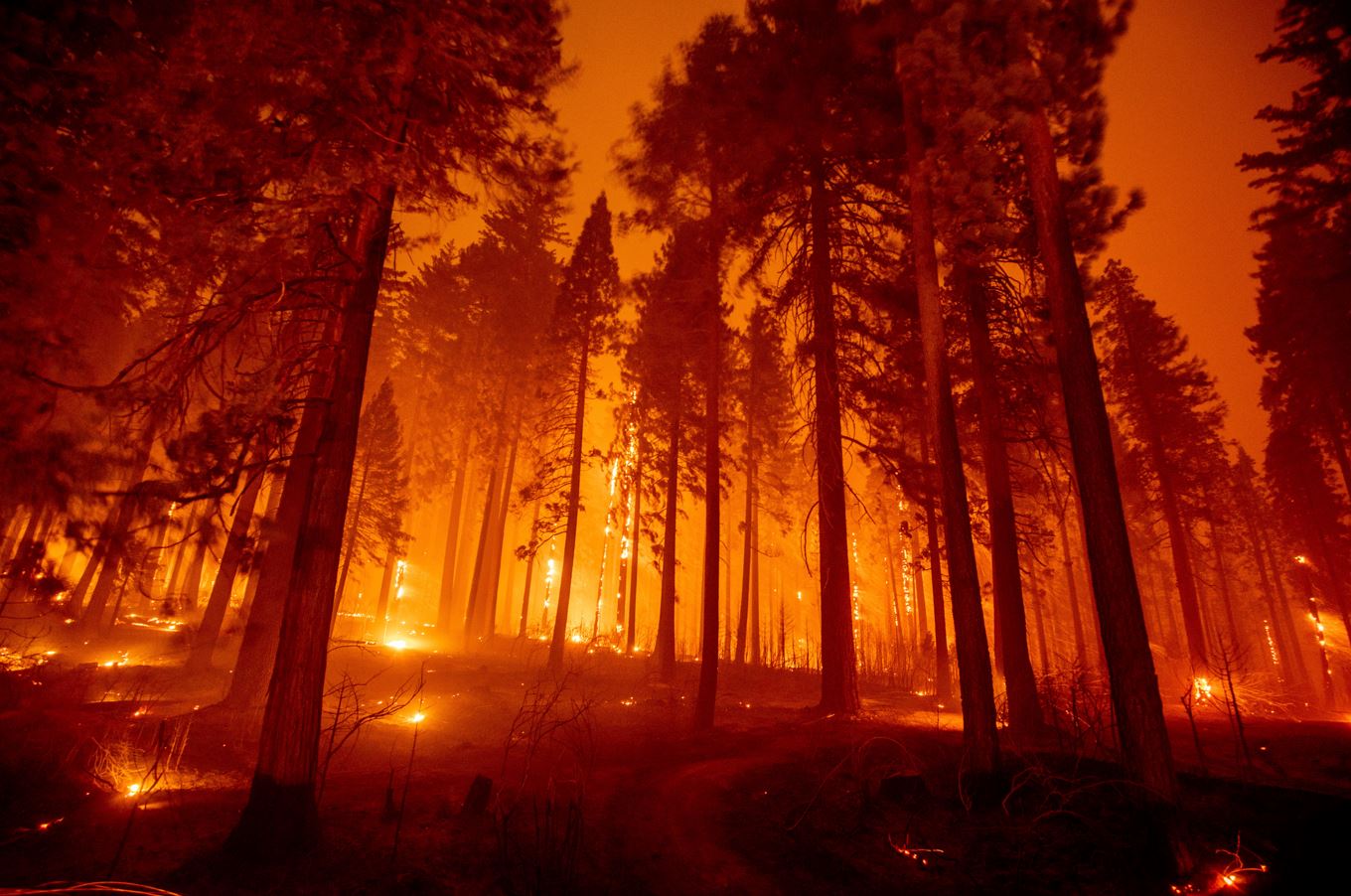 So far this year, more than 41,000 fires have scorched 0ver 1.8 million hectares, NIFC data showed. That's almost half a million hectares higher than the nearly 133,546 hectares burned by this time last year.

Some very minor relief is in the forecast as an onshore flow into the Northwest has helped calm fire conditions and clear lingering smoke, CNN meteorologist Michael Guy said.

Winds along the frontal boundary of a cold front moving into the area could push some big fires into new acreage, but the next week will see cooler temperatures and higher humidity, which should increase containment, Mr Guy said.

While there's no significant rain to speak of, the drought monitor in the West shows "miniscule" signs of improvement," Mr Guy said. "A little is better than none or worse. So the little bit of rain that was received did put a hair scratch (not a dent) in the West's drought." 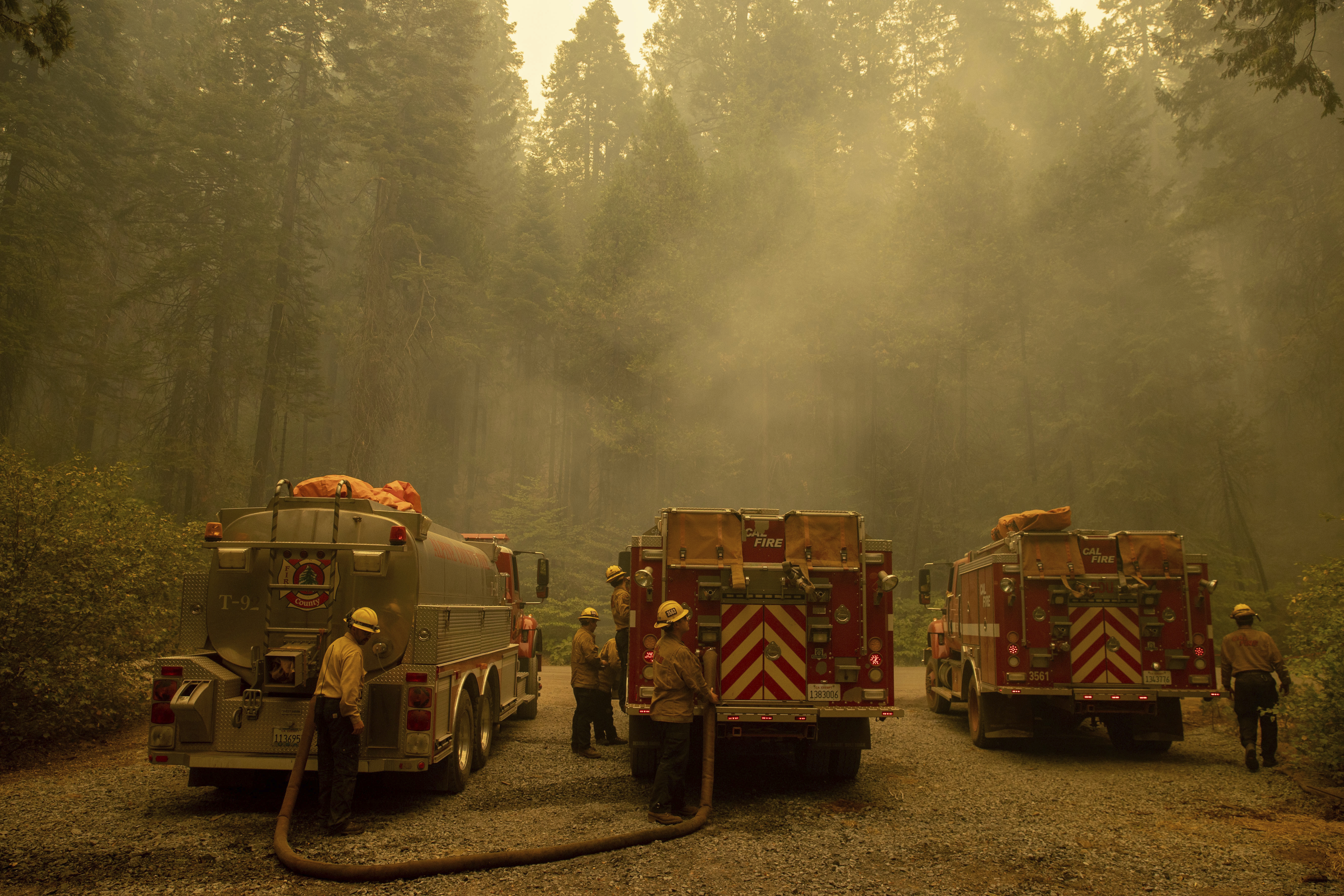 The Caldor Fire destroyed 557 structures as of yesterday and threatened another 17,488, fire officials said. More than 1,600 firefighters are assigned to it.

Parts of El Dorado County are under evacuation orders or warnings. An evacuation warning is also in place in parts of neighboring Amador County.

"This year what we're seeing more than ever is a set of fuel conditions that many of our professionals that have spent their whole careers fighting fire have never seen before," El Dorado National Forest Supervisor Jeff Marsolais said in a community briefing Saturday evening.

"The system is as taxed as it has ever been," he said of firefighting resources. "And our folks on the ground are doing everything they can within their power."

The Caldor Fire was also cited as the reason two police officers from Galt, California, a small city south of Sacramento, were critically injured in a head-on collision while responding to the fire for traffic management, California's Office of Emergency Services Director Mark Ghilarducci said.

Investigators don't yet know what caused the fire to start.

The Dixie Fire, the nation's largest active fire, has destroyed more than 1,200 structures and threaten another 12,000. 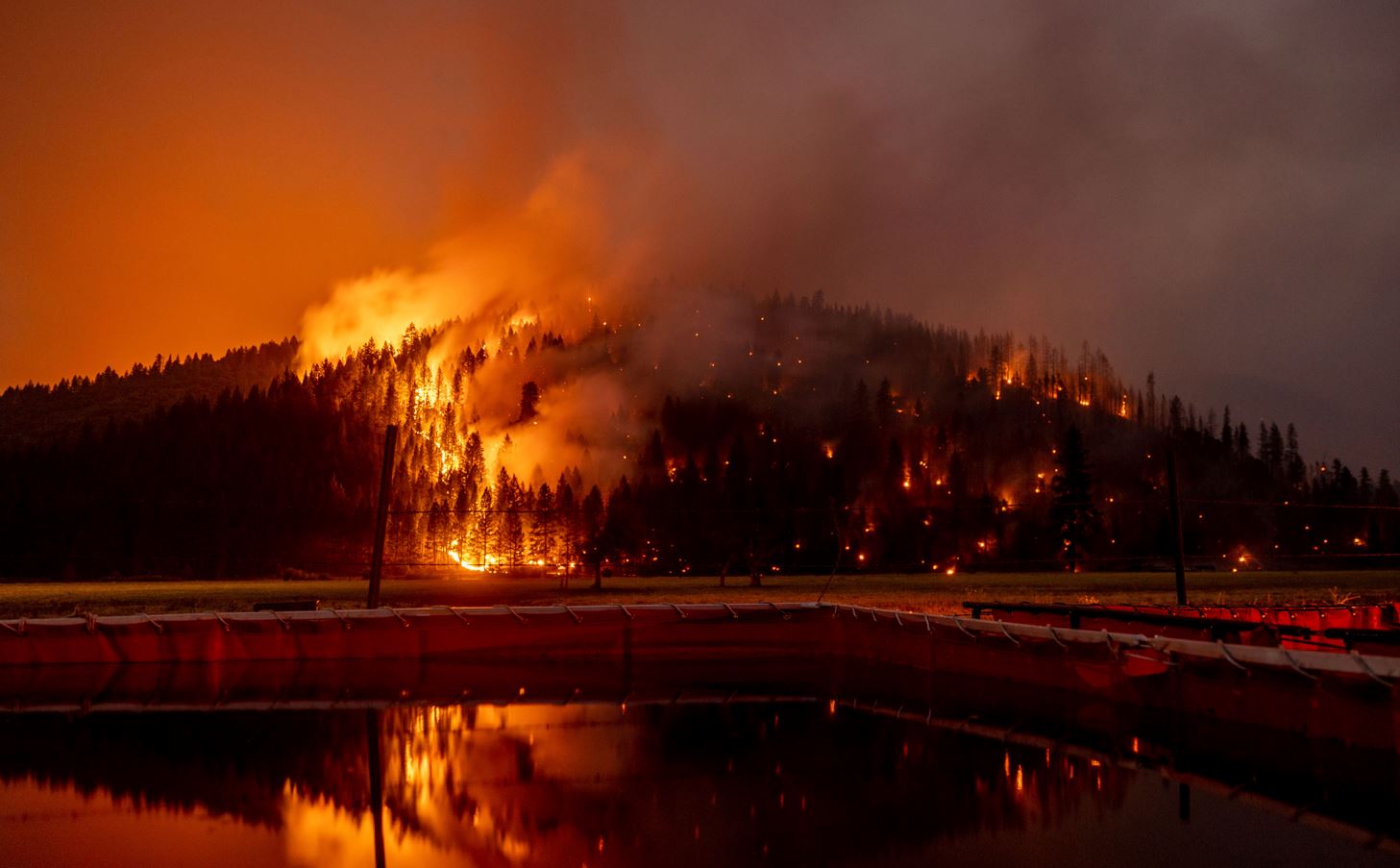 Evacuation warnings are in place in portions of Plumas, Butte and Lassen counties, according to Cal Fire. In Tehama County, evacuation orders were downgraded yesterday to warnings and warnings in three areas were lifted.

"Fire remained active until after midnight. Smoke settled back over the fire in the early morning hours, reducing fire activity," Cal Fire said in yesterday's update on the fire.

"Cooler weather and increasing humidity slowed rates of spread, with isolated torching still observed. Smoke settled back over the fire in the early morning hours. A much quieter weather patterns is shaping up for most of this week," the update said.