Researchers have captured the moment when a livelong vegetarian broke rank to eat meat – and what made it all the more "horrifying" was that it was a tortoise.

Scientists captured the moment on video when a Seychelles giant tortoise – previously thought to be vegetarian – attacked and ate a tern chick in what they say is the first documentation of deliberate hunting in any wild tortoise species.

"This is completely unexpected behaviour and has never been seen before in wild tortoises," Justin Gerlach, director of studies at Peterhouse, Cambridge and affiliated researcher at the University of Cambridge's Museum of Zoology, said in a statement this week. 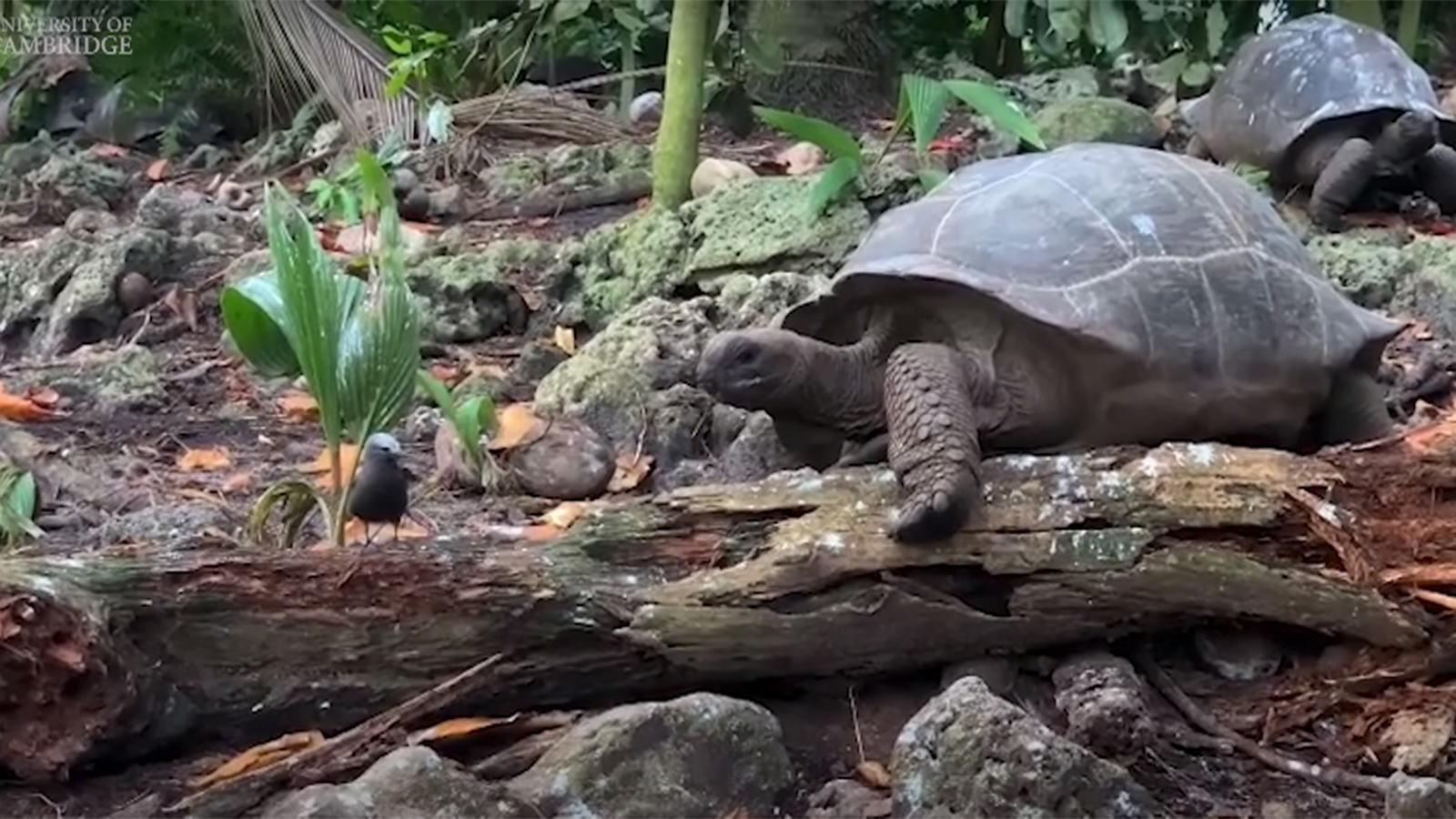 "The giant tortoise pursued the tern chick along a log, finally killing the chick and eating it," Dr Gerlach, who led the study, published Monday in the journal Current Biology, said.

"It was a very slow encounter, with the tortoise moving at its normal, slow walking pace – the whole interaction took seven minutes and was quite horrifying."

Anna Zora, conservation manager on Frégate Island and co-author of the study, captured the ordeal, which took place in July 2020.

"When I saw the tortoise moving in a strange way I sat and watched, and when I realised what it was doing I started filming," she said in the statement. 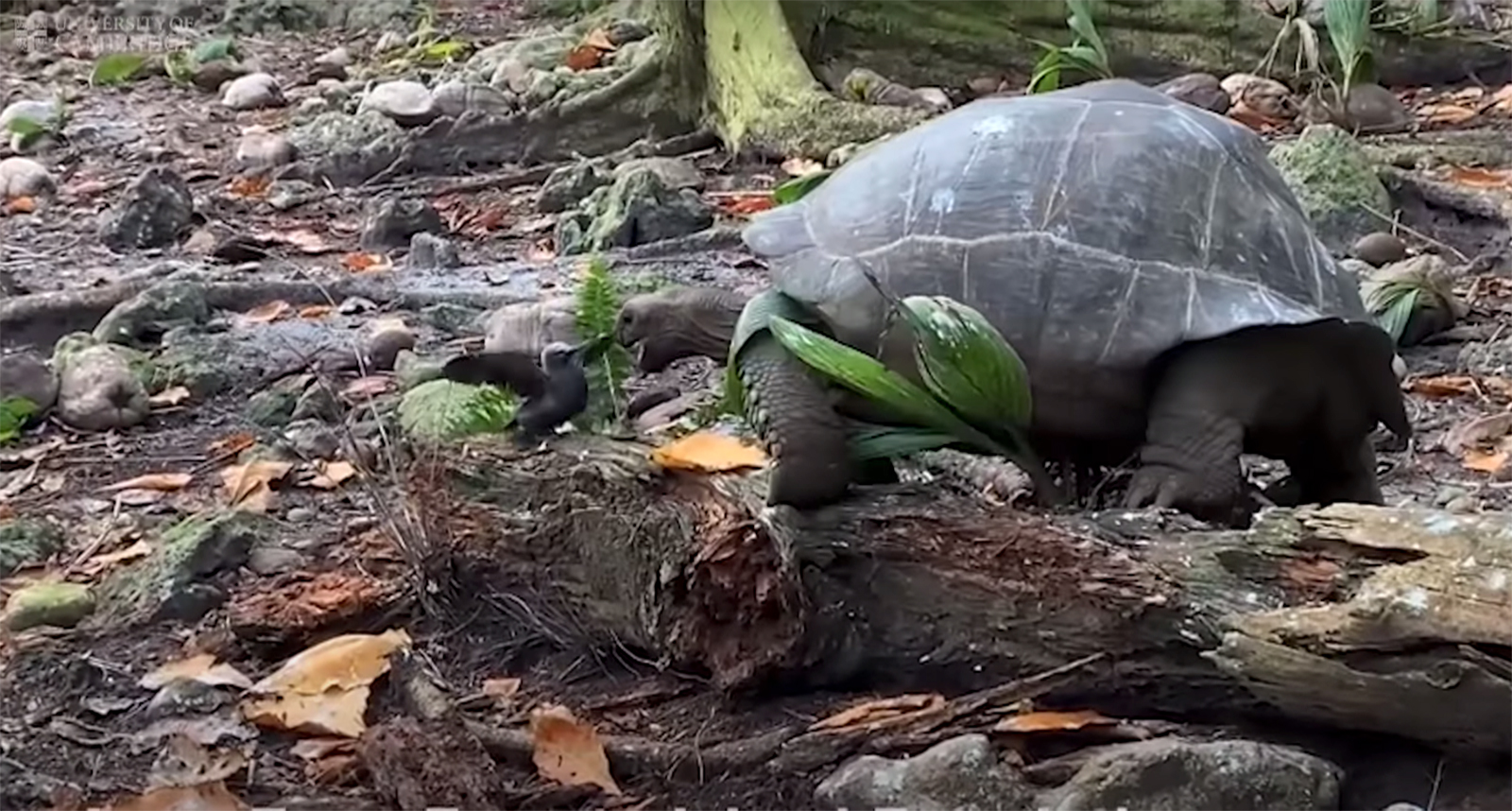 Dr Gerlach told CNN that the way the tortoise moved towards the chick suggested it was "experienced."

"It's moving very deliberately – it's not just wandering about, it's looking at this tern, and it's walking straight at it, clearly intending to do something. That suggests to me that it's doing it with intent. It knows what it's doing, it's done this before," he said.

Though tortoises are thought to be vegetarian, they have been spotted "opportunistically" eating carrion, as well as bones and snail shells for calcium.

READ MORE: Plover chick cuddled with duckling before being reunited with mother

"It's quite common for herbivores to eat a bit of dead animal as a free protein source, essentially. But this is the first video evidence of them deliberately killing in order to eat," Dr Gerlach said.

Still, the team can't say for certain how common such behaviour is among the tortoises, and plan to study them further.

Giant tortoises are the largest herbivores on the Galapagos and Seychelles islands, and eat up to 11 percent of the vegetation, researchers said.

Experts said that the new hunting behaviour was caused by the "unusual" combination of a tree-nesting tern colony and a resident giant tortoise population on the Seychelles' Frégate island, which is home to around 3000 tortoises.

"It's probably not uncommon for animals to surprise our expectations by eating unexpected things that may just be a one-off," Dr Gerlach explained.

"We should try and avoid having too many assumptions about what animals are going to do, or what they are doing. And it really shows the value of observation. Just by watching and recording what animals are doing you can find really totally unexpected things, things that we couldn't discover deliberately – it has to be by chance."