One of America's largest Confederate monuments came down on Wednesday when workers removed a figure of Genera Robert E. Lee that towered over Virginia’s capital city for more than a century.

The statute had become a target for protesters seeking to abolish symbols of racism.

A crowd of onlookers erupted in cheers and sang as the massive figure was lowered to the ground. 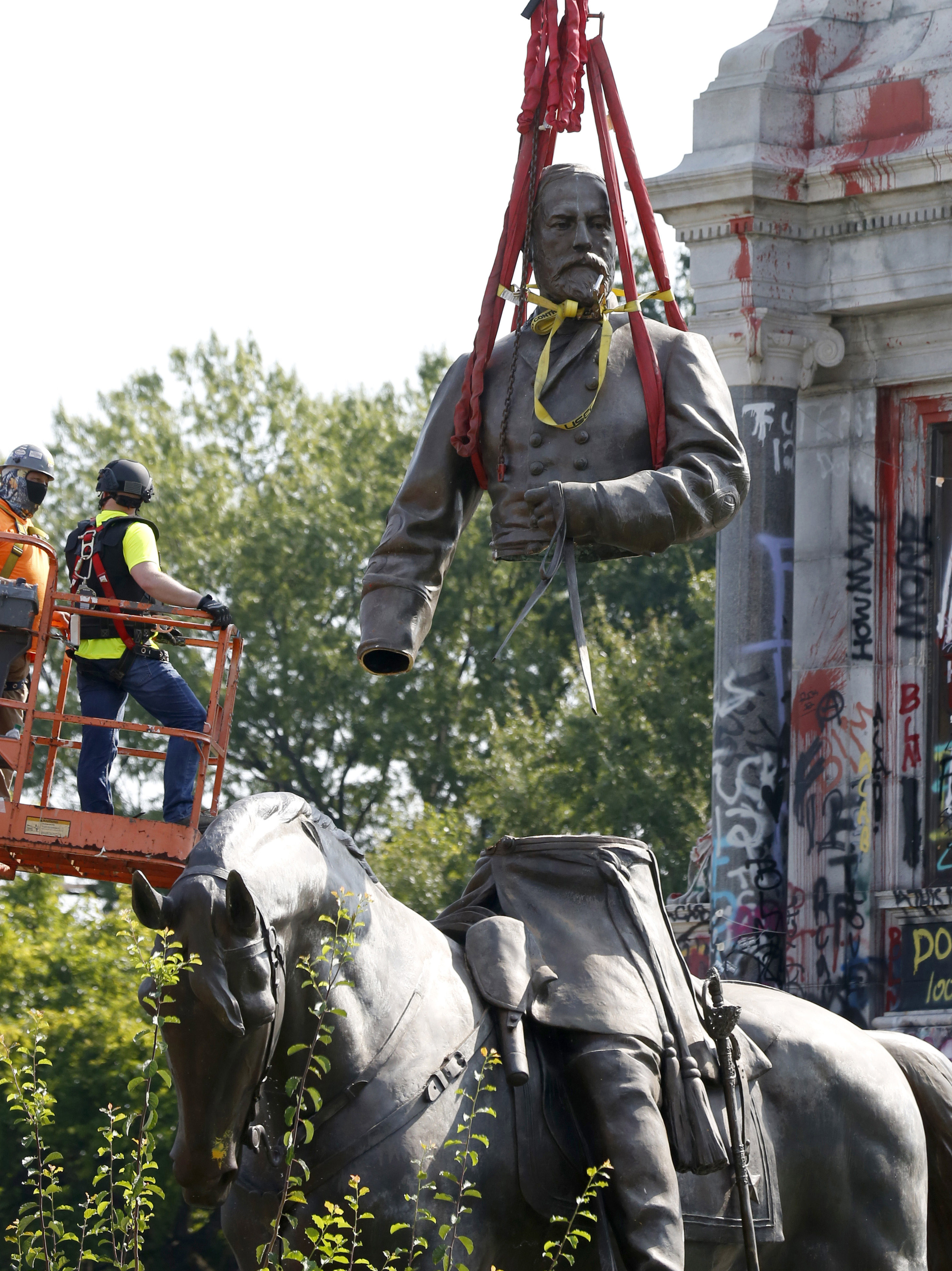 A construction worker who strapped harnesses around Lee and his horse lifted his arms in the air and counted, “Three, two, one,” to jubilant shouts from hundreds of people.

A work crew then began cutting it into pieces.

“Any remnant like this that glorifies the lost cause of the Civil War, it needs to come down," said Governor Ralph Northam.

He said it was "hopefully a new day, a new era in Virginia" and added the statue represented “more than 400 years of history that we should not be proud of.” 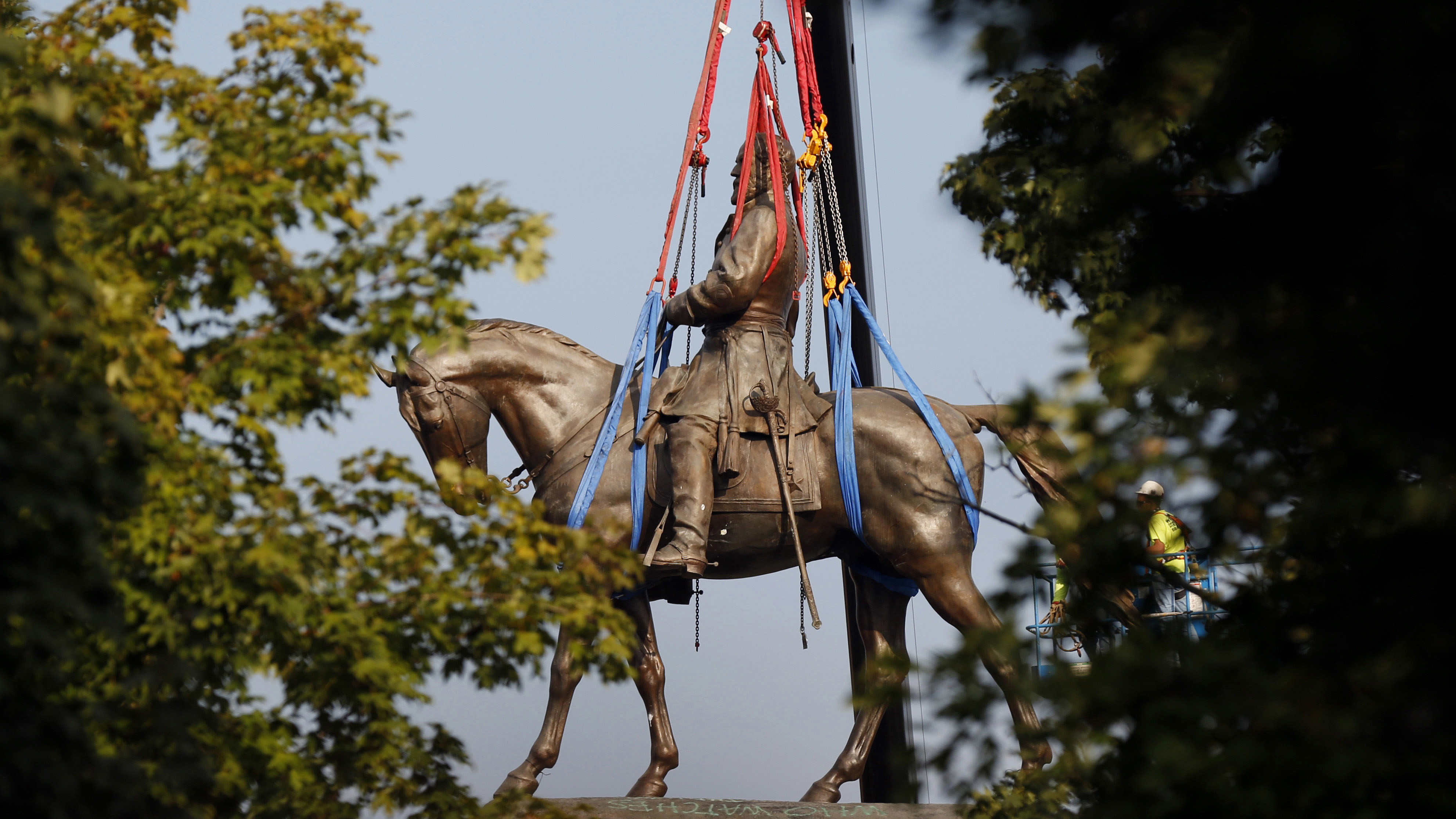 Sharon Jennings, an African American woman born and raised in Richmond, said she had mixed feelings seeing it go.

“It doesn’t matter what colour you are, if you really like history, and you understand what this street has been your whole life and you’ve grown up this way, you’re thinking, ‘Oh, my God.’ But when you get older, you understand that it does need to come down.” 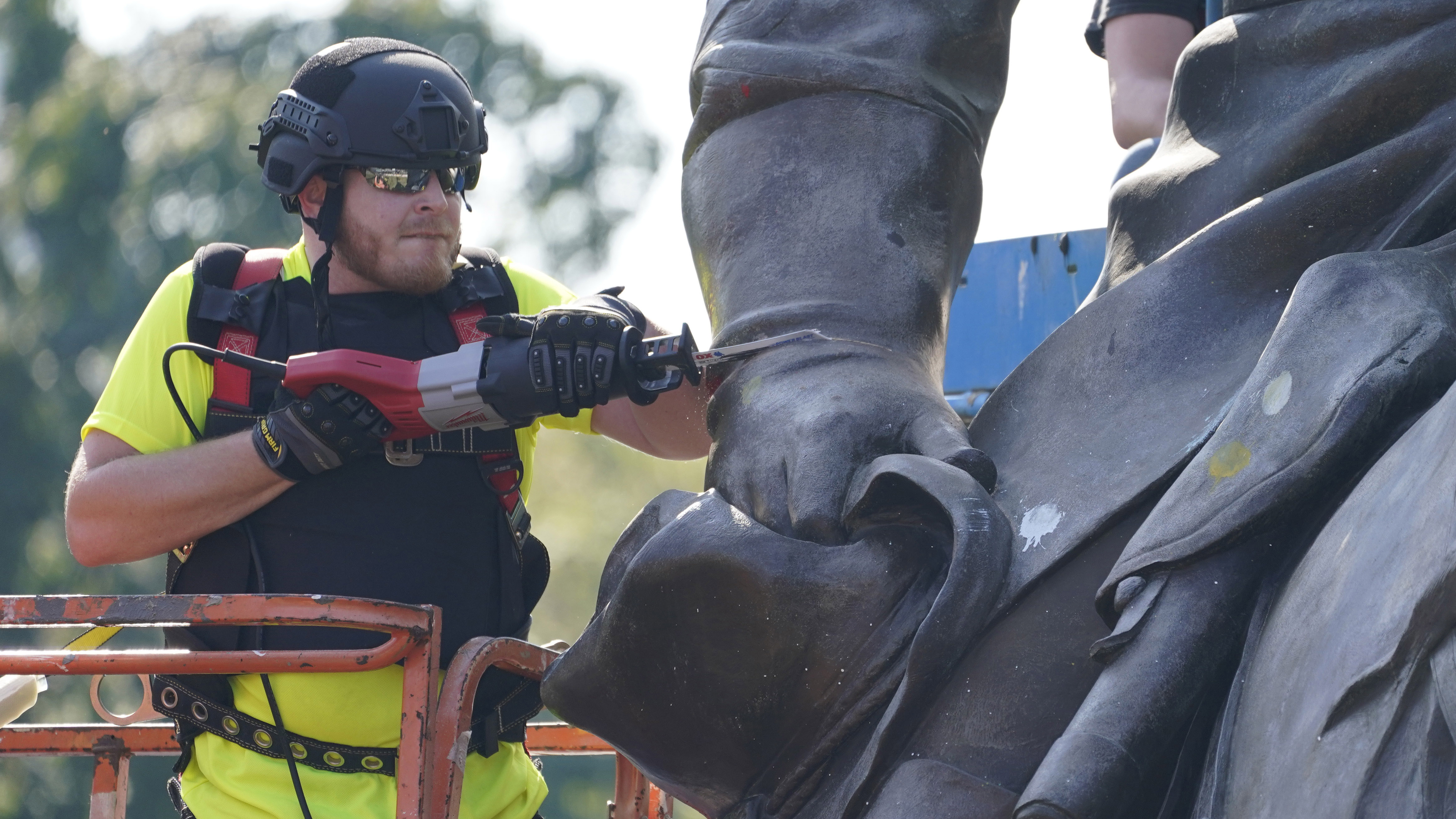 Some people chanted “Whose streets? Our streets!" and sang, “Hey, hey, hey, goodbye.”

One man with a Black Lives Matter flag was escorted out by police after running into the fenced-off work area. No arrests were reported, and there was no sign of a counter protest.

Workers used a power saw to cut the statue in two along the general's waist, so that it could be hauled under highway overpasses to an undisclosed state-owned facility until a decision was made about its future. 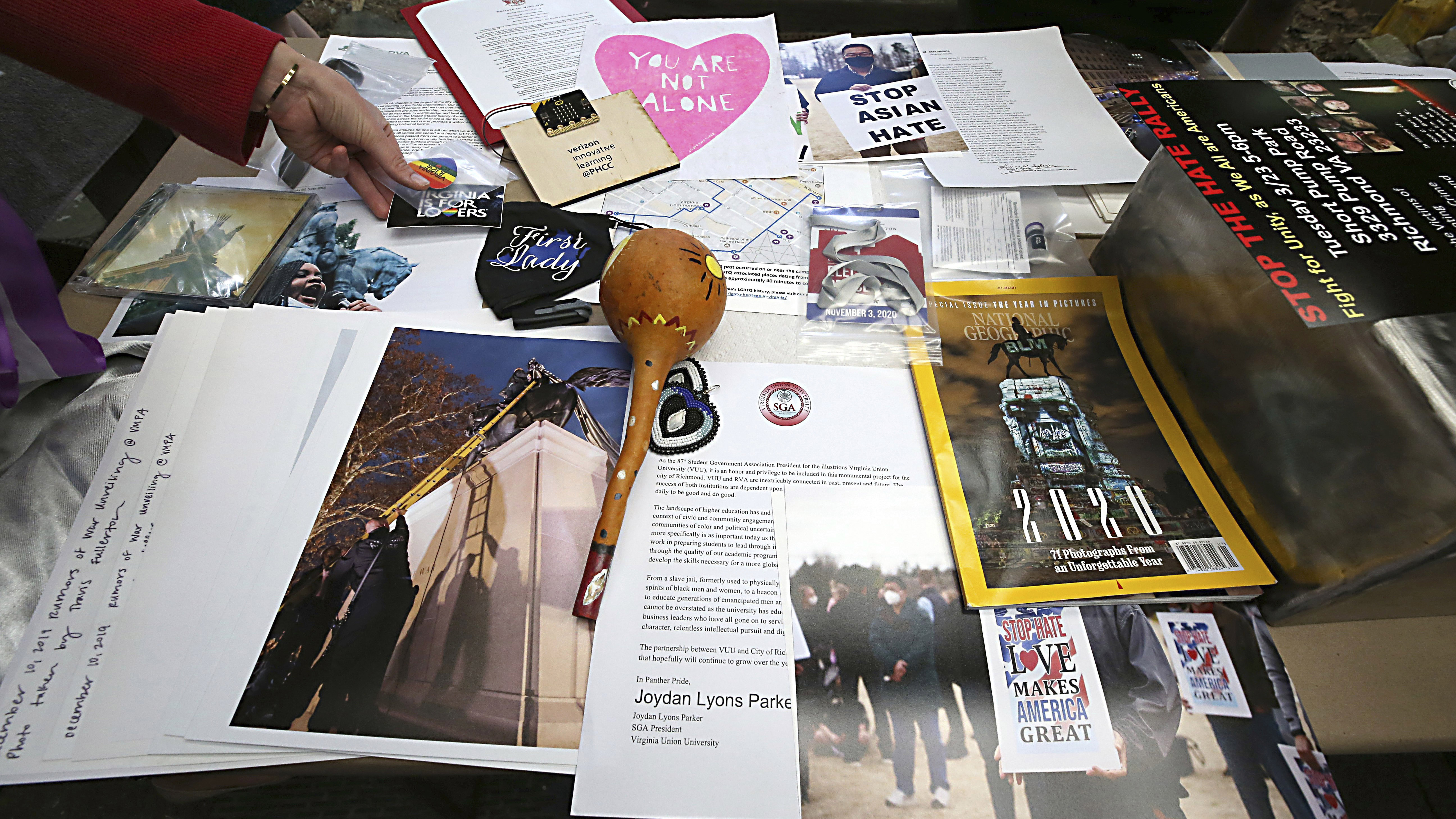 The job was overseen by Team Henry Enterprises, led by Devon Henry, a Black executive who faced death threats after his company's role in removing Richmond's other Confederate statues was made public last year.

He said the Lee statue posed their most complex challenge.

“It won’t transport in this height, so we need to lift the rider off the horse and transport it that way. From a thickness standpoint, we don’t know how long it will take. Are there iron supports? It’s a total mystery."

By mid-afternoon, the pieces were gone. They were hauled away on a flatbed truck to cheers from the remaining crowd. 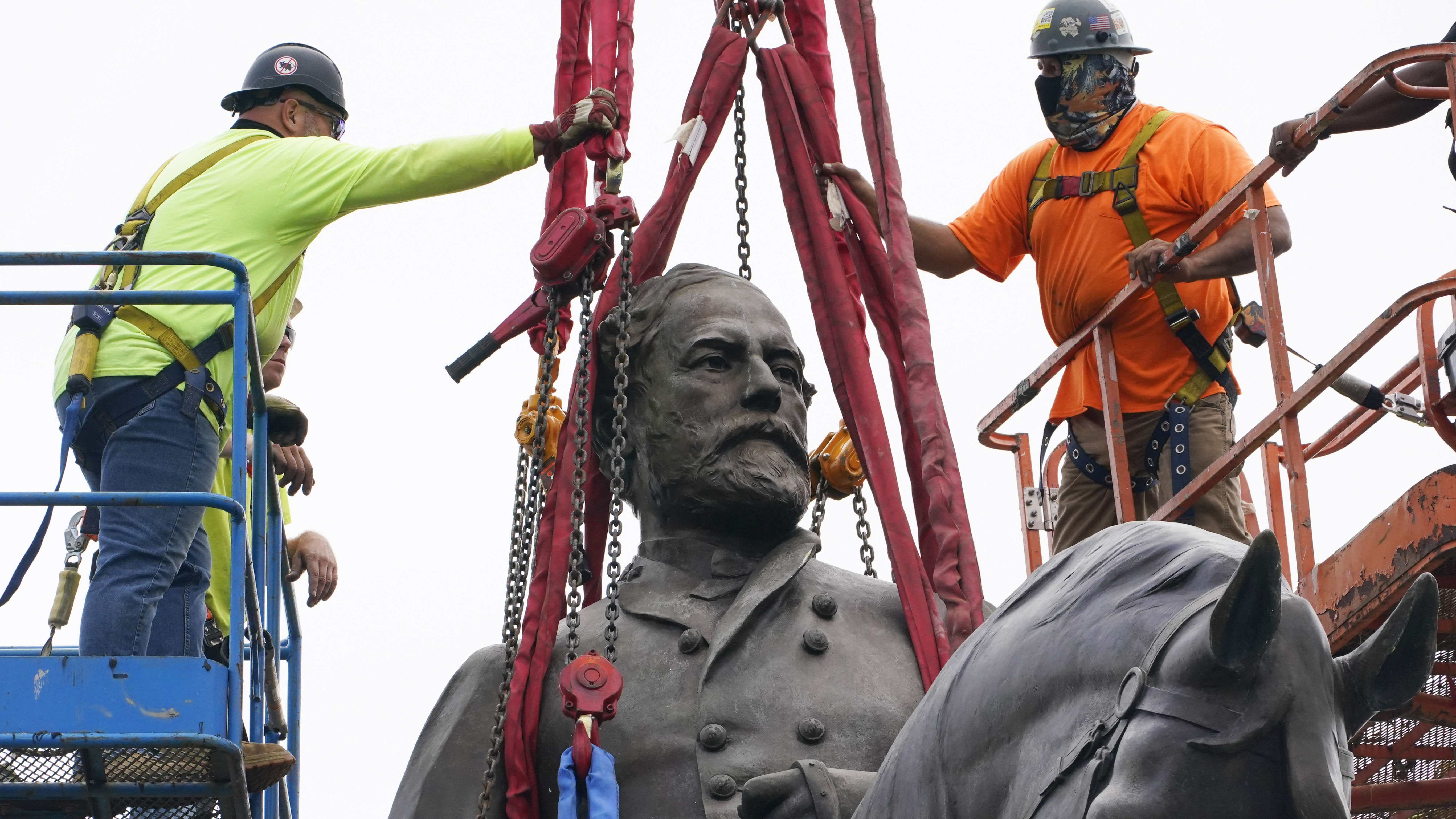 READ MORE: How one man escaped from the top of the World Trade Center

Mr Northam ordered the statue’s removal last summer, citing nationwide pain over the death of George Floyd at the hands of white police officers in Minneapolis. Litigation tied up his plans until the Supreme Court of Virginia cleared the way last week.

The six metre bronze sculpture sat atop a granite pedestal nearly twice that tall, towering above Monument Avenue since 1890 in this former capital of the Confederacy.

State, capitol and city police officers closed streets for blocks around the state-owned traffic circle and used heavy equipment and barriers to keep crowds at a distance. 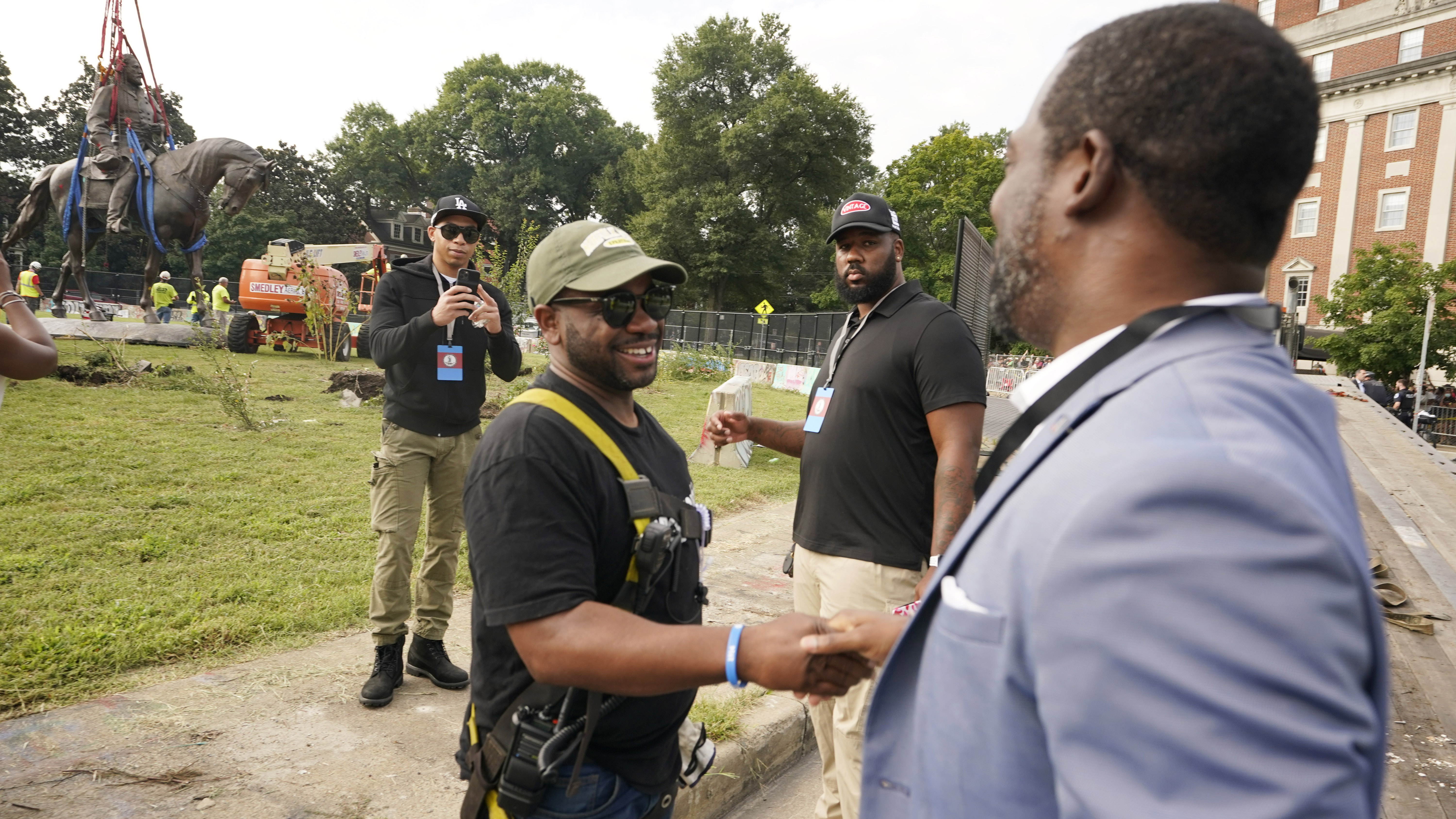 READ MORE: NXIVM co-founder sentenced to three and a half years in jail

The Federal Aviation Administration granted the state’s request to ban drone flights, and the event was live streamed through the governor’s Facebook and Twitter accounts.

“This is a historic moment for the city of Richmond. The city, the community at large is saying that we’re not going to stand for these symbols of hate in our city anymore,” said Rachel Smucker, 28 year-old white woman who moved to Richmond three years ago.

“I’ve always found it to be offensive, as a symbol of protecting slavery and the racism that people of colour still face today.”

The pedestal is to remain for now, although workers are expected to remove decorative plaques and a time capsule on Thursday. 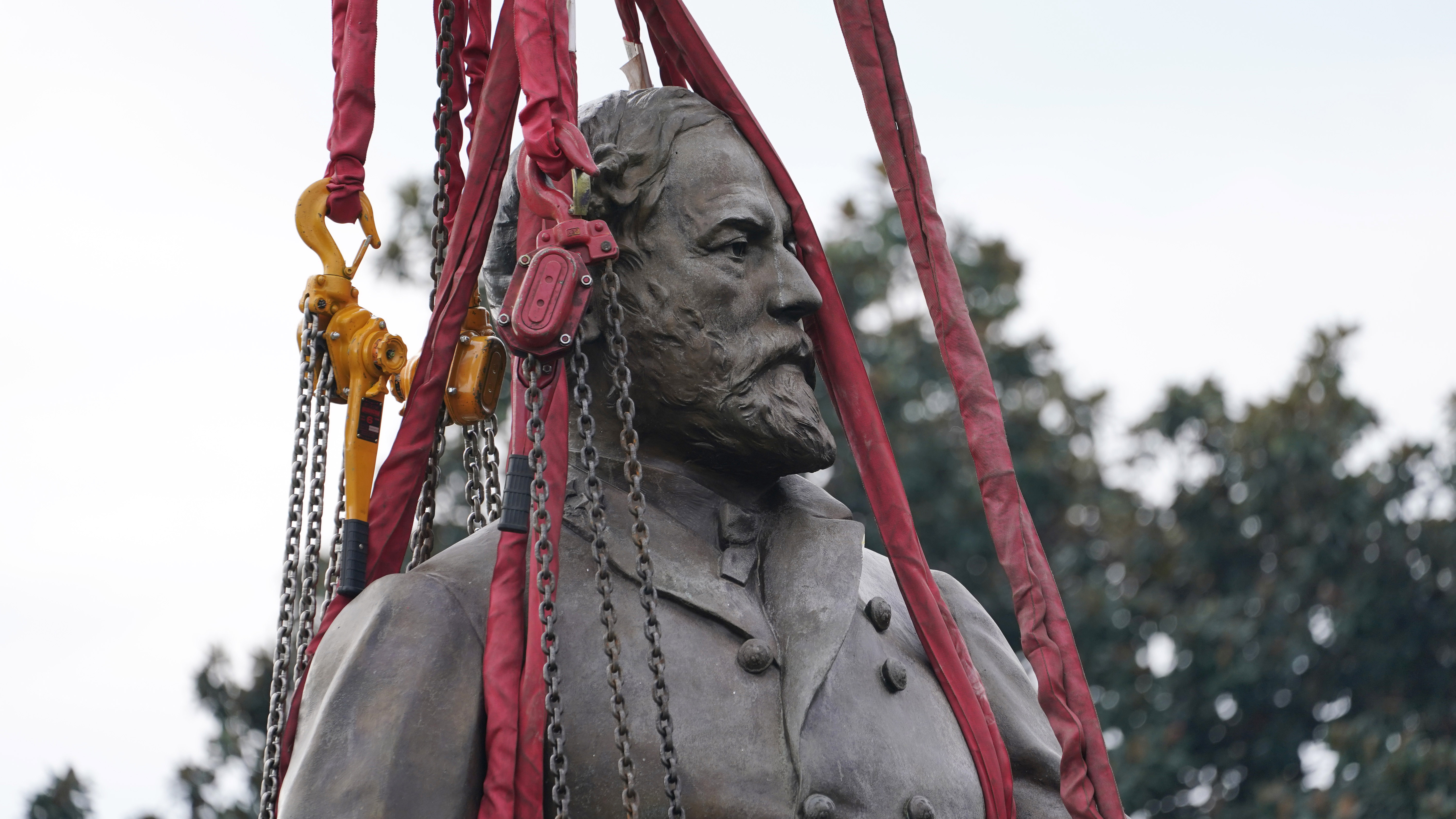 After Mr Floyd’s death, the area around the statute became a hub for protests and occasional clashes between police and demonstrators.

The pedestal had been covered by constantly evolving, colourful graffiti, with many of the hand-painted messages denouncing police and demanding an end to systemic racism and inequality.

The sculpture was valued for its artistic quality, and it stood among four other massive Confederate statues that were removed by the city last summer.

The decisions by the governor and Richmond Mayor Levar Stoney to remove the Confederate tributes marked a major victory for civil rights activists, whose previous calls to remove the statues had been steadfastly rebuked by city and state officials alike. 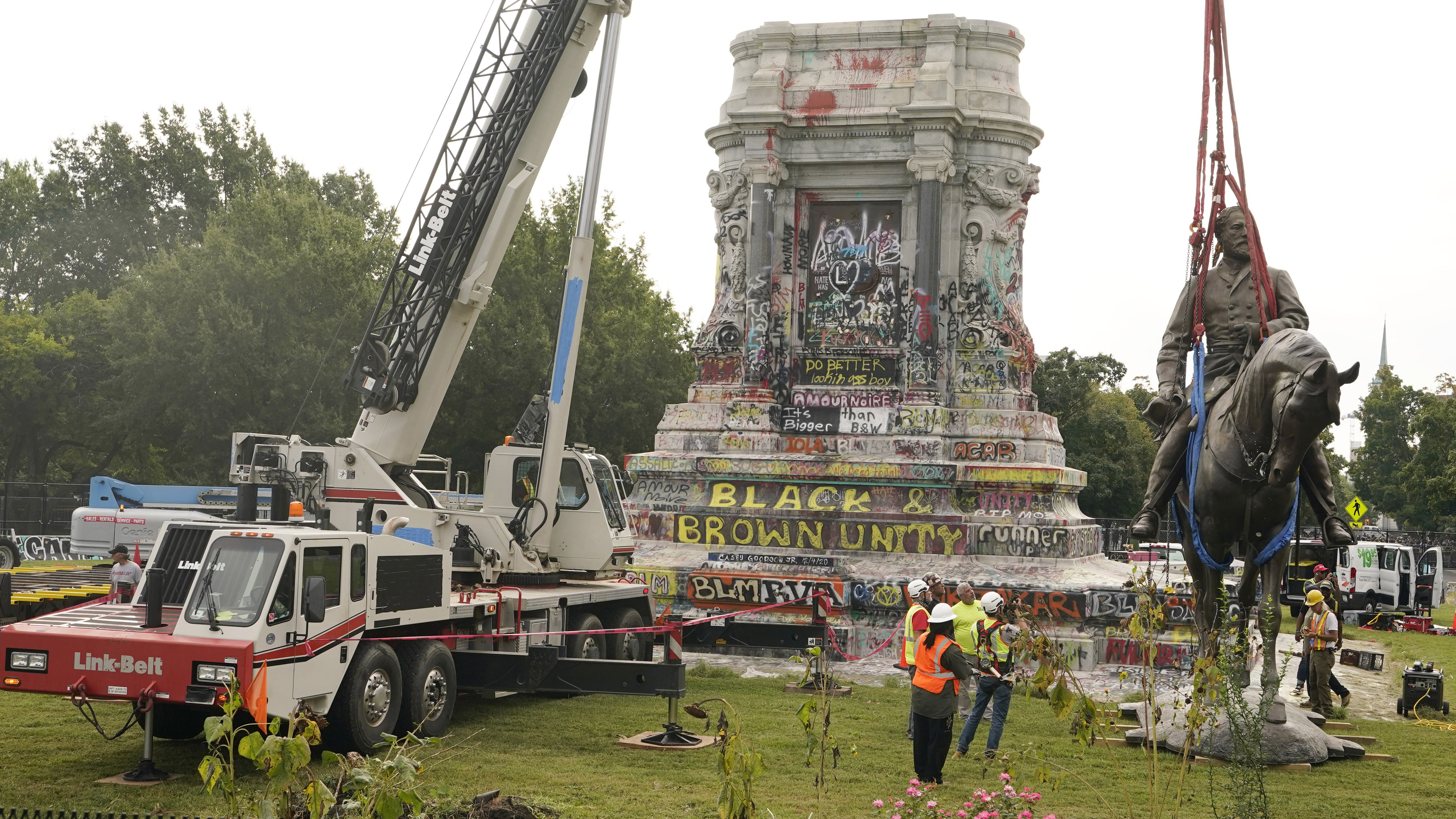 A statue of Black tennis hero and Richmond native Arthur Ashe erected in 1996 is expected to stay.

“I think it’s pretty apropos that the only remaining monument on this tree-lined street is Arthur Ashe, and I’m pretty confident he’ll withstand the test of time," Mr Stoney said.

A previous wave of advocacy and resistance led to a rally of white supremacists in the city of Charlottesville that erupted into violence in 2017. Other Confederate monuments started falling around the country. 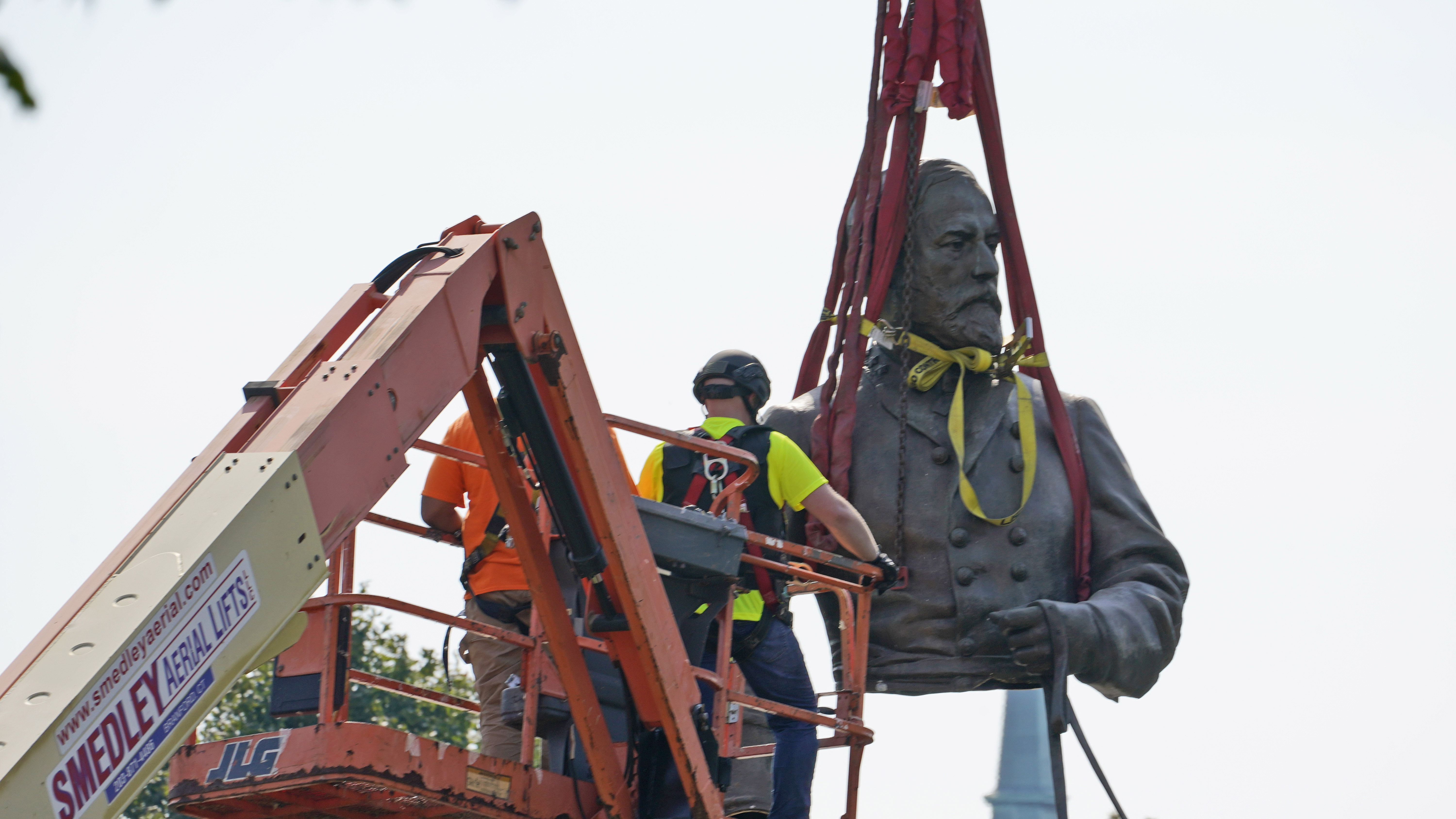 In Virginia, local governments were hamstrung by a state law protecting memorials to war veterans. That law was amended by the new Democratic majority at the Statehouse and signed by Mr Northam, allowing localities to decide the monuments' fate as of July 1, 2020.

Mr Stoney then moved swiftly, citing the continuing demonstrations and concerns that protesters could get hurt if they tried to bring down the enormous statues themselves.

The changes have remade the prestigious avenue, which is lined with mansions and apartments and is partly preserved as a National Historic Landmark district. Mr Northam has tapped the Virginia Museum of Fine Arts to lead a community-driven redesign for the whole avenue.