A huge hoard of Iron Age gold artefacts has been uncovered by an amateur metal detectorist in Denmark.

The "enormous" find consists of almost one kilogram of gold buried 1,500 years ago, according to a press release from the Vejlemuseerne museum, which will exhibit the hoard.

Described by the museum as "one of the largest, richest and most beautiful gold treasures in Danish history so far," the hoard was discovered in Vindelev, near the central Danish town of Jelling, by a rookie detectorist called Ole Ginnerup Schytz. 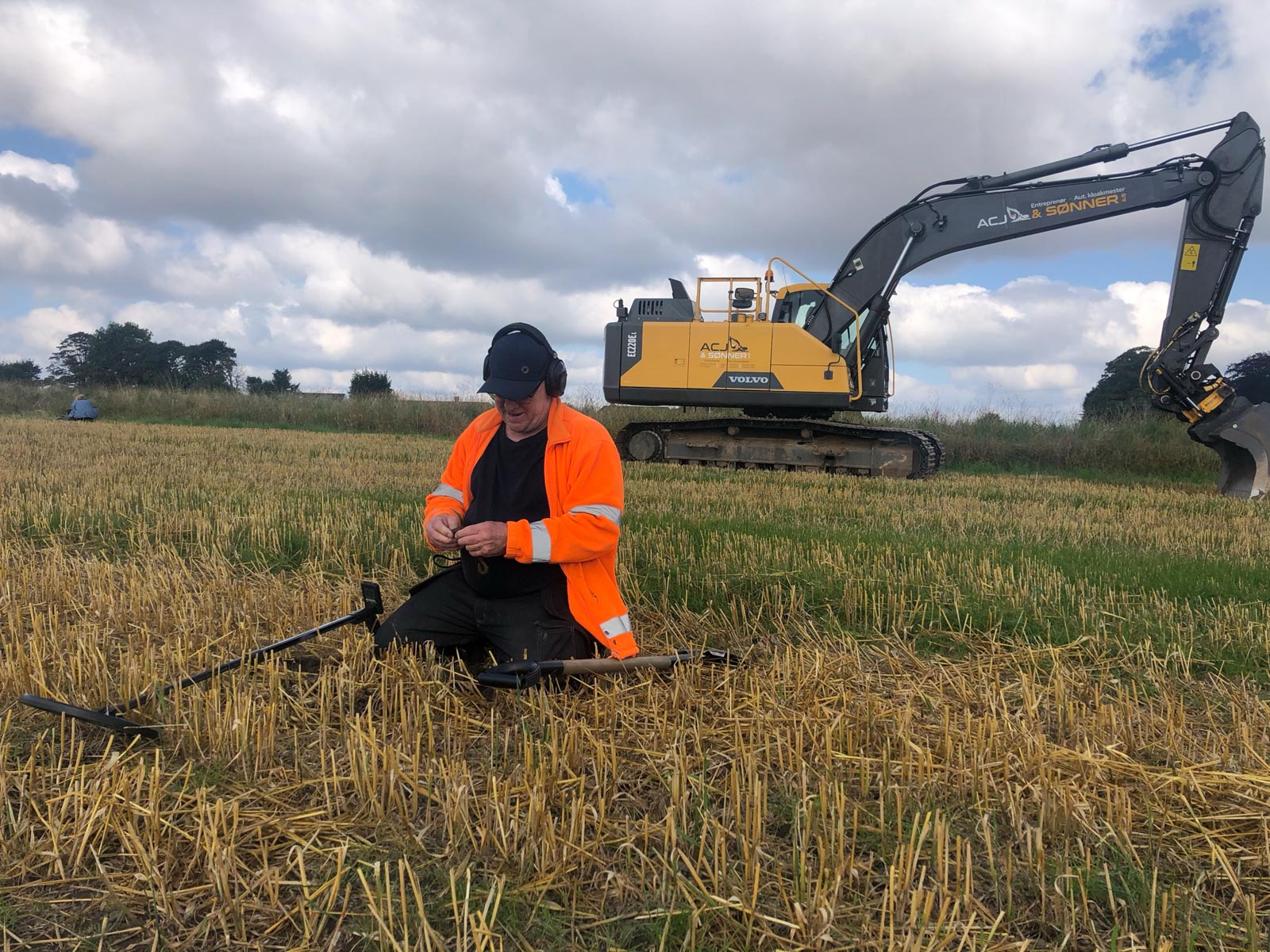 Mads Ravn, head of research at Vejlemuseerne, told CNN that he almost fell off his chair when Mr Schytz sent him a photo of an object, asking him if it was anything significant.

Mr Schytz had only recently acquired his metal detector and been given permission to use it on his friend's land. Within a few hours of starting, he had uncovered the hoard.

"I told him he might as well just sell the detector now because he already peaked," said Mr Ravn, adding: "It doesn't get better."

Archaeologists from the Vejlemuseerne then excavated the site along with a team from the National Museum, uncovering a treasure trove including "huge medallions the size of saucers," according to the Vejlemuseerne. 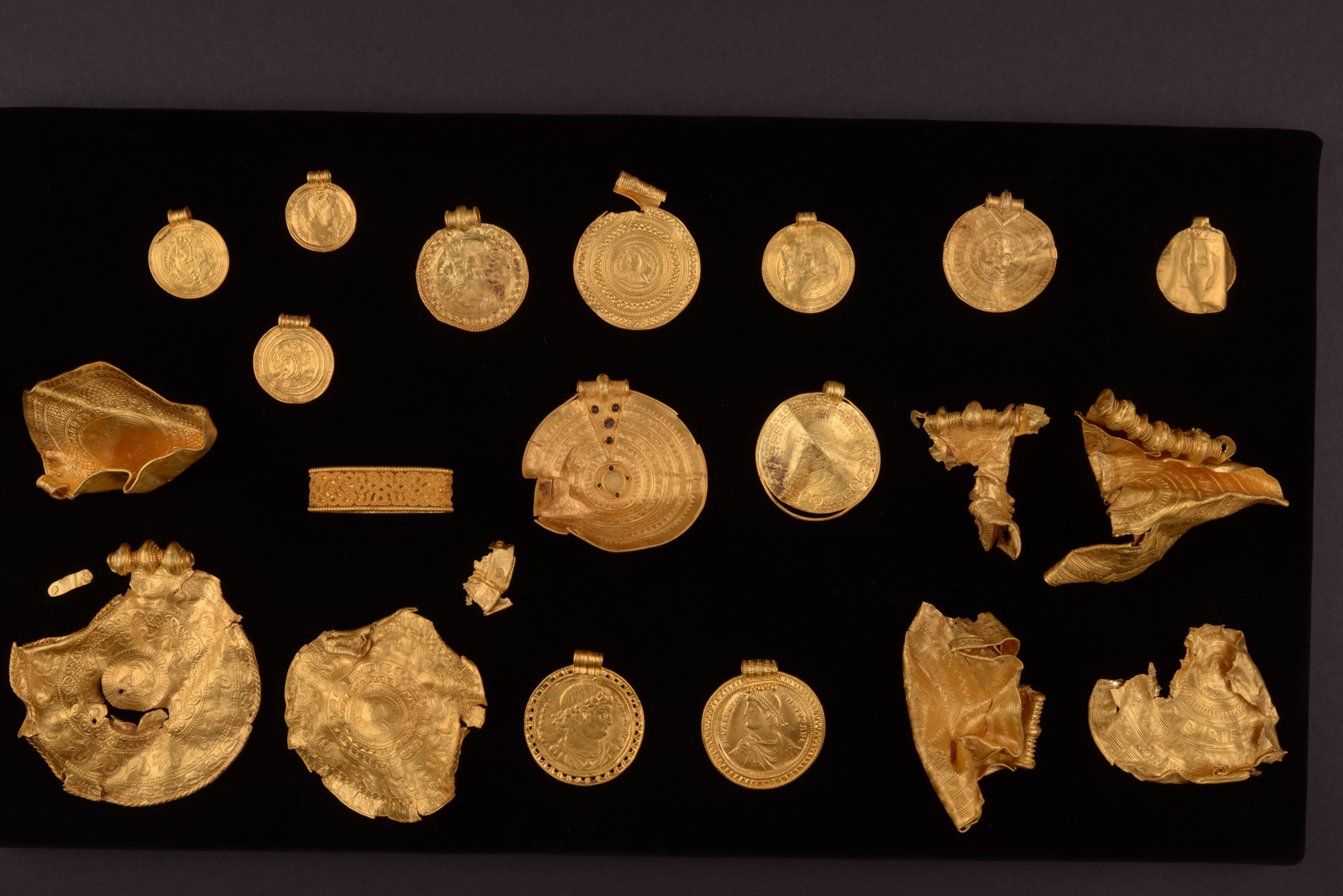 The artefacts were buried in a longhouse by an Iron Age chieftain, revealing that Vindelev was a centre of power at the time, the museum added.

Whoever buried the hoard would have been immensely wealthy and powerful, said Mr Ravn, adding that the hoard contains medallions that are thicker than normal.

In the sixth century the chieftain attracted skilled artisans to the area, and later buried his large gold hoard.

It is not clear exactly why he buried it, but Mr Ravn believes it was buried as an offering to the gods. 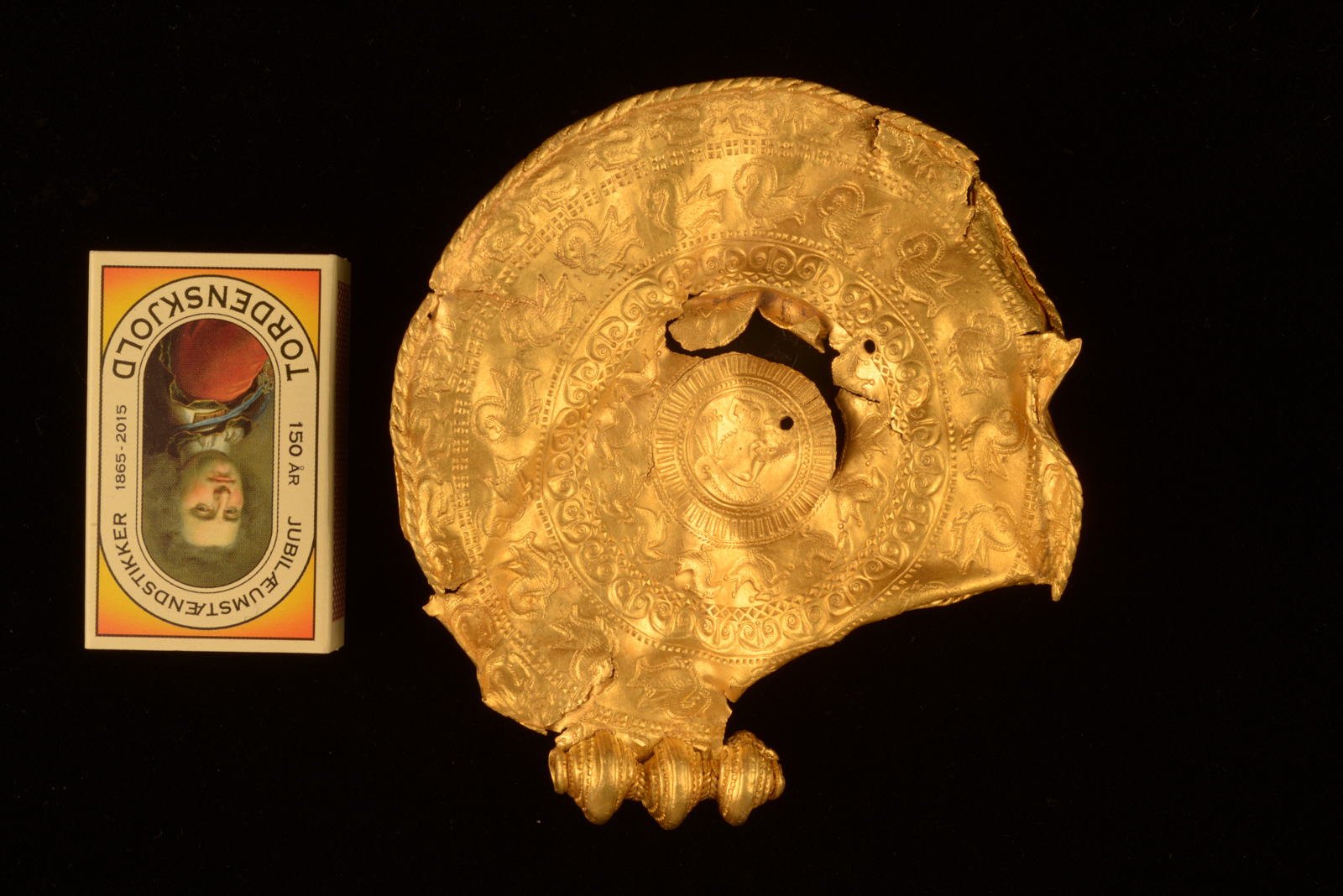 Some experts have suggested the gold was buried to save it during a time of war, but Mr Ravn said the combination of objects suggests it was more likely to have been an offering.

The hoard contains saucer-sized decorated medallions called bracteates, as well as Roman coins that had been fashioned into jewellery.

One of the bracteates is decorated with a male head and a number of runes, as well as a horse and a bird.

A runic inscription on the horse reads "the high one," according to preliminary research, which could refer to the chieftain or the god Odin. 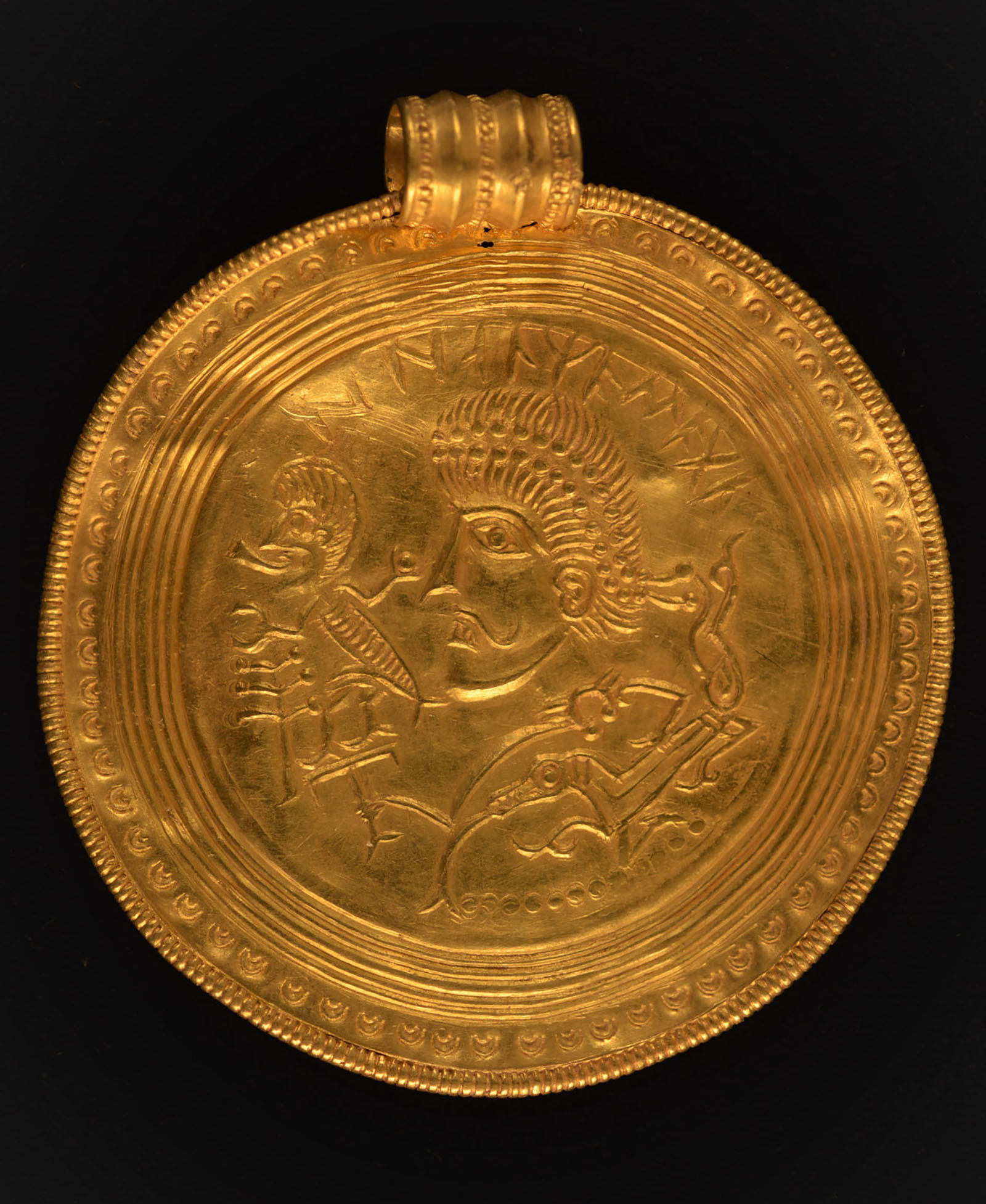 At the time, Norse mythology was developing and would have been in competition with more ancient religions, said Mr Ravn, around 300 years before the ancient sagas were written down.

In addition, one heavy Roman gold coin dates from the rule of Constantine the Great (324-337 AD), and reveals that Europe was already well connected during the Iron Age.

The Roman coins show how mobile people were at the time, said Mr Ravn, with people from northern Europe moving south to plunder or serving as mercenaries in Roman armies before bringing the coins back home.

"There weren't these borders," said Mr Ravn, "so people were moving around."

The period also saw a climate catastrophe caused by the ash cloud from a large volcanic eruption in Iceland in 536 AD, which led to years of famine.

"It was a very chaotic period in some ways," Mr Ravn said.

Some of the largest gold hoards in Scandinavia were buried around this time, and some objects found on the island of Hjarno, central Denmark, have similarities to those in this latest hoard. 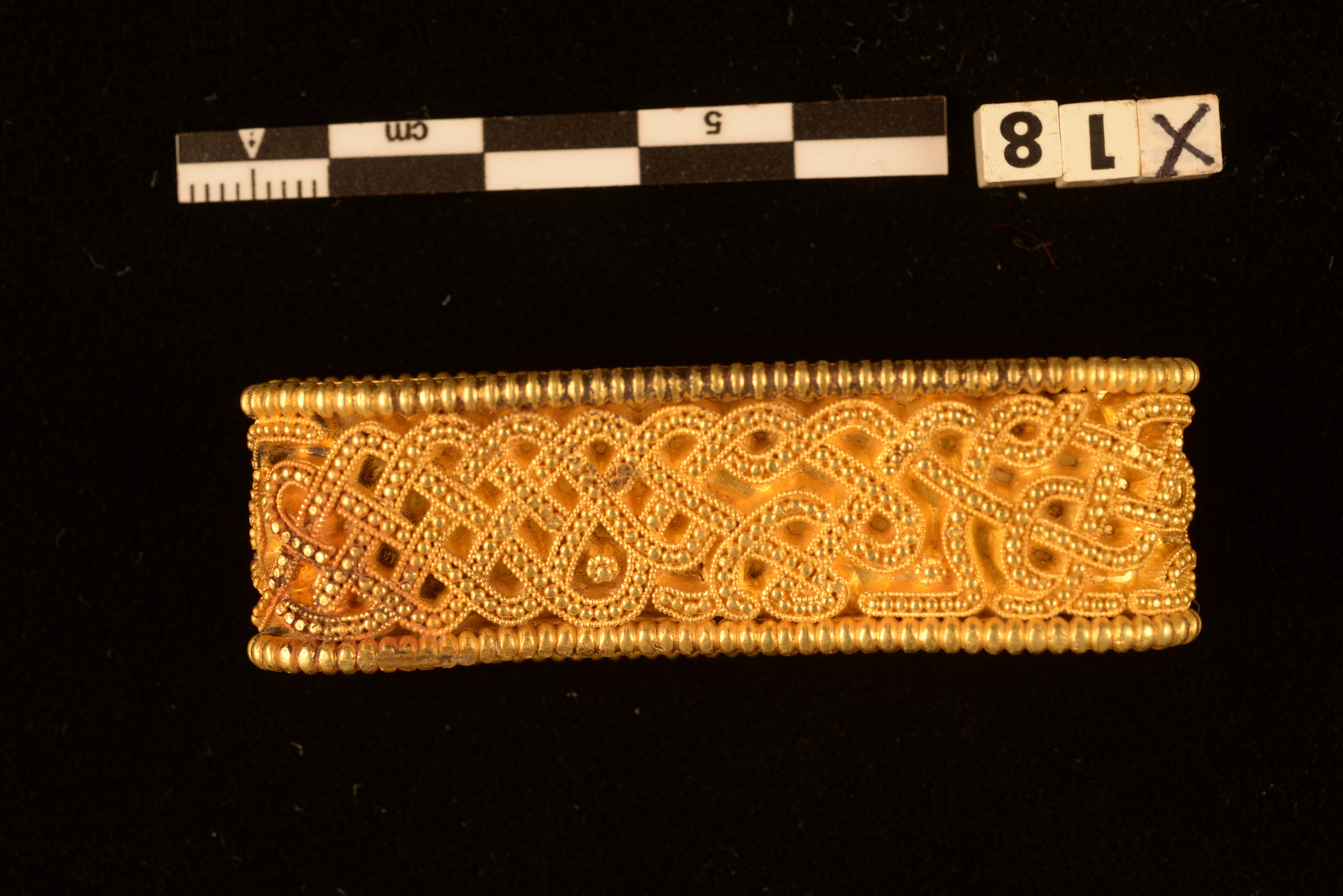 This suggests there might have been an alliance between the rulers of the two areas, and the beginnings of Denmark as a united kingdom, Mr Ravn said.

The hoard will go on display at the Vejlemuseerne in February 2022 as part of a large Viking exhibition.

"It's kind of a pre-chapter to the Viking age," said Mr Ravn. "We already have the echo of the early Viking age coming along in that time."