Giancarlo Esposito, the charismatic yet terrifying star of Breaking Bad and Disney's The Mandalorian, has a unique aptitude for villains.

You'll soon meet him as the dictator of an island nation named Yara, not on the silver screen or any streaming service, but in the video game Far Cry 6.

Reporter Mark Santomartino sat down with him ahead of the game's October 7, 2021 release in Australia.

Far Cry is famous for its bad guys. You're famous for playing bad guys. Having you cast as Anton Castillo is almost too perfect but how do you seeing it fitting on your resume?

"For me, it begins with a very well-told story and a different medium that I haven't really played," explains Giancarlo.

"I really loved the story that had a political element to it and it had a leader in Anton who was trying to save his little small island from commercialisation and other large countries that want to eat it up."

"So there was not only a political message but also an economic message as well."

I've got it on good authority that you didn't want to just do Gus Fring (Breaking Bad) all over again. Who is Anton Castillo? Obviously he's a dictator and a father but what does he want? Why is he so frightening?

"Well he resents someone who has an ideal for his country, a vision for his people."

"The country is very poor. He suffered growing up under the dictatorship of his father and then was pushed out so he regained power to really bring his vision about which was new architecture, new infrastructure, all of these things based on the fact that his country had natural resources that he could exploit."

"In doing so he has to of course – as most small countries or any country at all – has to try to figure out how to pay those workers who are going to get all those natural resources and have them be a resource for the country in doing that."

"Another thing I love was the fact that he's a father and he's trying to pass on a certain his legacy to his son who's not quite ready to receive them. So it's a story about lessons and about learning and also about mortality as well." 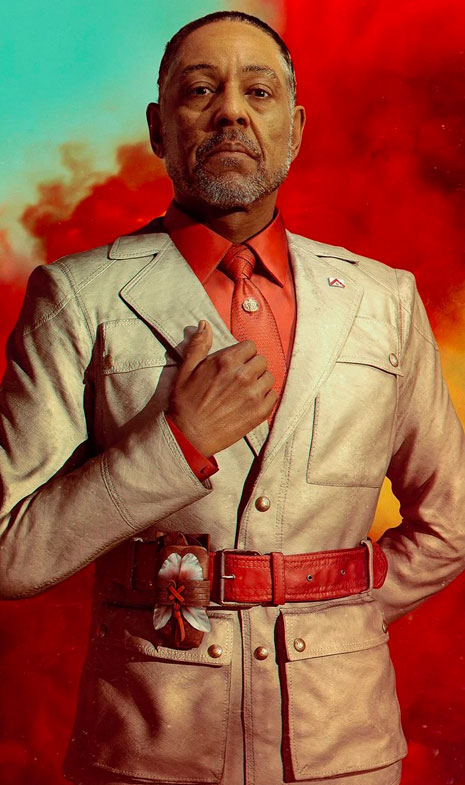 Speaking of mortality and lessons you actually hand your son a grenade in this so he's really not a typical father figure?

"A little bit of tough love. Toughen up kid!"

"This is a great story in that this relationship has empathy and Diego has empathy for the revolutionaries but Anton of course knows that that will be the end of the governing power."

"So to train his son to say yes, you can have compassion, but you must rule with an iron hand when I'm not around."

You're a father in real life and you're playing a father in this game. Did you bring anything or take anything away from that as being a dictator Dad? I assume you're not handing your own children grenades (laughs)?

"I have four girls. I'm not gonna hand them a grenade."

"I'm going to teach them in a way to strengthen their minds and their spirits because we're living in a world where things are topsy turvy and things are uncertain."

"That's part of what Anton's trying to teach Diego you know, you have to make a decision, a choice and that's sometimes difficult without the proper advice; parental advice.

"But I'm kind to my girls and I realise that I must listen to them because they have something to teach me as well."

From the moment we sat down to chat it was obvious you're a sweet, charismatic guy. How do you feel about playing these really terrifying bad guys? You're famous for being the leader of drug cartels and chasing down baby Yoda for all sorts of nefarious reasons and now you are a genuine dictator. It just seems to get more extreme!

"It really does, you know."

"I'm of the mindset of the world of today…I do believe that people need to be told or taught."

"Because people have a certain amount of confusion, they want to be guided or lead. Thus the advent of our electronic society that we're always looking to for information from some other source, not from inside."

"This is a big part of what I believe is that you know, when you're able to take control of the chaos and dictate, direct, suggest, manipulate, people will do what you ask them to do.

Speaking of all that technology and bringing Anton to life, I've seen some of the behind the scenes videos of you in the motion capture suit. You voiced a video game character in 2014 for Payday 2 but the technology has come a long way since then.

"Yes it took some time and it was a different way of working.

"I love the theatre and that's why I cut my teeth in New York I've got 13 Broadway musicals and about 10 plays."

"Doing this particular project when you're in a tight leotard and in a volume room with many many cameras as well as a camera attached to a helmet on your head recording all of your facial movements and recording all of your joint movements, as well physicality a wide shot and something that's catching all of your emotion, you're really.having to work through all of that technology to create a connection with your fellow actor." 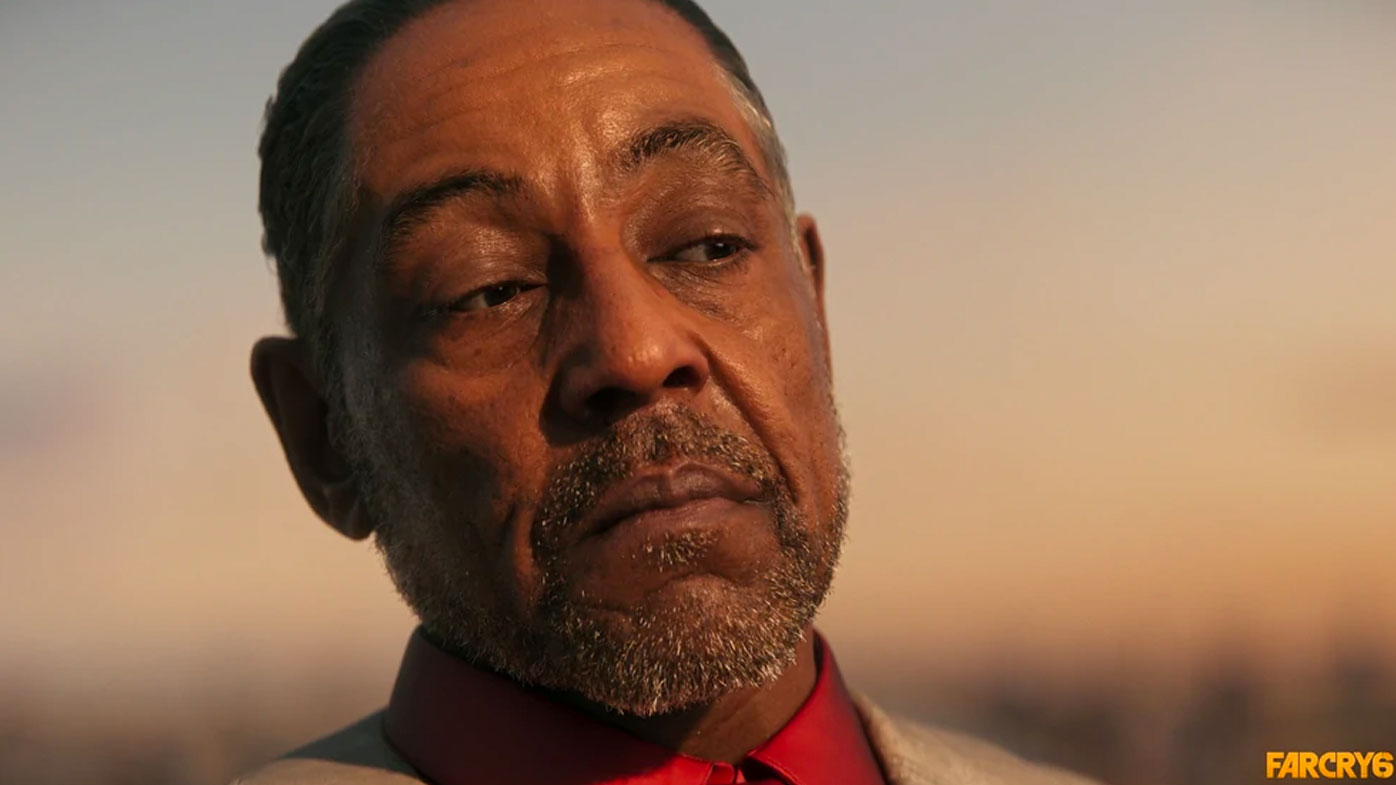 "When I first saw a version, a little piece of that, I was amazed by how real it looked."

"I know many actors are afraid of gaming and motion capture because they feel like they're going to put themselves out of a job."

"So when you were able to enter this game and be someone who is empowered to stand up and allow your voice to be heard and try to move Anton off his pedestal, I think you have a great game."

"You can take many different routes to get to his castle, to his his White House so to speak."

"You can take many different routes to join up with other revolutionaries. You really play a big part morally and and spiritually within the game and I think our audiences are really gonna love it.

Have you had a chance to play the game yet?

"I haven't played the game yet but I'm looking forward to it."

"I'm not a big gamer but I understand that this particular game has a very new and different way of looking at our world and I'm excited that it's displayed in this way and the people have a chance to enter it and have some fun but also learn something about the political economic and personal structure of what Anton is trying to do."

Yes you're trying to take down a dictatorial regime, but you can recruit angry roosters to help you do that so the game can't take itself too seriously?

"It also plays into poorer countries and their people finding a way of making do with what they have."

"We live in a throwaway culture and in the culture and the world of Far Cry you use whatever you have to create the weapons you may need or the technology to protect yourself or advance your revolution.

Speaking of using the weapons you have, during motion capture you brought in props like cigars and squishy balls to double as grenades?

"Well, you know, I felt as if Anton should have certain characteristics and be in a way on top and relaxed, so I thought a cigar would be a great thing to bring in and have him be someone who enjoys that because that's a resource of his country (tobacco)."

"For me to get into character when you don't have real set pieces or even a costume because that's going to be then put in and made by these wonderful artists at Ubisoft… something to hold on to this tangible is a great thing."

Finally, I have to ask and it's not about Far Cry. Is Moff Gideon guaranteed to be coming back in the Mandalorian season three?

"I teased that in a way that is constructive but I think we will without a doubt.

"We must see Moff again. There's too much we don't know about him or why he knows what he knows."

"We don't know why he wants this child (baby Yoda aka Grogu). Is it altruistic, is he wanting to take over and put the universe back together or does he want to be the ultimate dictator of that world that he inhabits?