Australian Prime Minister Scott Morrison has met with the leaders of the US, Japan and India for the first face-to face meeting of the Quad nations in the White House.

Mr Morrison has has stressed the importance of a free and open Indo-Pacific with the four leaders also announcing significant initiatives on vaccine diplomacy, climate change, infrastructure and space exploration.

"The Indo-Pacific is a region that we wish to be always free from coercion, where the sovereign rights of all nations are respected and where disputes are settled peacefully and accordance with international law," Mr Morrison said today.

READ MORE: PM will face emissions targets when he is home Mr Biden declared the alliance are showing they "know how to get things done" in an increasingly complicated corner of the globe.

They made no direct mention of China as they opened the group's first ever in-person meeting, but the Pacific power was sure to be a major focus as they headed into private talks.

On broader issues, Mr Morrison and his counterparts have repeatedly made a case that Australia and likeminded allies need to deliver results on the COVID-19 pandemic, climate change and other fundamental matters with the world in what Mr Biden deemed a race between democracies and autocracies.

Mr Morrison and the others seemed to pick up that message as they opened today's summit.

"We are liberal democracies, believe in a world order that favours freedom," Mr Morrison said. "And we believe in a free and open Indo-Pacific, because we know that's what delivers a strong, stable and prosperous region."

Before the gathering, Mr Biden sat down with Mr Modi in the Oval Office. He was also to have a one-on-one with Mr Suga, who is soon to step down from his post.

With Mr Modi by his side, Mr Biden played up ties to India — referencing Vice President Kamala Harris' Indian heritage and even his own family ties to the subcontinent.

The president also made clear he saw tightening relations with the world's biggest democracy — one that shares a neighborhood with Taliban-controlled Afghanistan and China — as vital for both sides. Mr Modi, who met with Ms Harris and American business leaders on Thursday, noted the importance of the Indian diaspora for the US economy and said he wanted to find ways the two countries could work together to strengthen their respective economies.

At the afternoon summit, the Quad leaders were expected to announce a coronavirus vaccine initiative and plans to bolster semiconductor supply chains.

Mr Biden announced the Quad had created a program to bring graduate students in science and technology to US universities.

The Quad is an informal alliance formed during the response to the 2004 Indian Ocean tsunami that killed some 230,000 people.

Mr Biden has sought to reinvigorate the alliance, putting a spotlight on a chief foreign policy goal: greater attention to the Pacific and a rising China. The alliance met earlier this year, virtually, and announced plans to boost vaccination manufacturing in India.

The Japanese and Indian governments welcomed a recent announcement that the US, as part of a new alliance with Britain and Australia, would equip Australia with nuclear-powered submarines.

That will allow Australia to conduct longer patrols and give it an edge on the Chinese navy. But the announcement infuriated France, which accused the Biden administration of stabbing it in the back by squelching its own $66 billion deal to provide diesel-powered submarines. 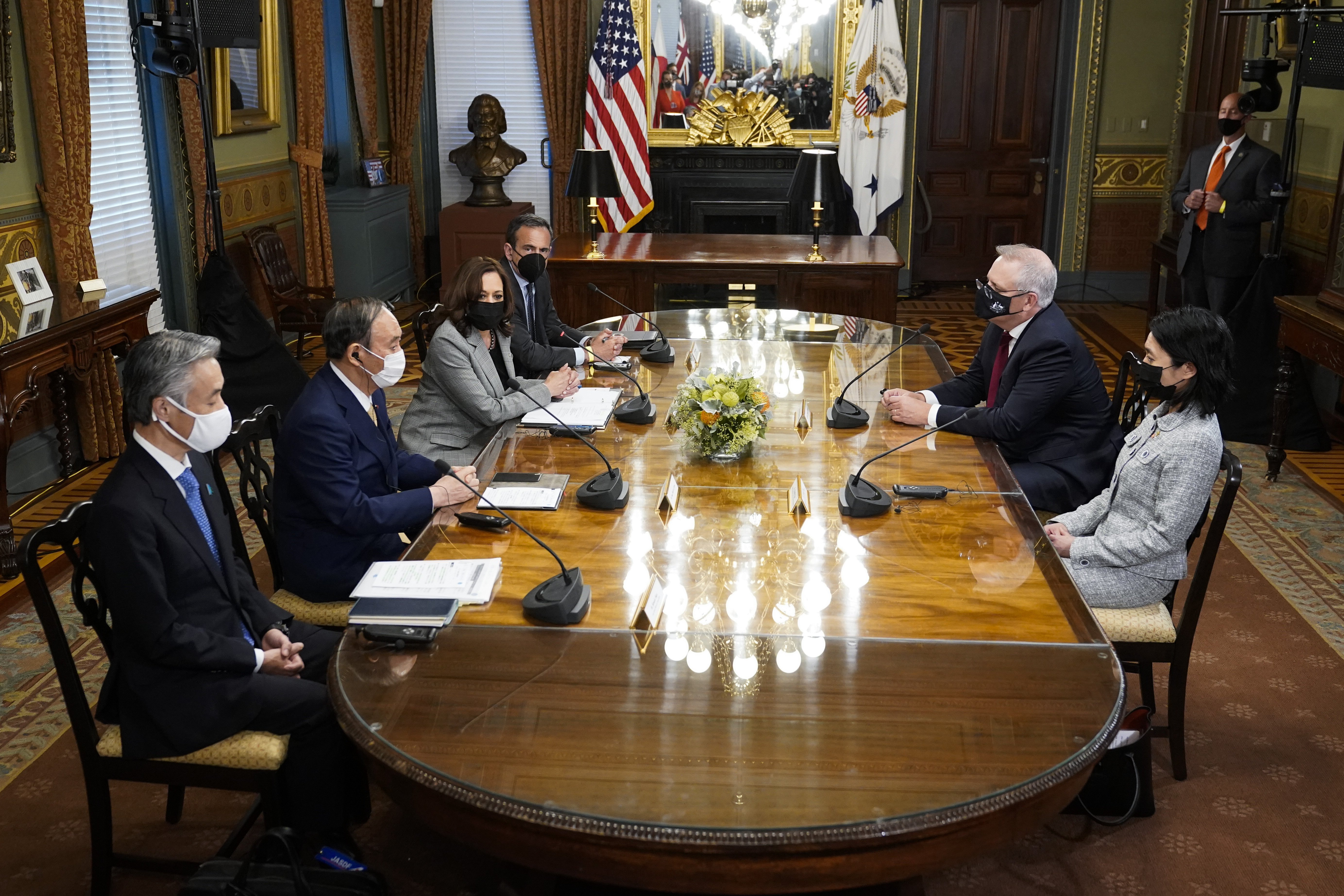 Tensions between Mr Biden and French President Emmanuel Macron eased after the two leaders spoke Wednesday and agreed to take steps to coordinate more closely in the Indo-Pacific.

Michael Green, who served as senior director for Asia at the National Security Council during the George W. Bush administration, said Japan and India welcome the United States-United Kingdom-Australian alliance "because it will really for the next 50 years reset the trajectories in naval power in the Pacific and from the perspective of those countries stabilise things as China massively builds up its naval forces."

But Chinese Foreign Ministry spokesperson Zhao Lijian has called it a reflection of "outdated Cold War, zero-sum mentality and narrow-minded geopolitical perception" that will intensify a regional arms race.

Beijing has also sought to push the notion that creation of the alliance indicates the US will favour Australia in the Quad at the expense of Japan and India, said Bonny Lin, senior fellow for Asian security at the Centre for Strategic and International Studies in Washington.

China also has tried to undercut the Quad as out of step with other nations in Southeast Asia and portrayed members of the Quad as "US pawns," Dr Lin said.

The White House meeting played out as China continues making shows of force in the region concerning Taiwan.

The meeting also concludes a busy week of wider diplomacy for Mr Biden, who addressed the UN General Assembly and hosted a virtual global summit on COVID-19.

Mr Biden and leaders of other wealthy nations face criticism about the slow pace of global vaccinations and the inequity of access to shots between wealthier and poorer nations. The pushback from leaders of low- and moderate-income countries come though Biden announced plans for the US to double to one billion doses its purchase of Pfizer vaccine to share with the world.

Mr Modi was expected to bring up Afghanistan during his meeting with Mr Biden and to raise objections to the Taliban's effort to get recognition at the United Nations. The Indian government also has concerns about the influence it believes Pakistan's intelligence service exerted in how factions of the Taliban divvied up government offices in Kabul.

Mr Suga was expected to discuss China, North Korea, Afghanistan, the COVID-19 response and climate change. He highlighted the alliance's "strong solidarity between our four nations, and our unwavering commitment to the common vision of a free and open Indo-Pacific."

North Korea last week said it successfully launched ballistic missiles from a train for the first time, striking a target in the sea some 800 kilometres away.

That test came after the North this month said it tested new cruise missiles, which it intends to make nuclear-capable, that can strike targets 1500 kilometres away, a distance putting all of Japan and US military installations there within reach.