When the khaki-coloured landscapes of Afghanistan are transformed by a patchwork of pink, white and purple each spring, farmers rejoice. Their cash crop of poppies is ready for harvesting.

Opium cultivation has long been a source of income for rural communities across the country, a land besieged by decades of war. But for the United States, those same colorful scenes symbolised the enemy.

"When I see a poppy field, I see it turning into money and then into IEDs [improvised explosive devices], AKs [assault rifles], and RPGs [rocket-propelled grenades]," said General Dan McNeill, commander of the NATO-led International Security Assistance Force (ISAF) in Afghanistan. 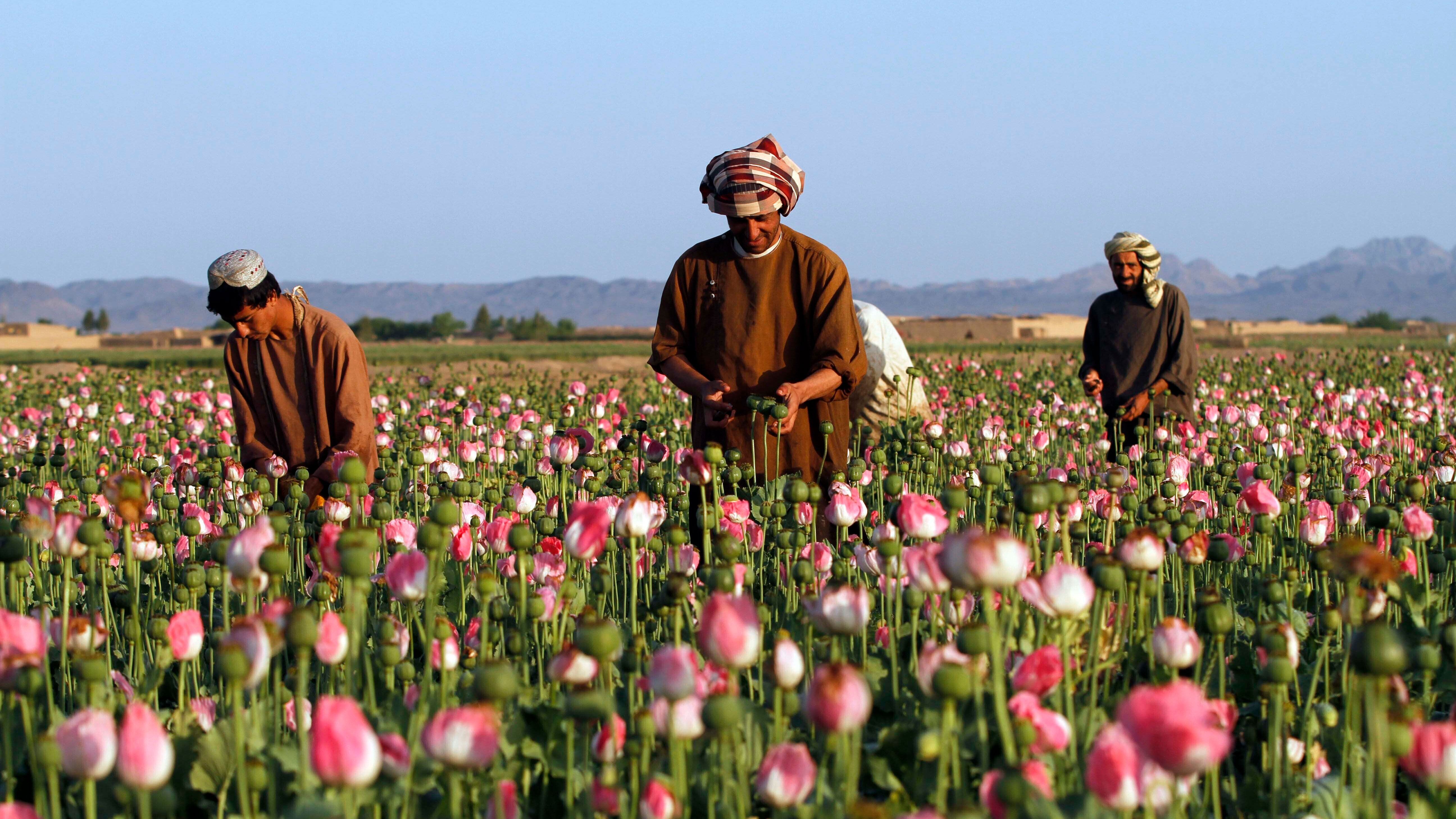 This narrative contributed to how the United States' war on drugs was fought – and lost.

Over 20 years, the US squandered nearly $9 billion on a counternarcotic policy that – perversely – helped to fill the Taliban's pockets and, in some regions, fuelled support for the insurgents.

Now in power, and with an interim government in place, the Taliban are navigating how to manage Afghanistan's entrenched drug economy – the country's biggest cash crop – as the whole nation teeters on economic collapse.

Just two days after the fall of Kabul, Taliban spokesperson Zabiullah Mujahid pledged "full assurances to the world" that Afghanistan under Taliban rule would not be a narco-state.

"Afghanistan will not be a place of cultivation of narcotics, so the international community should help us and we should have an alternative livelihood" for opium growers.

But how the Taliban will do that remains uncertain.

Afghanistan produced an estimated 85 percent of the world's opium in 2020, according to the latest United Nations figures.

In 2018, the UN estimated that opium economy accounts for up to 11 percent of Afghanistan's GDP.

But it's unclear how much the Taliban have profited – and will continue to do so – from the opium economy, with estimates around these numbers varying widely.

"Clearly drugs are a very important aspect of the Taliban's profits," Vanda Felbab-Brown, a senior fellow at the Brookings Institution, told CNN.

"But just like with many other insurgent groups, there is often way too much … mystique afforded to the drug economies. 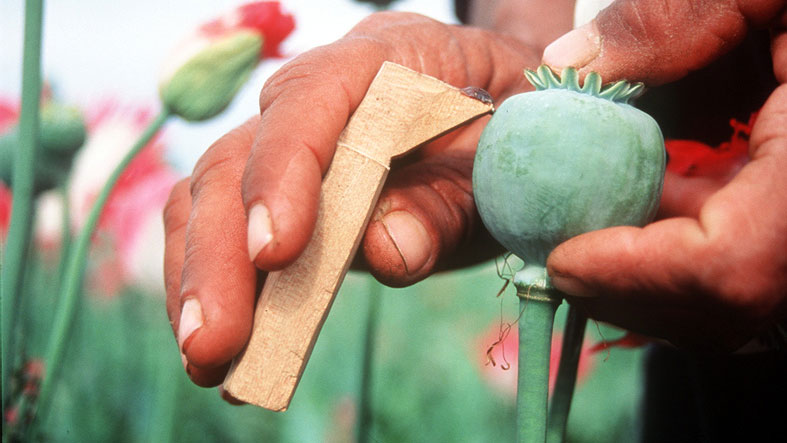 What competent, even moderately competent insurgents and, frankly, criminal groups do, is to simply tax anything in the area, where they have enough influence to be able to enforce the collection of informal taxation," Felbab-Brown said, noting this can range from sheep stocks to meth production.

While it's impossible to pinpoint just how profitable the opium economy is to the Taliban, over the last two decades, estimates have ranged from the tens of millions to low hundreds of millions. Beyond those figures it's really just "fantasy," she said.

At the beginning of the US-led invasion in 2001, British coalition forces were tasked with developing a counternarcotic policy, but around 2004, the US muscled its way in, Felbab-Brown said, pushing for a more aggressive eradication effort.

That included aerial crop spraying, a campaign from 2005 to 2008 that infuriated some Afghan communities and damaged relations between Kabul and Washington.

The importance of the opium trade in financing the insurgency was "routinely cited as a primary reason" for the US' increased counternarcotic efforts, according to the US Special Inspector General for Afghanistan Reconstruction (SIGAR) 2018 report.

But the data to support that claim was disputed, and American policy flip-flopped throughout administrations and departments during the 20-year war.

Prior to 2004, the US strategy on drugs was viewed as an "uncoordinated effort [that was] ineffective and in need of significant changes," the SIGAR report said.

"Everyone did their own thing, not thinking how it fit in with the larger effort. State was trying to eradicate, USAID was marginally trying to do livelihoods, and DEA was going after bad guys," one senior Department of Defence official was quoted as saying in the report.

In 2004, however, poppy production spiked, leading to some officials calling for a stronger eradication campaign. 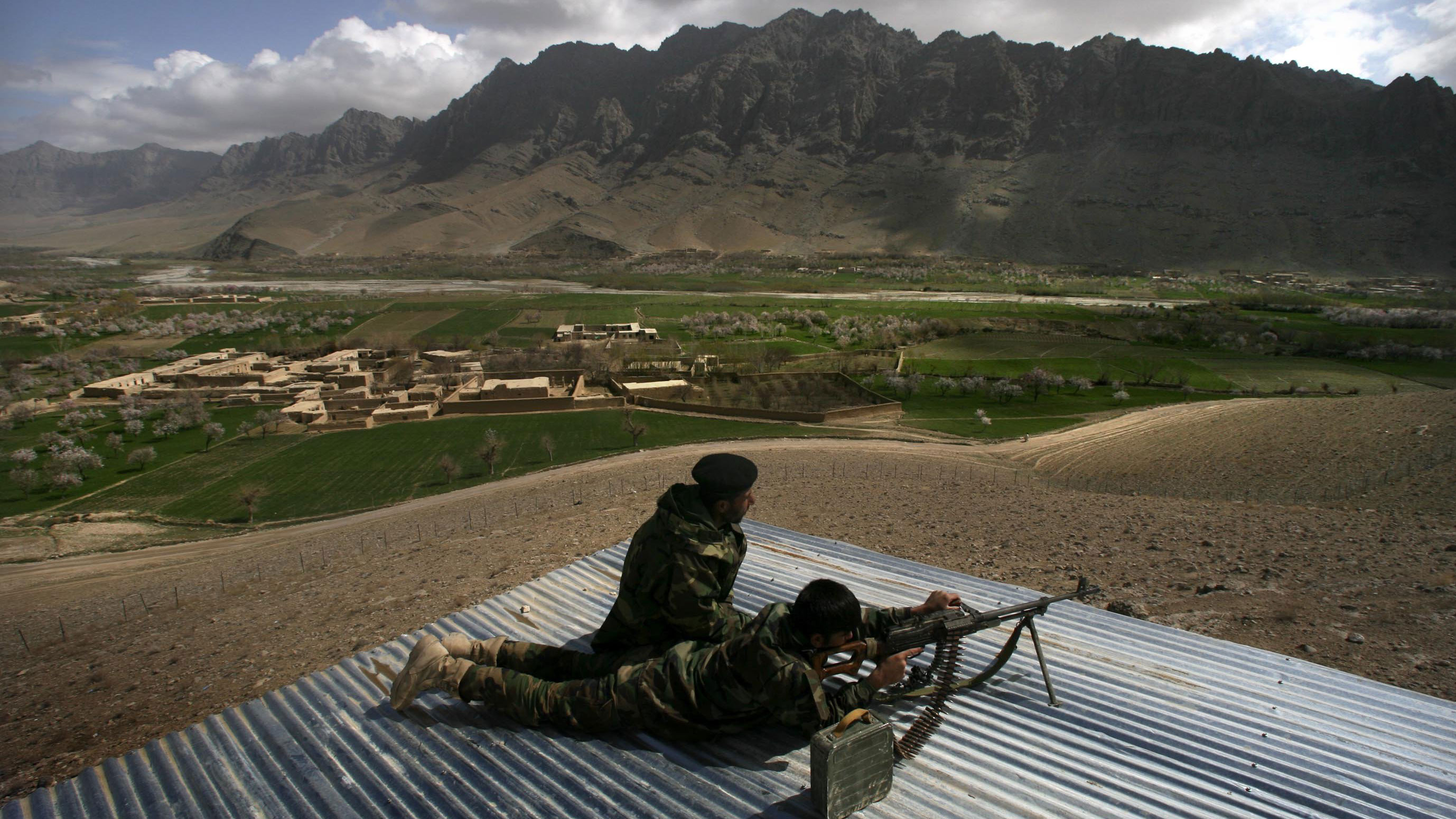 Robert Charles, the then-assistant secretary of state for international narcotics and law enforcement affairs, testified that spring that there are "no more urgent and fundamental issues than the drug situation, which if left unchecked, will become a cancer that spreads and undermines all we are otherwise achieving in the areas of democracy, stability, anti-terrorism and rule of law."

"Opium is a source of literally billions of dollars to extremist and criminal groups worldwide," Charles said, adding that slashing the opium supply was "central to establishing a secure and stable democracy, as well as winning the global war on terrorism."

The US Drug Enforcement Administration's (DEA) operating budget in Afghanistan under President George W. Bush's tenure more than quadrupled from $3.7 million in 2004 to $16.8 million in 2005, then reached $40.6 million in 2008, according to figures from a 2012 Congressional Research Service report.

In 2009, however, the late US special representative for Afghanistan and Pakistan Richard Holbrooke called the US eradication program "the least effective program ever."

That same year, under the Obama administration, the US scaled back poppy eradication attempts.

However, they struggled to effectively implement an "alternative livelihoods" approach — a program that incentivised governors in poppy-free provinces and encouraged farmers to grow other crops, such as saffron.

But in 2017, the US military once again revved up eradication, launching Operation Iron Tempest, a mission that used B-52 bombers, F-22 fighters and other high-precision warplanes to strike a network of drug labs the US claimed was helping to generate around $200 million annually for the Taliban.

The mission was unsuccessful, with experts concluding they'd largely targeted empty compounds owned by local traders – at the cost of numerous civilian casualties.

David Mansfield, who has studied the Afghan drug economy for more than 20 years, says that one of the fundamental issues that led to "erroneous statistics" is the idea that the Taliban run a taxation system based on price or value.

The international community widely believes that the Taliban take 10 per cent of the value of drugs, he said.

But in practice, he says that's incredibly difficult to administer.

"I don't see a rural insurgency, where people who have issues of literacy … running a taxation system based on price or value-added tax," he said.

But beyond that, he said it doesn't make sense economically.

READ MORE: Afghan women can go to uni – with caveats 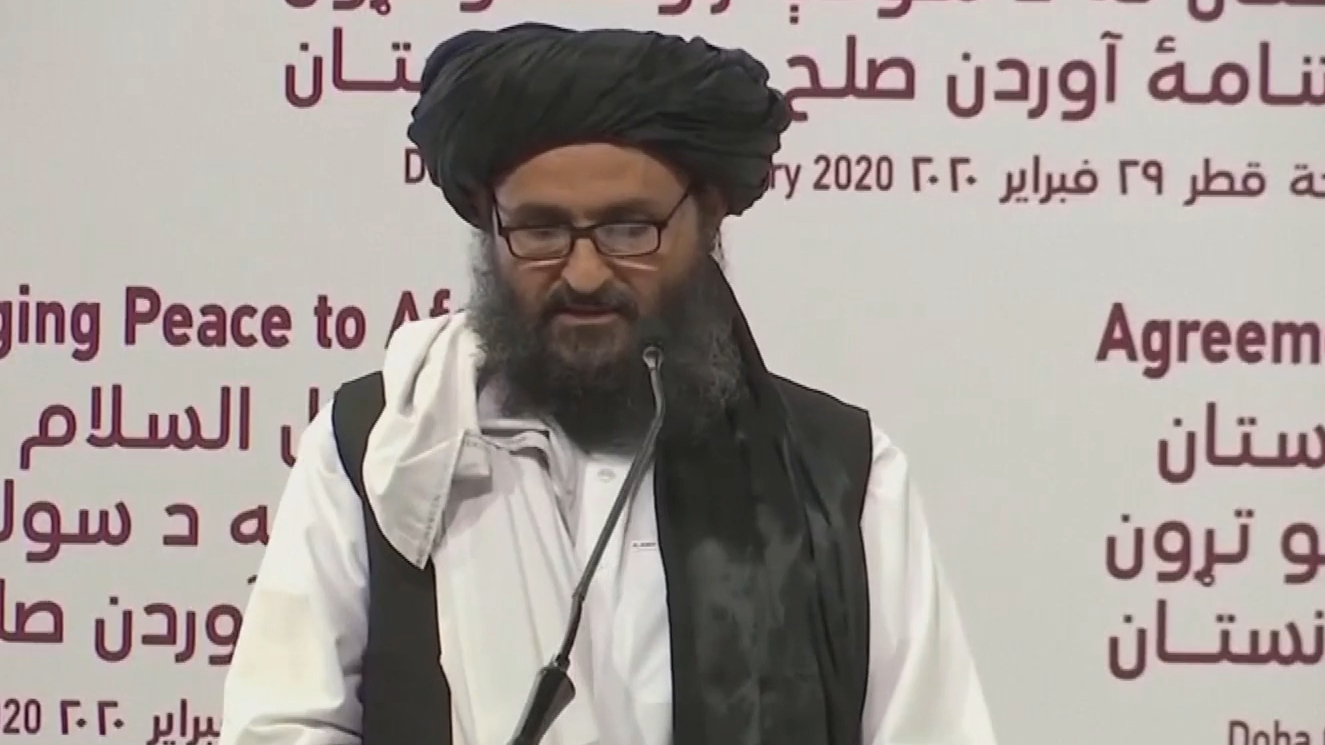 If you start imposing a 10 percent tax on the final price at the point of export – around $1,800 a kilogram for heroin in its base form – considering all other costs, most will have gone out of business, Mansfield explained.

"When people bandy these numbers around and said 10 percent of gross, they never factored in any of the costs of production or whether this was even economically feasible. And it's not.

"The last thing you want to do if you want to earn revenues on commodities is break the value chain, at which point production becomes unprofitable and there is nothing left to tax, Mansfield added.

"So these figures don't make sense administratively or economically."

There are few strands of Afghan society that the drugs economy somehow does not touch.

Last year, Afghan farmers grew poppies across approximately 224,000 hectares (the third highest level ever reported in the country), squeezing out the sticky gum from which heroin and other opiates are made from on a land area 37 percent bigger than in 2019, according to the UN's Office on Drugs and Crime (UNODC).

Poppy cultivation was estimated to provide up to "590,000 full-time equivalent jobs, more than the number of people employed by the Afghan National Defence and Security Forces," in 2017 according to the SIGAR report.

While it remains an important part of the Taliban's funding, Mansfield says that the Taliban are earning far less on drugs than they are on legal goods. 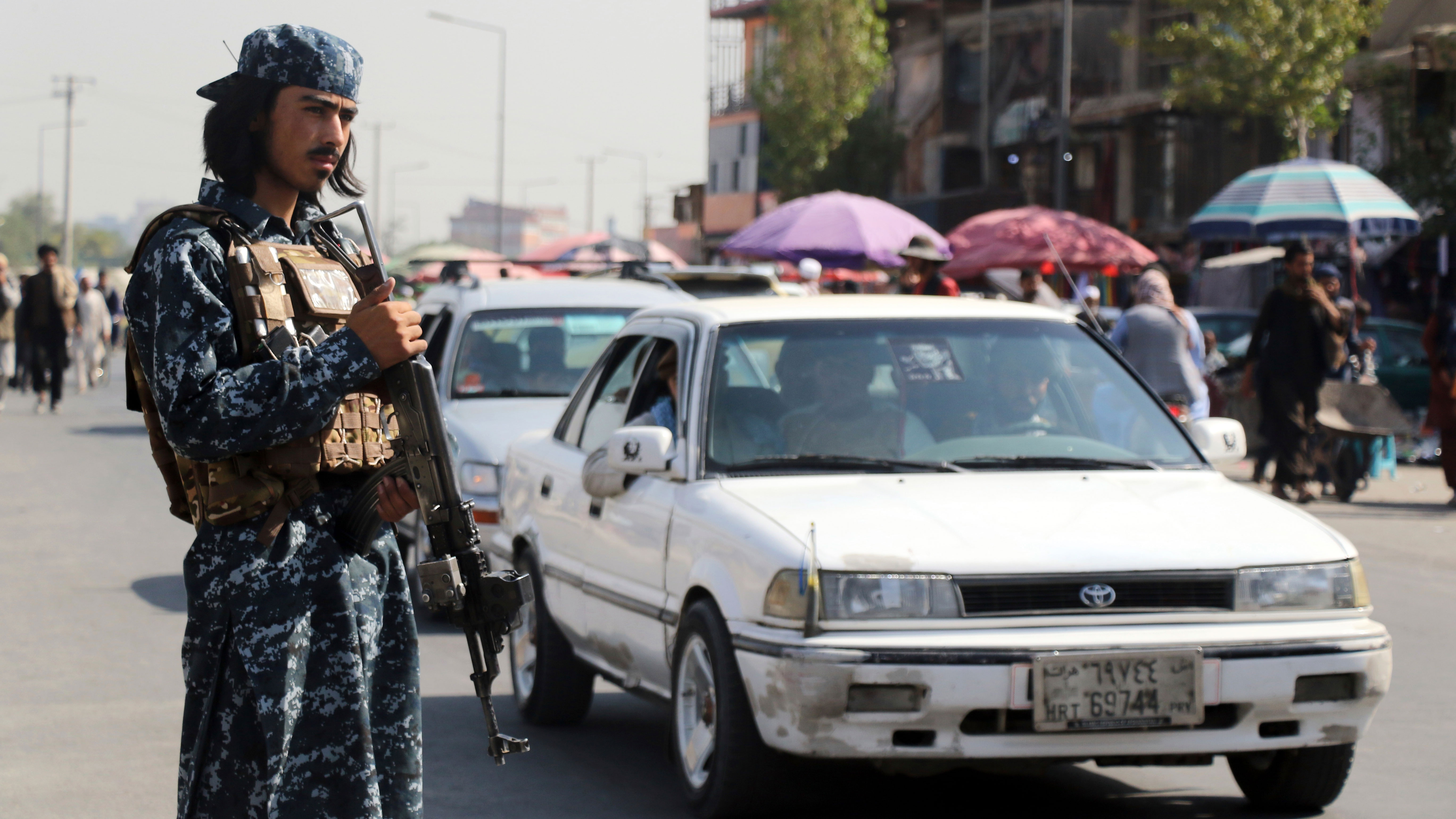 He points to recent research conducted in southern Nimruz province, which borders Iran, that found that the Taliban collected an estimated $5.1 million on the drugs industry compared to $40.9 million levied on fuel and transit goods.

Those poppies, and their production, also hold powerful political and cultural capital.

For generations, Afghan farmers have grown opium and cannabis, an economy that long predates the war.

Like other mountain nations, which often provide good climates for poppy growth, opium has been used medicinally and culturally in Afghanistan, according to Jonathan Goodhand, professor in conflict and development studies at SOAS, University of London.

But multiple invasions of the country have fuelled opium cultivation and production, he said. This began with the Soviet occupation in the 1980s when large flows of financial and military assistance to the regime and the mujahideen – from the Soviet Union and the US, respectively – provided the "start-up capital" for commanders to rev up production, processing and trafficking, according to a 2008 paper by Goodhand.

When the Soviet Union dissolved and the Taliban emerged, taking over Kabul in 1996, opium became a "defacto legal commodity," said Goodhand.

But in 2000, the Taliban changed tack, placing a ban on opium production that reduced production by 90 per cent and virtually eradicated the crop in a year, cutting the world's supply by 65 per cent, according to UN estimates.

The then-Taliban leader, Mullah Mohammed Omar, said growing opium was "un-Islamic," warning in July 2000 that anyone planting poppy seeds would be severely punished.

Goodhand and other experts hypothesise that the move was likely used as a bargaining chip to gain international recognition – and funding.

But the ban backfired spectacularly, running the country into an unemployment crisis and damaging support from poppy farmers, once perhaps sympathetic to the Taliban, who were now in debt.

The ban on poppy production was lifted in 2001, with the collapse of the group.

Since then, poppy production has skyrocketed, with an estimated all-time high recorded in 2017 at roughly 9,900 tons, according to the UNODC, which estimated that its worth was around $1.4 billion at the time, equating to roughly seven per cent of the country's GDP.

It's unlikely that the Taliban will take similar drastic action as in 2000 again, experts say, despite the Taliban's pledge after their takeover.

While the announcement might signal a return to the previous Taliban eradication plan — an attempt perhaps, to curry favour with Western donors – the Taliban are also likely hoping to keep neighbouring Iran and Russia at bay.

The two nations, who have been warming to the group over the last few years, both want to eliminate the massive opium production at their borders.

The Taliban have another external factor to weigh: The rise of synthetic opioids. If Afghanistan's heroin exports plunged as they did back in 2001, it's very likely that synthetic opioids, like fentanyl – largely from China and India – would quickly flood markets in Europe, Africa and Canada in place of Afghan opium and heroin, potentially pushing out Afghan opium for good."

The reality is that they also just can't do it, because the economy's tanking," Felbab-Brown said.

An enforced ban could also create potential for violence, she added.

Felbab-Brown said there are around 100,000 to 150,000 Afghan National Security Forces soldiers and police who are now unemployed, and for whom poppy production might provide some source of economic stability.

"Take that away, then you have 150,000 men who were your enemies and who have nothing to eat," she said.