It is almost the forgotten attack of November 13, 2015: France's national stadium was the sole site outside Paris to come under assault that night from Islamic State extremists.

The three suicide bombers who struck killed one man out of the 130 people who died that night around the city. But for those who survived, the explosions are seared into their bodies and their minds, in the form of projectiles still embedded beneath their skin and unfading trauma in their psyche.

Victims of the November 2015 terror attacks on Paris began testifying on Tuesday, the first day of five weeks of testimony about that night from those at the soccer stadium, the cafés and bars, and the Bataclan concert hall. Fourteen people are on trial in Paris, including the only surviving member of the Islamic State group cell that attacked the city that night in 2015. Another six people are being tried in absentia.

Bilal Mokono, who went to the match with his teenage son, was wheeled into the courtroom, his powerful torso dominating the stand and a mix of fury at the attackers and gratitude for his life on his face. He crossed paths with two of the bombers that night before the first explosion knocked him off his feet. 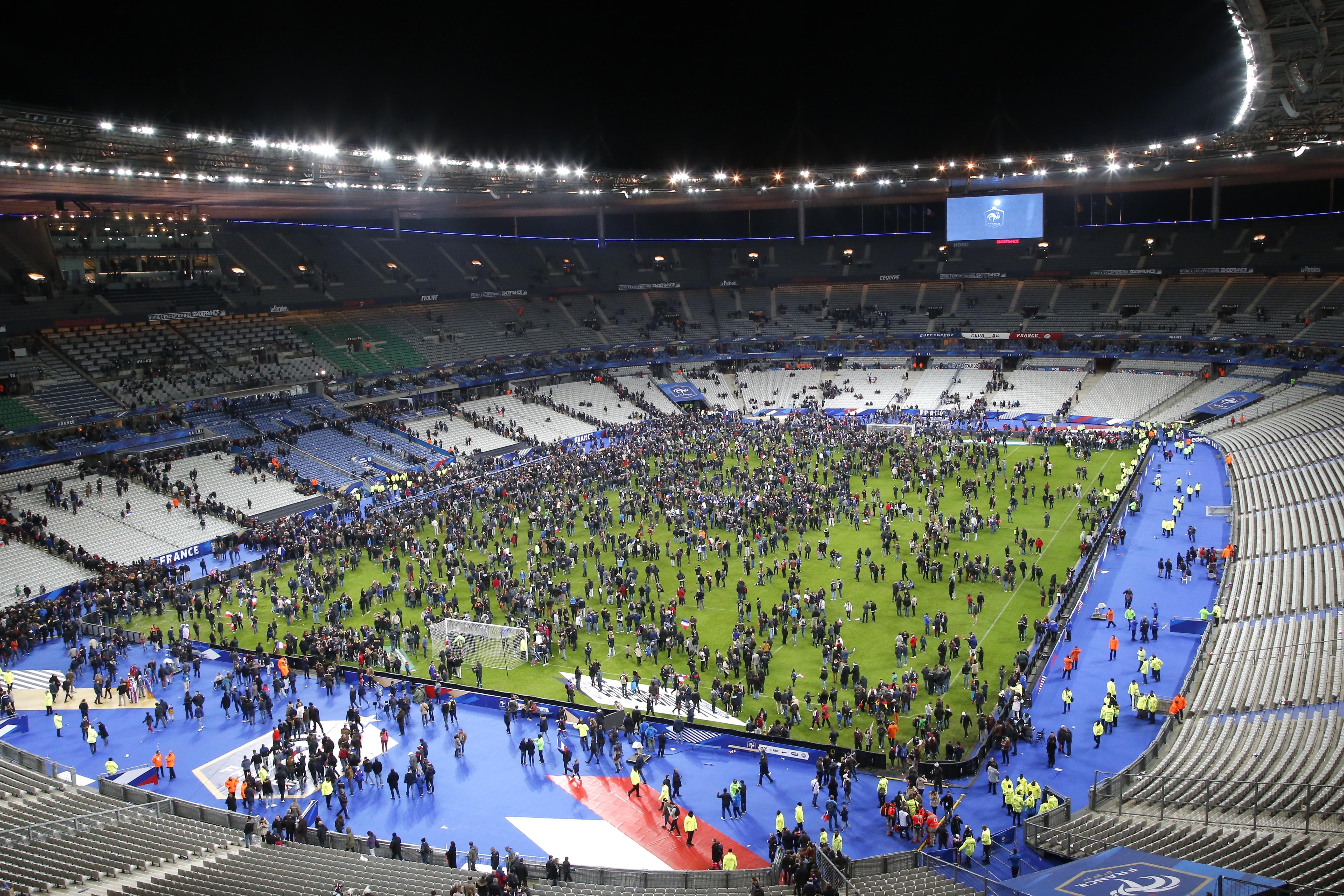 He carried one bleeding woman to the gendarmes, and then started desperately searching for his 13-year-old. Both son and father were convinced the other was dead for endless minutes.

When they spotted each other just outside the security perimeter "I was the one weeping in my son's arms. I was devastated. He had never seen his father cry," Mr Mokono testified. Adrenaline carried him through the night but by the next day the injuries to his shoulder and legs were overwhelming. 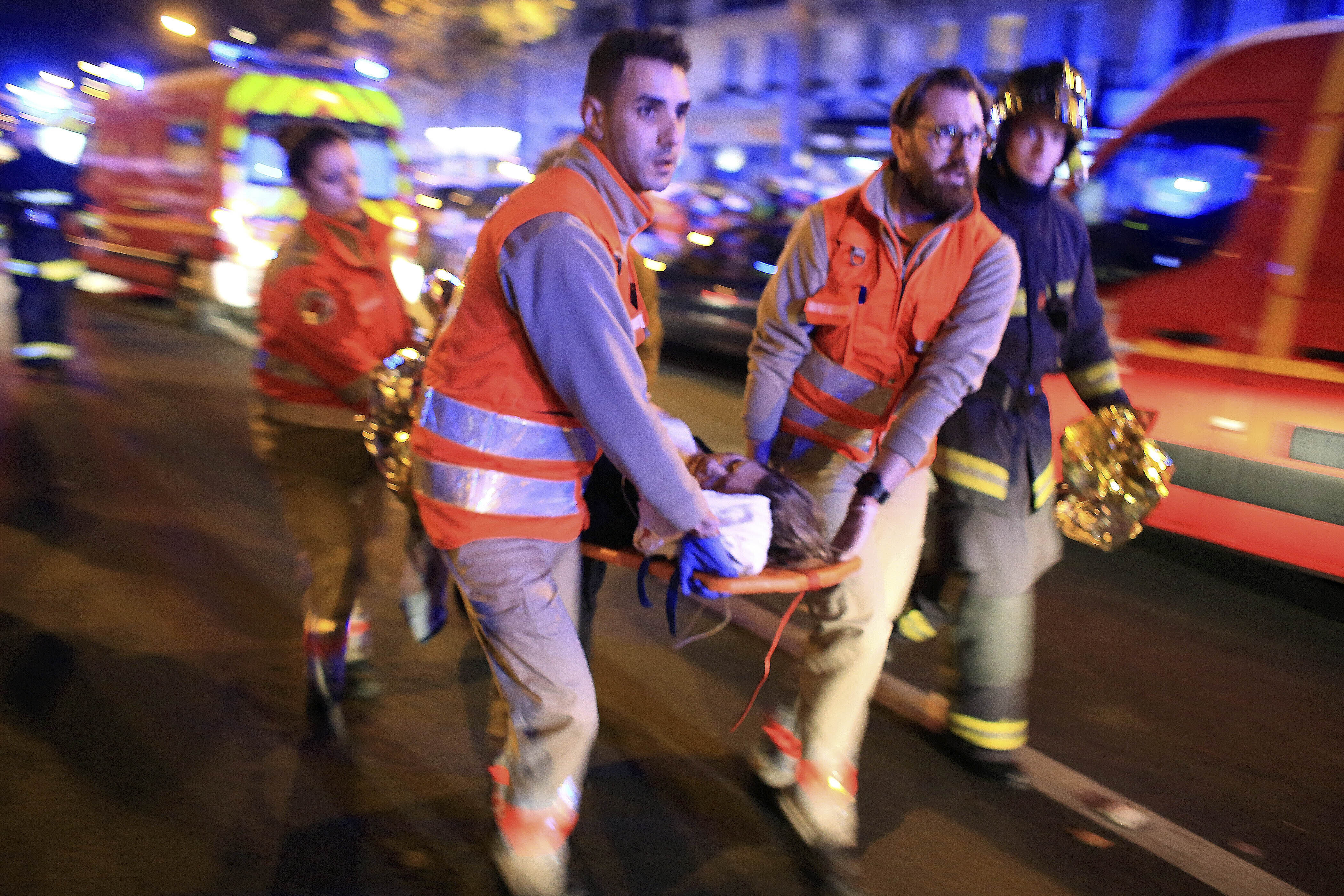 Mr Mokono half-turned to the stand where the defendants sat quietly.

"I am Muslim. I pray five times a day and when I hear people say we're doing this for Allah … The first rule is not to kill," he said. "I have a hard time forgiving. I know I've been taught to forgive, but it is difficult."

Another victim, who has avoided speaking publicly about the attack, said she went from a hard-charging fearless young women into someone she barely recognised. She held up a plastic vial containing shrapnel that was pulled out of her and handed it over to the judges.

"I didn't want my life to be built around this, that this event that so radically changed my life become the essential of who I am," she said. And yet, she added, it has robbed her of her closest relationships, as well as series of jobs that she can no longer hold down as the sounds of the city appear intolerable to her.

"The only answer was to move to the country, but I found in the country that the reality of the attacks wasn't the same as for people in Paris," she said. "They would say 'Oh the stadium, something happened there, right.' People don't know, they don't really care. It happened to someone else."

READ MORE: The cryptocurrencies most at risk of an Evergrande collapse

The only person to die that night was Manuel Dias, a Portuguese retiree who drove busloads of fans to the stadium to earn a little extra money. Mr Dias died nearly instantly in the first bombing – mounted gendarmes came across his body moments later.

His daughter, Sophie, was in Portugal planning her wedding when the attacks started. It took until the following day to learn that her father was among the dead. It is still treated too often as an afterthought, she said.

"I will labour to make sure it is not forgotten, not as the bystander as is sometimes reported, but Manuel Dias, the only victim of the Stade de France."

The gendarmes, who numbered 13 that night, were working crowd control outside the stadium for the France-Germany match and absorbed the shockwaves from those explosions. Many went home that night with flesh and debris embedded in their uniforms. At least two came across Mr Dias' body and said they were forever changed.

The unit's commander, Jonathan, said he fought his superiors for months to get psychological support for the 12 mounted men and women. Under court rules, last names of most police officials are withheld.

"I was alone, facing the unknown and the incomprehension of my direct supervisors," he testified. "We are gendarmes, we are trained for this. When I see the state this put us into, then I can imagine what it must have done to the victims and their families."