The ultimate symbol of wealth, the superyacht has seen a dramatic surge in demand during the pandemic, as the ultra-rich yearned for privacy and social distancing in its most luxurious, exclusive form.

Orders flowed in, adding to a rising global fleet of thousands of superyachts — loosely defined as luxury boats at least 24 metres in length and professionally crewed.

Large superyachts have a disproportionately negative impact on the planet. 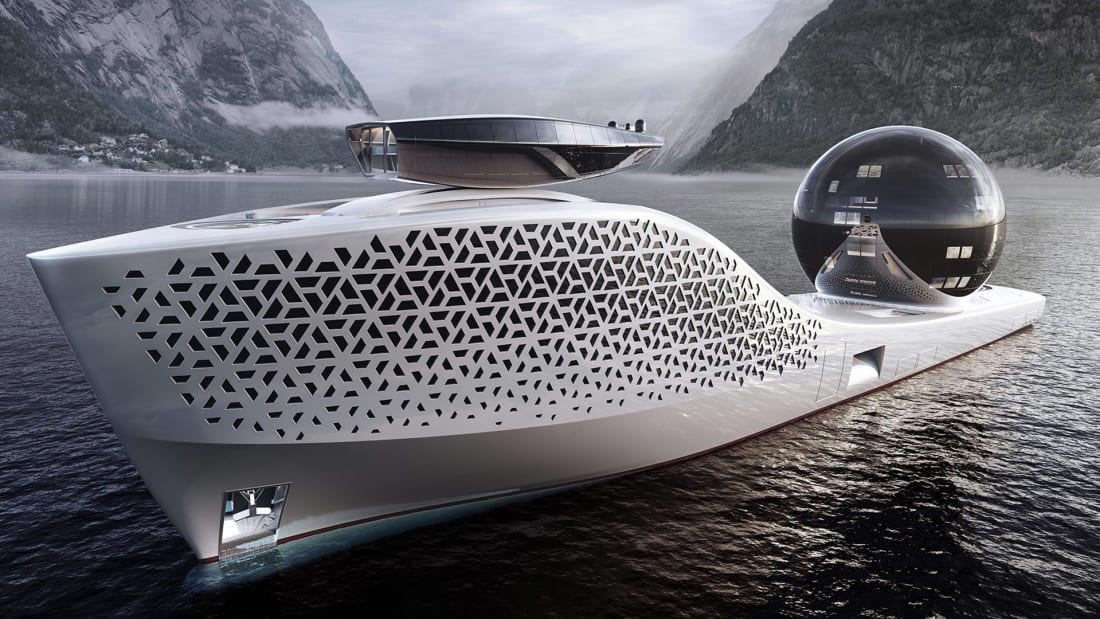 According to one calculation by Indiana University anthropologists, one with a permanent crew, a helicopter pad, submarines and pools emits over 7000 tonnes of CO2 a year.

Multiplied by 300, roughly the number of superyachts worldwide that fit that bill, that equals over two million tons of CO2, more than the individual yearly emissions of about a quarter of the world's countries.

Now, a proposed ship aims to leverage the superyacht's aura of luxury and merge it with scientific research to create an emissions-free megaship that will pit together climate scientists and the wealthy in a daring quest to save the planet. 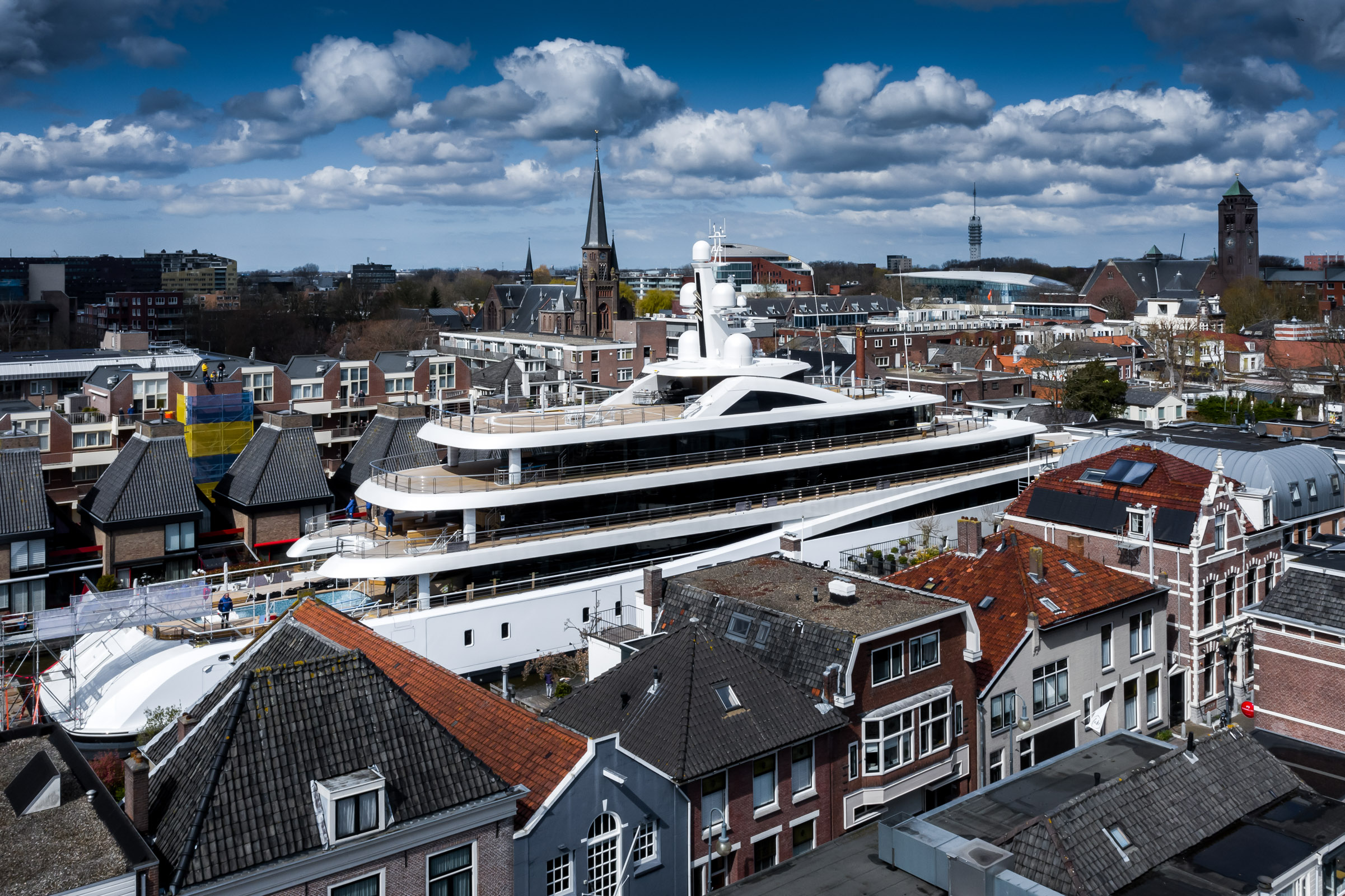 "Why not take the wealthiest people in the world, pull them together with the smartest and brightest scientists, and allow them to experience firsthand what's taking place?" asks Aaron Olivera, the Gibraltar-born, Singapore-based entrepreneur behind the idea.

"Wealthy people can go online and buy anything they want, but they cannot buy a new mental model with which to see the world."

If built, the new vessel, to be christened Earth 300 in reference to its length of 300 metres, would dwarf even the world's largest superyacht; the 180-metre long Azzam, owned by the Abu Dhabi royal family.

The preliminary design is sleek and bold, with a unique 13-storey sphere that will house two dozen scientific laboratories. They will gather data from the ship's travels to hopefully come up with solutions to help mitigate the climate crisis.

READ MORE: Packer's $282 million superyacht up for sale – See inside 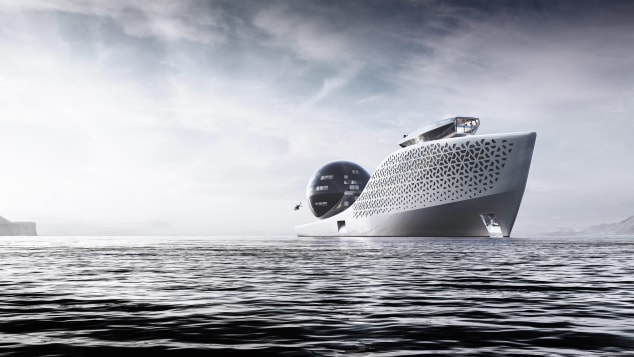 Feeding into an open-source platform to allow the global community to participate, they will be supported by a quantum computer, a new type of computer that employs the properties of quantum mechanics to achieve incredible speed and power.

Like much of the technology that Mr Olivera hopes to incorporate into Earth 300, the quantum computer is not yet commercially available, but is currently the subject of experimental studies by the likes of Google and IBM.

Most of the ship's capacity of 425 people will be taken up by two main groups: 165 crew and 160 scientists.

There will also be 20 students and a pool of 20 resident experts — economists, engineers, explorers, artists, activists and politicians — forming a "multidisciplinary melting pot," says Mr Olivera.

The only paying guests will be the wealthy tourists occupying the ship's 20 VIP suites, at a projected cost of just over US$1.38 million per person, to fund the science.

But forget about 'exclusivity'.

This ship will be a floating computer which will allow people from all around the world to participate in the journey. That means that these wealthy individuals who are coming on board will have to share the experience with the world, not just among themselves," says Mr Olivera.

Mr Olivera says he envisages Earth 300 to become an iconic object of its generation, and draws comparisons to the Olympic torch and the Eiffel tower.

"The reason we're building a ship is that climate change is a global problem, so it needs a global vehicle," he says, adding that the oceans are the beating heart of the planet, because they absorb most of the carbon. 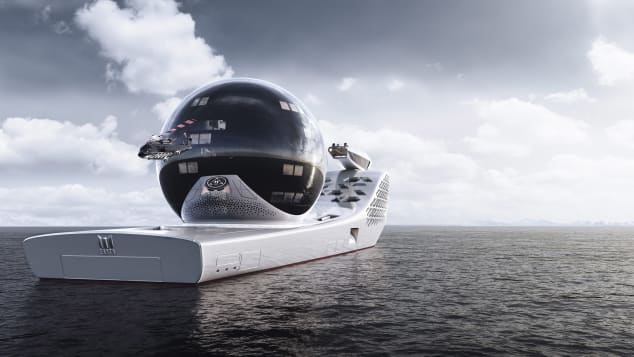 But he also wanted people to come together in a confined environment, experiencing some sense of adventure and even danger.

"Bonds that are made on a ship are very different from the ones that are made in a static building. When's the last time you had an adventure inside a building?"Mr Olivera, who has a background in the world of luxury and hospitality in Singapore, says, explaining the inspiration for Earth 300 came when he was diving in the Maldives and saw its dying corals.

He envisages the ship as a way of combining two colliding worlds — luxury and environmentalism.

"We want to create a new brand of enlightened explorer, to turn the tide on the way people see the wealthy and show that they can, and should, be leading the way," he says.

Funded by fishing and oil drilling magnate Kjell Inge Røkke, it was supposed to set off in 2022, but the project has been delayed by three to five years due to problems with construction of the ship.

At US$967 million, Earth 300's projected cost is double that of REV Ocean, and Mr Olivera is looking at shipyards in Germany and South Korea for the construction.

He says the ship's preliminary design and naval engineering have been completed, and hopes to be ready for a maiden voyage this decade.

"I think 2025 is possible for us. It's just a question of the chips falling into place in the next six months or so, once we have the funding package in place," he says, adding that funding will come from private investors as well as "traditional banking instruments."

Initially, the ship will use green synthetic fuels, but to satisfy the requirement of being completely emission-free, Mr Olivera plans to eventually retrofit a molten-salt reactor, a modern type of nuclear reactor.

It would allow the ship to remain at sea indefinitely, with complete energy autonomy. Just like the quantum computer, however, this technology doesn't exist yet, but it's being developed by UK firm Core Power in collaboration with TerraPower, a nuclear engineering company chaired by Bill Gates.

It's one of a dozen entities that have announced ties with the project, including IBM, naval architecture studio Iddes Yachts and ship classification firm RINA.

When asked which famous people he'd like to have on board, Mr Olivera responds with a list of names he calls "the usual suspects:" Elon Musk, Michelle Obama, Greta Thunberg, "No Logo" author Naomi Klein and Patagonia clothing brand founder Yvon Chouinard.

His plan, however, is to pair these VIPs with a set of non-famous "Very Inspiring People" from all walks of life, all ages and all cultures, who would not be asked to pay for their ticket, but would still get to stay in one of the luxury suites."

That's the way we are democratising the experience," he says, "by allowing people who could never in a million years afford the ticket to come on board."