In July of 2020 the Michigan woman came across a website, Rent-A-Hitman, that promised to "handle your delicate situation" privately and in a timely manner.

The site boasts having almost 18,000 field operatives who can do a job anywhere in the United States. It features testimonials from satisfied clients, including a man who wrote that RentAHitman "handled my disgruntled employee issue promptly while I was out of town on vacation". 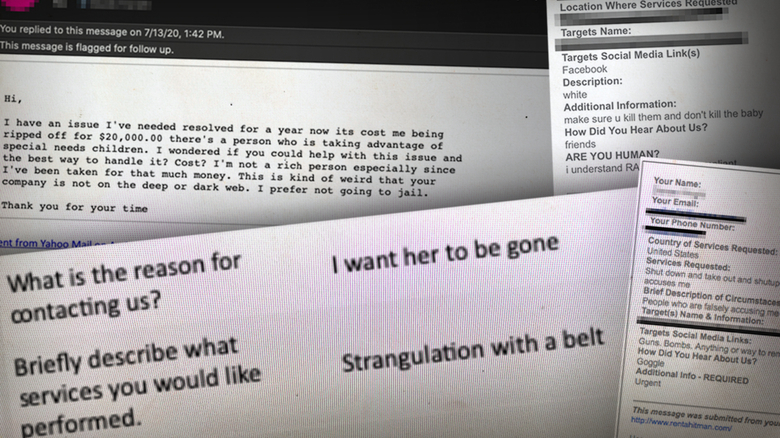 So Ms Wein filled out a form on the site, seeking consultation for her issue.

"This is kind of weird that your company is not on the deep or dark web," she wrote in a message to a man she believed was the site's chief consultant, Guido Fanelli.

CNN obtained a copy of the message.

"I prefer not going to jail," she added. "Thanks for your time."

That didn't stop Ms Wein from offering later to pay $5,000 to have her husband killed.

But there was a problem.

Guido Fanelli is actually Bob Innes, a California man who runs the website. Rent-A-Hitman's "operatives" have never actually killed anybody. Instead, the site exists to dupe people who are looking for hired killers.

And Ms Wein is now headed to prison — one of several Rent-A-Hitman "clients" who've been found guilty of using the site to solicit a murder.

The site's owner turns murderous 'clients' over to police 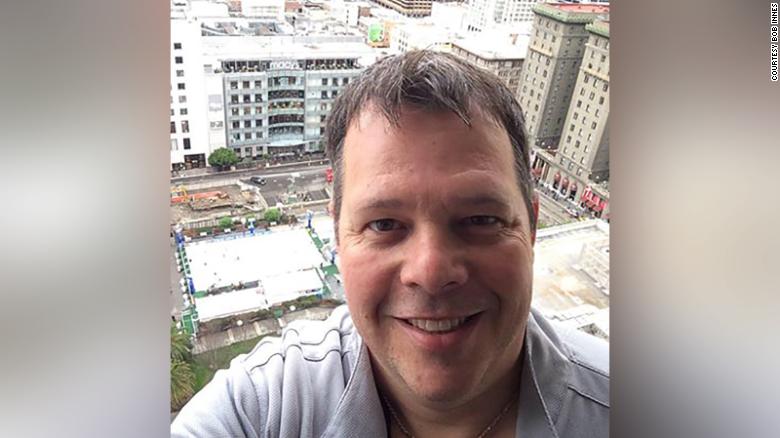 What started as a website for an internet security business has turned, by accident, into online bait for people looking to get their enemies killed. Their service requests go to Innes, who hands serious inquiries over to law enforcement.

Mr Innes, who lives in Fairfield, California, says he's left red flags all over his site hinting that it's a trap. For starters, the website openly suggests that it offers illegal services. Its phony testimonials include one from a woman who's "ready to mingle" after she caught her husband cheating with a babysitter.

Its 18,000 "field operatives" are the estimated number of law enforcement agencies nationwide. At the bottom of the site, a link to check if your credit card has been stolen takes users to the FBI's Internet Crime Complaint Centre.

And the site promises confidentiality under the "Hitman Information Privacy & Protection Act of 1964," a tongue-in-cheek nod to HIPAA, the real-life Health Insurance Portability and Accountability Act which passed in 1996 and protects patients' medical information.

But some people still fall for it, filling out online forms with their real name, contact information and details about who they want "handled".

Mr Innes says more than 400 people have filled service request forms on the site since it launched, including some who have expressed interest in becoming hit men and pranksters trying to play jokes on friends. Of those, roughly 10 per cent turned into legitimate cases where police became involved, he says.

"I thought nobody can be that stupid, and boy have I been proven wrong," says Mr Innes, 54. "These people … whoever they are, they see HIPAA, they think privacy. So they feel compelled to leave their real information — names, address, where the intended target is…"

If a person fills out a form on his site and explicitly seeks to have someone killed, Mr Innes will wait 24 hours before contacting police.

"It's kind of like a cooling-off period, to come back to your senses. I want to give people the opportunity to walk away," he says.

"After a day, I ask them two questions. Do you still require our services? Do you want to be connected with a field operative?"

If they respond yes to both, Mr Innes connects them with a law enforcement agency in their area, which takes over communications with the suspect. Mr Innes never discusses a fee — he leaves that to the "field operatives".

READ MORE: Women who met Maxwell as teens now accuse her as adults

"I just play matchmaker with the police," he says.

"I'd rather be a state witness than a state conspirator."

When Ms Wein, the Michigan woman, confirmed after 24 hours that she still wanted to hire a killer, Mr Innes turned her information over to Michigan State Police. They sent a state trooper, posing in plainclothes as a hit man, to meet her in a parking lot in South Rockwood, south of Detroit. 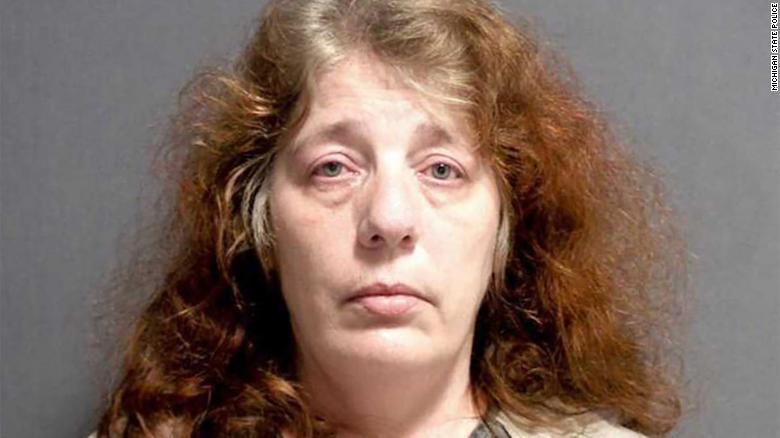 Police said Ms Wein offered to pay the trooper $5,000 to kill her ex-husband and provided his home address, place of work and his schedule. State police told CNN she gave the trooper a $200 down payment for travel expenses because her ex-husband lived in another state.

Ms Wein was arrested and pleaded guilty last month to charges of solicitation for murder and use of a computer to commit a crime. She faces up to nine years in prison at her sentencing, scheduled for January, says Sgt. Michael Peterson of Michigan State Police, who led the case.

"What stood out the most about this case was the foolishness of the suspect … attempting to hire a hit man from a website," Mr Peterson says.

Mr Innes says he never intended to trap would-be killers when he launched the website in 2005. He was trying to start an internet security business, focusing on web traffic and risk analysis for small networks.

"'Rent' as in hire us, 'hit man' as in website traffic and analytics," he says.

His internet security business never took off, so he tried to sell the domain name. There wasn't much interest from buyers, so he forgot about it and let it sit dormant for years.

Then, one day in 2008, he checked the site's inbox and was stunned.

"There were emails about 'how much for a hit?' 'are you hiring a hit man?'," Mr Innes says. "I didn't know how to respond, frankly, so I shut the email inbox and walked away for a couple of years."

"I get an email from a woman saying she needed three people murdered," Mr Innes says. "A few hours later, she sent a second email with the names and addresses of the people she wanted killed." 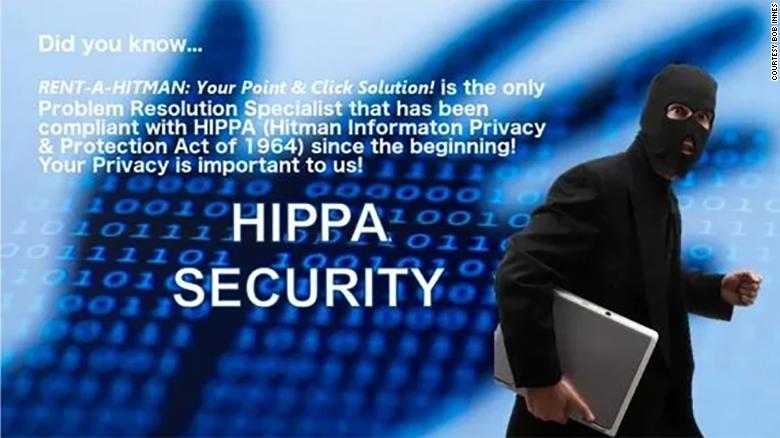 The woman told Innes she was a British citizen living in Ontario, Canada, and that the three people she wanted killed had stolen her father's inheritance.

Innes says he looked up some of the addresses she provided, and her information seemed to check out.

"She wanted to get even. She was gonna stop at nothing," he says. "I reached out to a friend who was a sergeant and said, 'I think this lady is serious, can we request a welfare check?" The friend notified Canadian authorities."

The woman was arrested and served a few months behind bars for soliciting to commit murder before she was deported to Britain, Innes says.

So he turned the site into what he calls an "over-the-top parody," complete with the fake HIPAA statement and offers of special discount packages for groups and seniors.

"Rent-A-Hitman is safe, secure, and available right here on the World Wide Web," says the site, which promises to be "your point & click solution."

Another man tried to use the website to kidnap a child

Mr Innes' website also led to the conviction of a Virginia man who tried to hire someone to kill his ex-girlfriend and her parents in 2018.

The man, Devon Fauber, is mentally disabled and told an officer posing as a hit man that he wanted to kill the three relatives so he could take care of his ex-girlfriend's three-year-old daughter, according to a report in The News Leader of Staunton, Virginia. 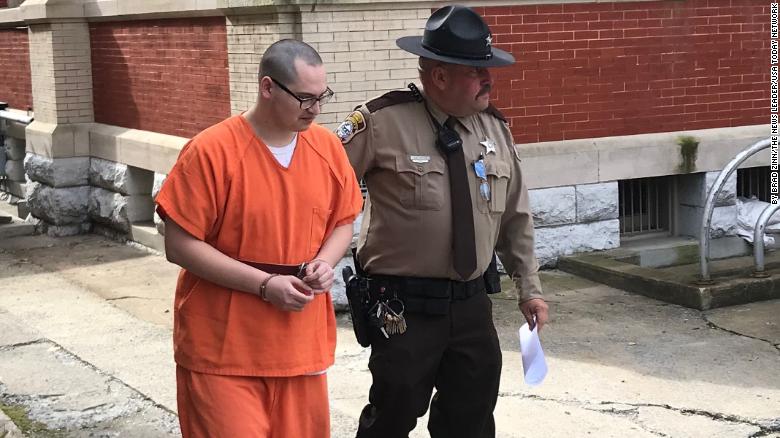 "Make sure you kill them and don't kill the baby," Mr Fauber wrote in his online request for a hit man, Mr Innes says. Mr Fauber also asked to have the child kidnapped, along with her birth certificate, from her home in Staunton, according to Innes.

Court records show that Mr Fauber was sentenced in 2019 to 10 years in prison for solicitation to commit first-degree murder.

Despite the publicity such cases bring to his website, Innes says he still gets online requests from people who want to hire a hit man. Some reach out from overseas, asking if he can arrange a hit in a specific country.

He never advertises the website, so he thinks people are probably finding it through online searches. Mr Innes says his website's analytics show it has been viewed in 160 countries.

Mr Innes says he's now trying to educate people about online dangers and calling for tougher laws for people convicted of using the internet to carry out violent crimes.

"This is a work in progress, but if there are any lawmakers, internet safety groups or anyone else that may want to assist in this project, that would be greatly appreciated," he says.