Over 100 people are feared dead after a series of tornadoes ripped through several states in the US Midwest and South and transformed homes and businesses into piles of rubble late Friday into Saturday.

In Kentucky alone, the death toll is at least 80 people and is going to exceed 100, Governor Andy Beshear said today – making it the deadliest tornado event in the state's history.

"I know people can see the visuals, but that goes on for 12 blocks or more in some of these places. And it's going to take us time," he said. 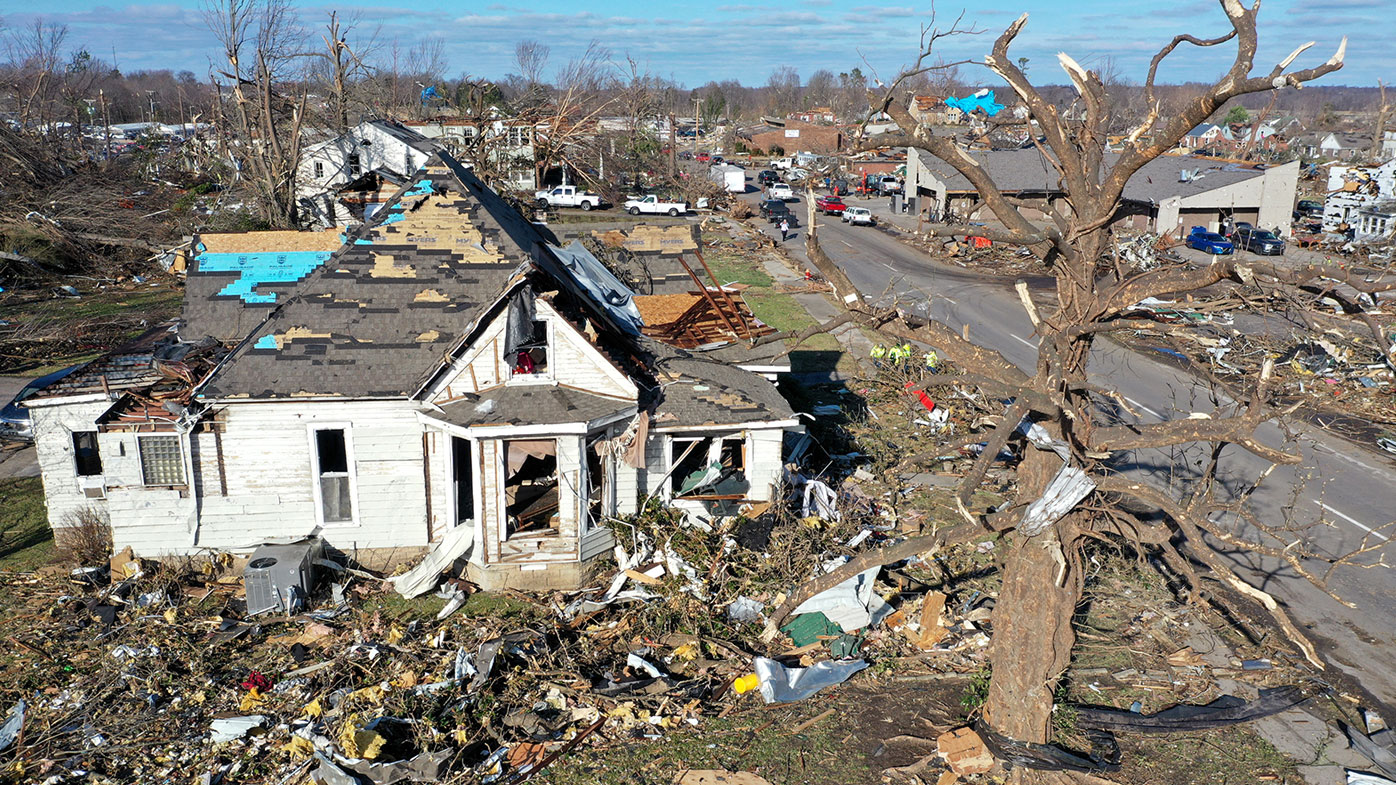 LIVE UPDATES: Treasurer warns premiers not to 'get spooked' by Omicron

"You think you would go door-to-door to check on people and see if they're okay. There are no doors.

"The question is, is somebody in the rubble of thousands upon thousands of structures? I mean, it is devastating," he added.

Speaking on CBS' "Face the Nation," Mr Beshear confirmed a three-year-old in Graves County and a five-year-old in Muhlenberg County were among the dead.

Kentucky has not released an official death toll.

Across the region, destroyed buildings, downed power lines and wrecked vehicles lined the streets in hard-hit areas, making it tougher for rescuers trying to reach communities left with no working phone or power lines.

READ MORE: Before and after photos show devastation of US tornado outbreak

More than 50,000 customers in Kentucky were without power as of Sunday afternoon, according to PowerOutage.US.

Tornadoes or strong winds collapsed an occupied candle factory in Kentucky, an Amazon warehouse in western Illinois, and a nursing home in Arkansas, killing people in each community and leaving responders scrambling to rescue others.

More than 30 tornadoes were reported in six states.

Meteorologists said a stretch of more than 400 kilometres from Arkansas to Kentucky might have been hit by one violent, long-track twister.

According Federal Emergency Management Agency Administrator Deanne Criswell, the severe storms are the "new normal" in an era of climate change.

"The effects we are seeing of climate change are the crisis of our generation," Ms Criswell said.

"We're taking a lot of efforts at FEMA to work with communities to help reduce the impacts that we're seeing from these severe weather events and help to develop systemwide projects that can help protect communities."

Despite her assertion, scientific research on climate change's influence on tornadoes is not as robust as for other types of extreme weather like droughts, floods and even hurricanes.

The short and small scale of tornadoes, along with an extremely spotty and unreliable historical record for them, makes assessing their relationships to long-term, human-caused climate change very difficult. 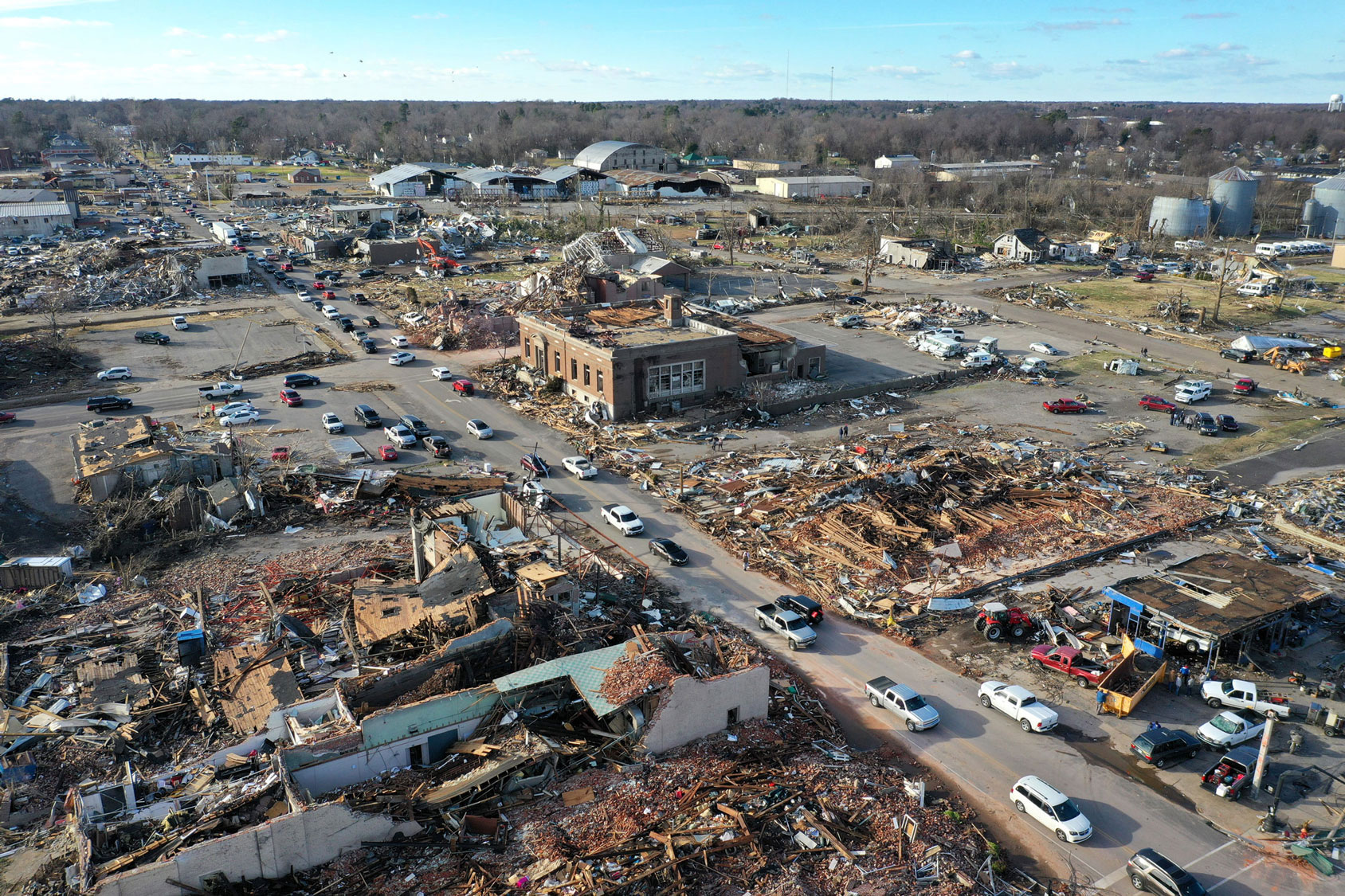 In Mayfield, Kentucky, a city of around 10,000 people, a candle factory collapsed into a massive pile of debris, and rescuers used their hands and machines to dig through the destruction.

"There's at least 15 feet (4.5 metres) of metal with cars on top of it, barrels of corrosive chemicals that are there. It will be a miracle if anybody else is found alive in it," Mr Beshear said.

Troy Propes, CEO of the company that owns the candle factory, said he believed workers in the factory followed the proper tornado safety protocols.

"Our factory was built as a manufacturing facility and the concrete walls and the steel frame and the structure," he said.

"You would have thought it would have been one of the safest places but ironically, as you can see with this devastation, there wasn't anything safe about this storm."

"I think hindsight is always an incredible lens to look through but I think everybody made the best decisions and the right decisions with the information that they had," he added.

Some family members are still searching for relatives who worked at the candle factory.

Paige Tingle, who was looking for her mother-in-law, Jill Monroe, said time is of the essence.

The last time the family spoke with her, she was in the bathroom in the safe shelter area," Ms Tingle said on Saturday.

"She (Monroe) has lung problems, she has heart problems," Tingle said. "We've got to get her."

The family checked local hospitals but they haven't found her.

Calls to her phone have gone unanswered.

Ivy Williams was at the Mayfield site on Saturday looking for his wife of 30-plus years, Janine Williams, who was at the factory.

He last heard from her before the tornado hit, and was shocked to find the building completely levelled when he arrived at the scene.

First responders have pulled people out of the rubble — some of them alive, storm chaser Michael Gordon said from the scene.

"It's kind of hard to talk about. … They're digging in that rubble by hand right now," Mr Gordon said. 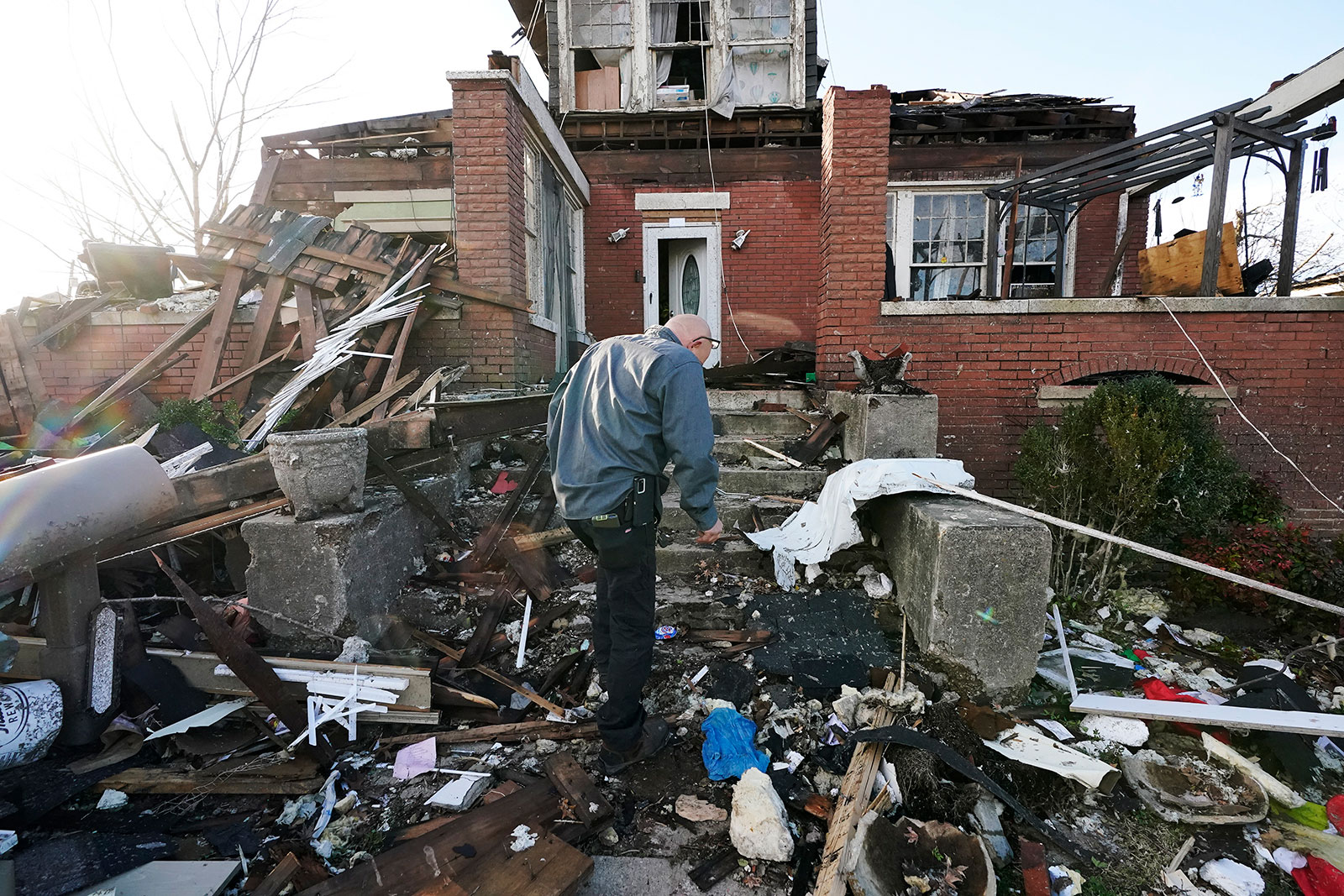 Mr Beshear visited some of the affected areas to assess the damage.

In his father's hometown of Dawson Springs, which has a population of about 2700, some remain unaccounted for.

"One block from my grandparent's house, there's no house standing and we don't know where all those people are," Mr Beshear said.

The state has deployed the National Guard to conduct searches, clear debris from roadways, and take generators to help power shelters and hospitals.

The governor urged people in affected communities that still have power to stay off the roads.

"Let our first responders get to everybody. Don't go to these areas to see it. We need to make sure those who do this work can do it at the fastest possible speed," he said.

Kentucky State Police Lt. Dean Patterson said the destruction is unlike anything he's seen before.

And the rescue and recovery effort will come with challenges.

"It's a very thorough and slow process, because you have to be careful when you are dealing with so much debris, and so many unknowns. One wrong move and you could actually cause more damage, so it's a slow, methodical process."

A hospital in Paducah, Kentucky, around 43 kilometres north of Mayfield, has been treating tornado victims.

"Warm air in the cold season, middle of the night – this sickens me to see what has happened," he said.

"Look at the pictures on your screens. Homes, totally impaled, two-by-fours through cars, eighteen-wheelers thrown nine metres moved in the northwesterly direction – that takes a lot of force."