A leftist millennial who rose to prominence during anti-government protests has been elected Chile's next president after a bruising campaign against a free-market firebrand likened to Donald Trump.

With 56 per cent of the votes, Gabriel Boric on Sunday (Monday AEDT) handily defeated by more than 10 points lawmaker José Antonio Kast.

Mr Kast had tried unsuccessfully to scare voters that his inexperienced opponent would become a puppet of his allies in Chile's Communist Party and upend the country's vaunted record as Latin America's most stable, advanced economy. 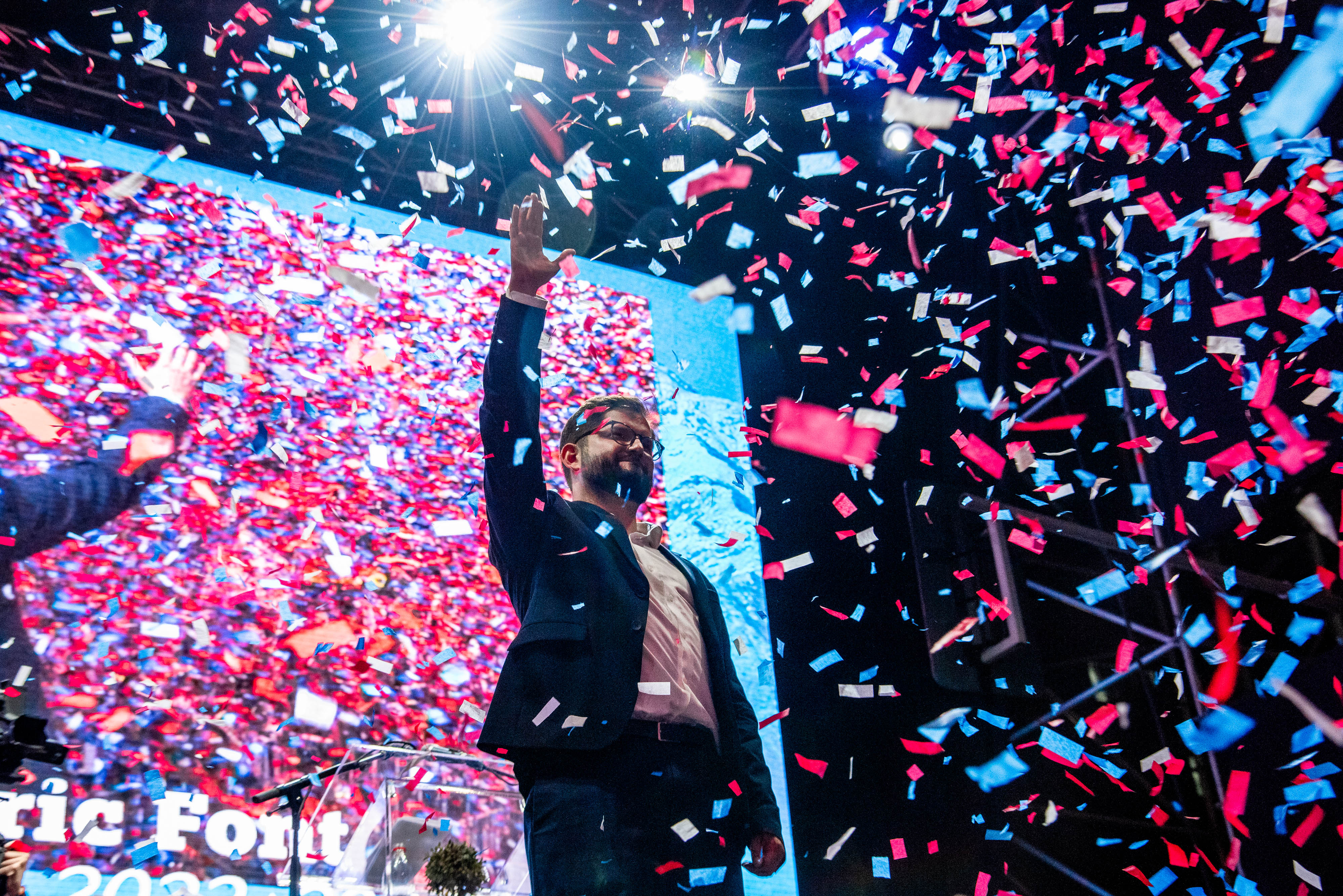 In a model of democratic civility that broke from the polarising rhetoric of the campaign, Mr Kast immediately conceded defeat, tweeting a photo of himself on the phone congratulating his opponent on his "grand triumph".

He later travelled personally to Mr Boric's campaign headquarters to meet with his rival.

Amid a crush of supporters, Mr Boric vaulted atop a metal barricade to reach the stage where he initiated in the indigenous Mapuche language a rousing victory speech to thousands of mostly young supporters.

The bearded, bespectacled president-elect highlighted the progressive positions that launched his improbable campaign, including a promise to fight climate change by blocking a proposed mining project in what is the world's largest copper-producing nation. 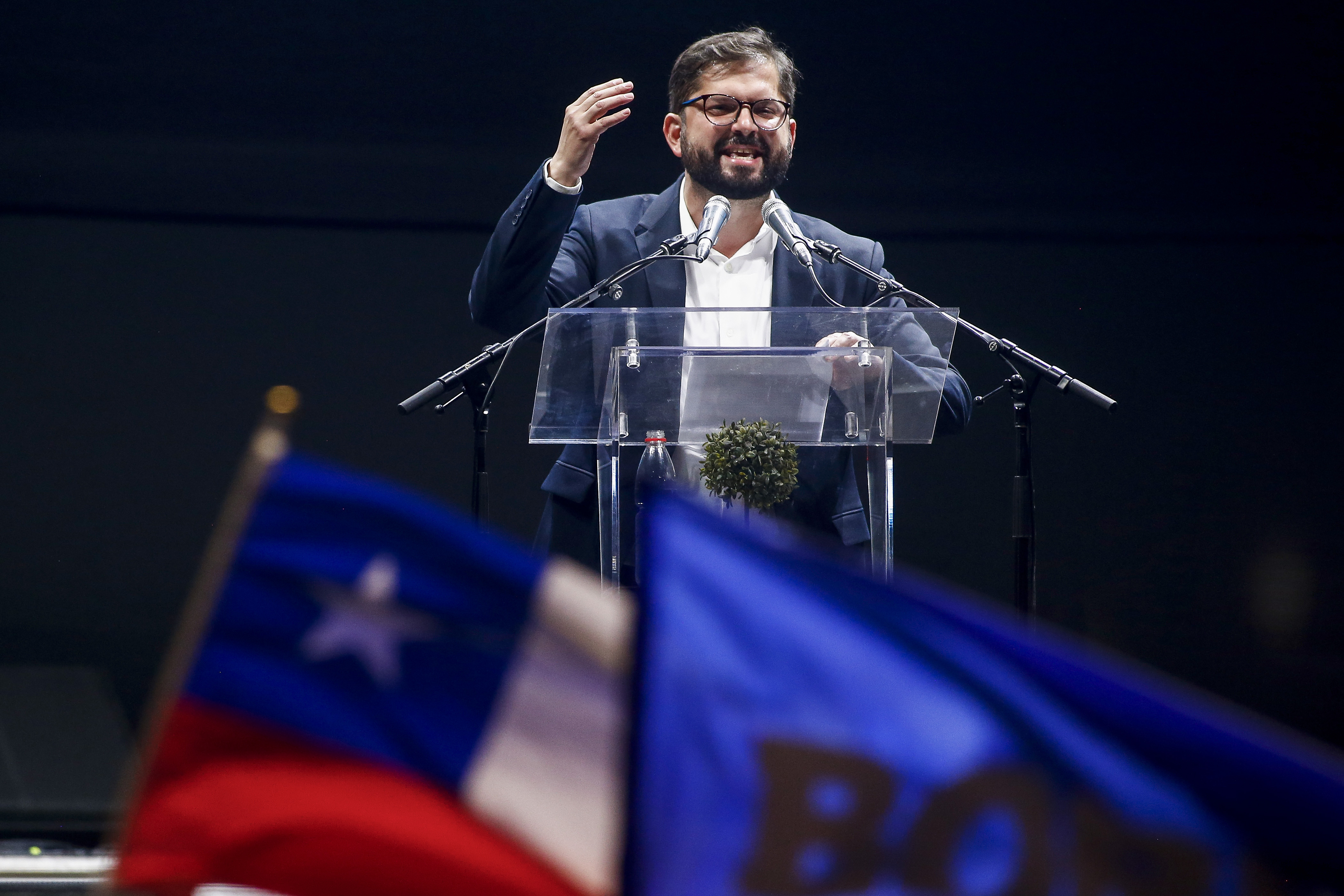 He also promised to end Chile's private pension system — the hallmark of the neoliberal economic model imposed by the dictatorship of General Augusto Pinochet.

"We are a generation that emerged in public life demanding our rights be respected as rights and not treated like consumer goods or a business," Mr Boric said.

He also gave an extended shout out to Chilean women, a key voting bloc who feared that a Kast victory would roll back years of steady gains, promising they would be "protagonists" in a government that will seek to "leave behind once and for all the patriarchal inheritance of our society".

In Santiago's subway, where a fare hike in 2019 triggered a wave of nationwide protests that exposed the shortcomings of Chile's free market model, young supporters of Mr Boric, some of them waving flags emblazoned with the candidate's name, jumped and shouted in unison as they headed downtown to join thousands who gathered for the president-elect's victory speech.

READ MORE: Melbourne mum 'burst into tears' when donor paid off her lay-bys 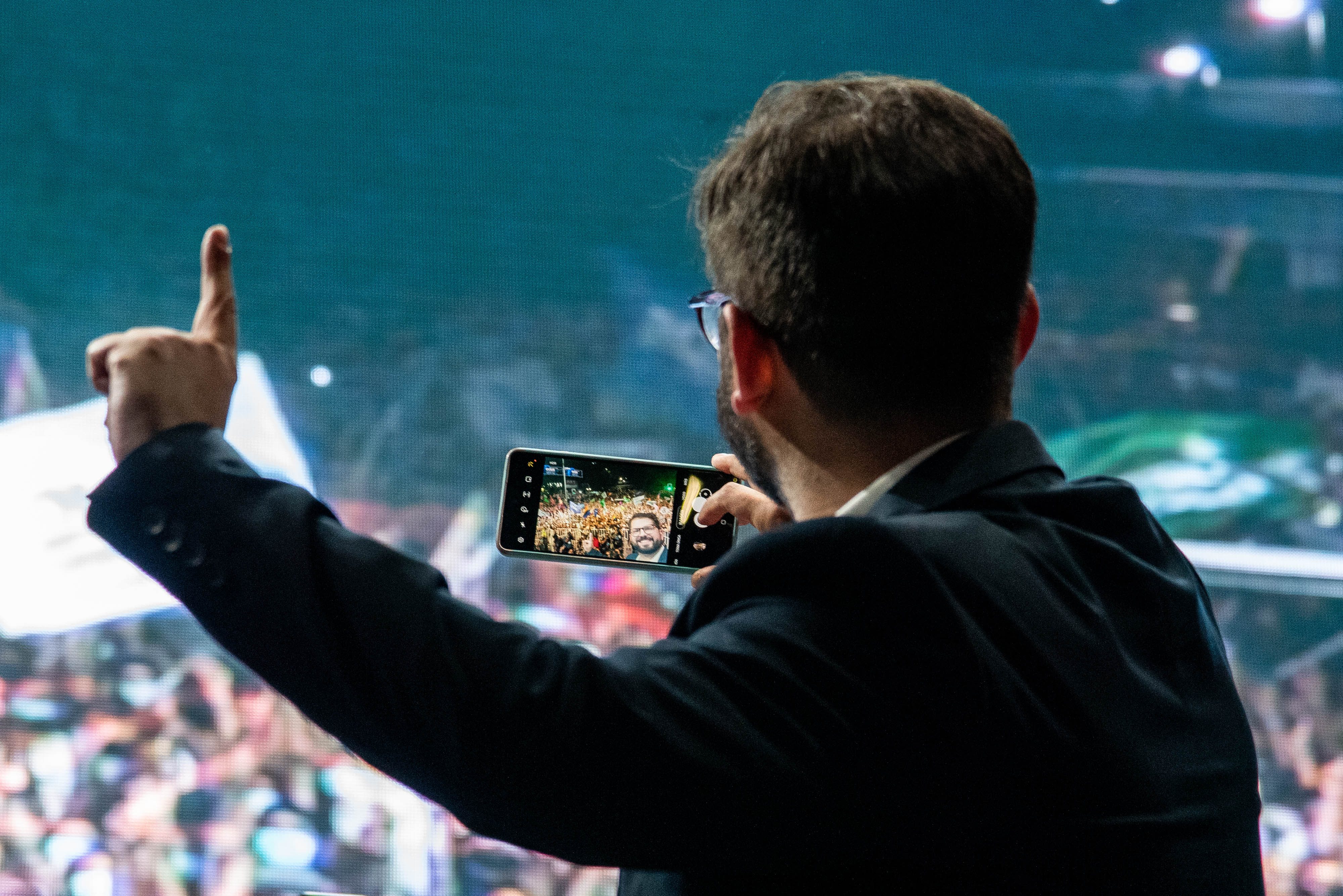 "This is a historic day," said Boris Soto, a teacher.

"We've defeated not only fascism, and the right wing, but also fear."

At 35, Mr Boric will become Chile's youngest modern president when he takes office in March and only the second millennial to lead in Latin America, after El Salvador's Nayib Bukele.

Only one other head of state, Giacomo Simoncini of the city-state San Marino in Europe, is younger.

Mr Boric's government is likely to be closely watched throughout Latin America, where Chile has long been a harbinger of regional trends.

It was the first country in Latin America to break with the US dominance during the Cold War and pursue socialism with the election of Salvador Allende in 1970.

It then reversed course a few years later when General Pinochet's coup ushered in a period of right-wing military rule that quickly launched a free market experiment throughout the region.

Mr Boric's ambitious goal is to introduce a European-style social democracy that would expand economic and political rights to attack nagging inequality without veering toward the authoritarianism embraced by so much of the left in Latin America, from Cuba to Venezuela. 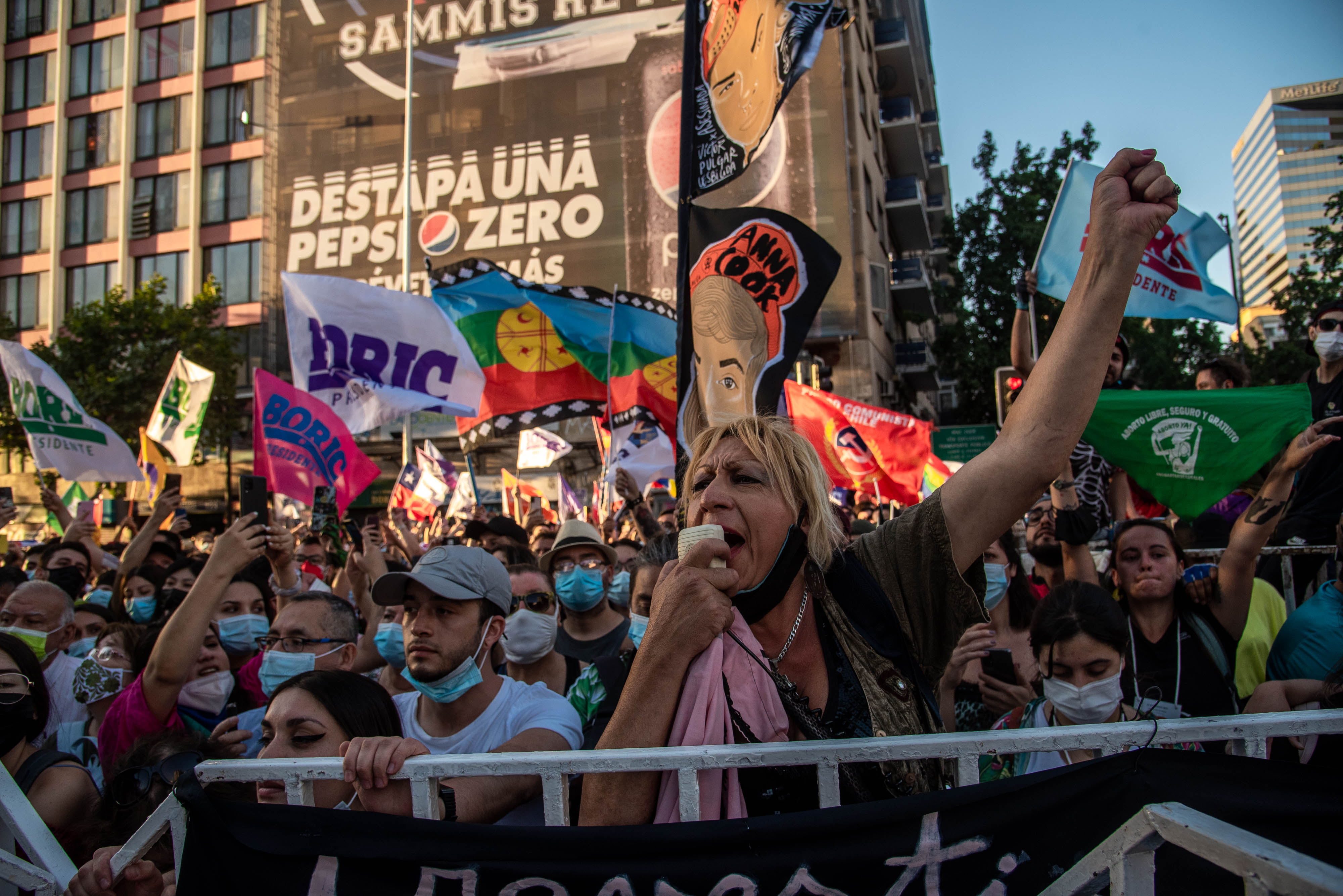 It's a task made more challenging by deepening ideological divisions unleashed by the coronavirus pandemic, which sped up the reversal of a decade of economic gains.

Mr Kast, who has a history of defending Chile's past military dictatorship, finished ahead of Mr Boric by two points in the first round of voting last month but failed to secure a majority of votes.

That set up a head-to-head runoff against Boric.

Mr Boric was able to reverse the difference by a larger margin than pre-election opinion polls forecast by expanding beyond his base in the capital, Santiago, and attracting voters in rural areas who don't side with political extremes.

For example, in the northern region of Antofagasta, where he finished third in the first round of voting, he trounced Mr Kast by almost 20 points.

An additional 1.2 million Chileans cast ballots Sunday compared to the first round, raising turnout to nearly 56 per cent, the highest since voting stopped being mandatory in 2012.

"It's impossible not to be impressed by the historic turnout, the willingness of Kast to concede and congratulate his opponent even before final results were in, and the generous words of President Pinera," said Cynthia Arnson, head of the Latin America program at the Wilson Centre in Washington.

"Chilean democracy won today, for sure."

READ MORE: 'Always in our hearts': Tributes for sixth child killed in Tasmania 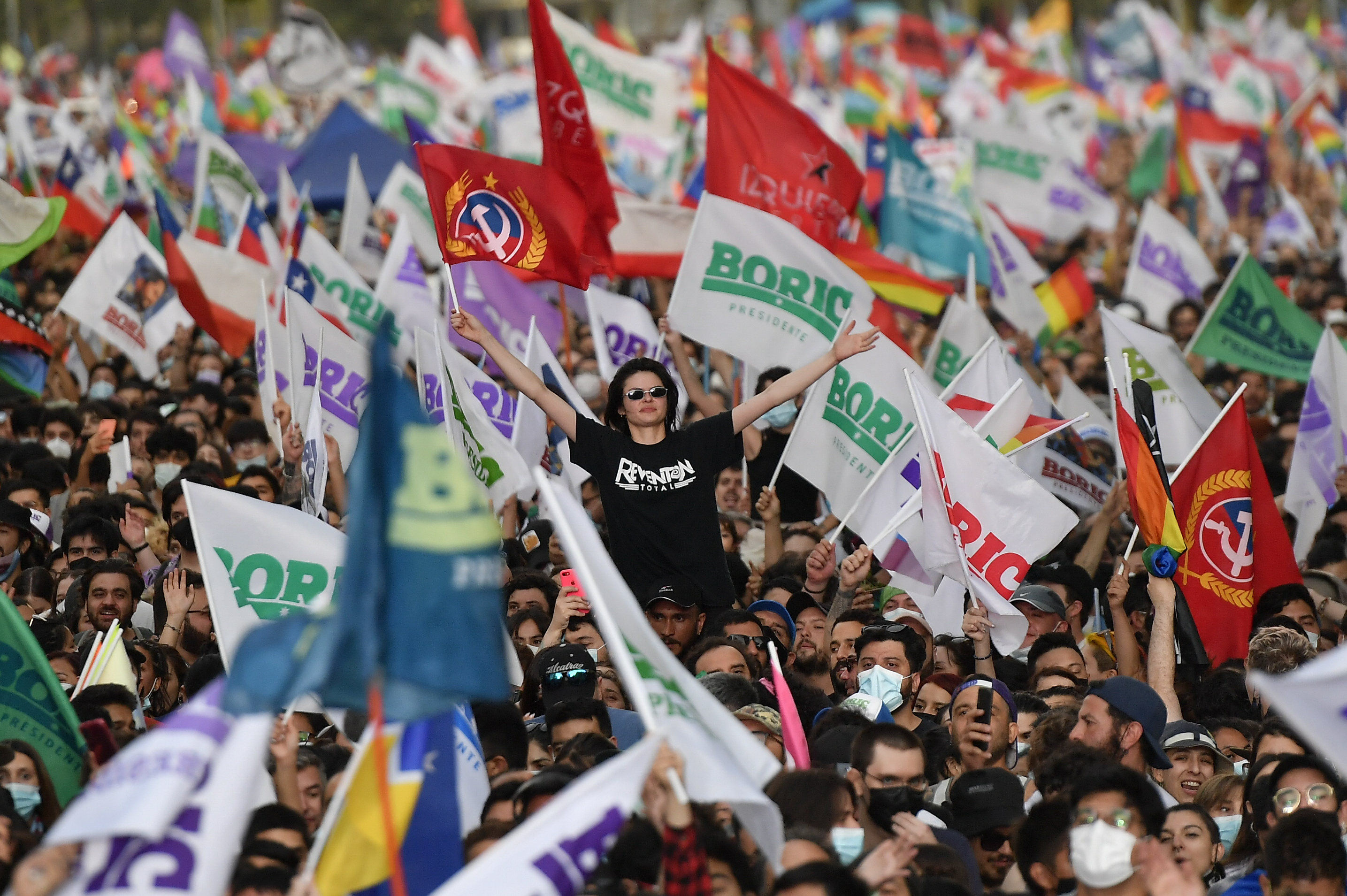 Mr Kast, 55, a devout Roman Catholic and father of nine, emerged from the far-right fringe after having won less than 8 per cent of the vote in 2017.

An admirer of Brazil's far-right President, Jair Bolsonaro, he rose steadily in the polls this time with a divisive discourse emphasising conservative family values and playing on Chileans' fears that a surge in migration — from Haiti and Venezuela — was driving crime.

As a lawmaker he has a record of attacking Chile's LGBTQI+ community and advocating more restrictive abortion laws.

Mr Kast's brother, Miguel, was one of the dictator's top advisers.

In recent days, both candidates had tried to veer toward the centre.

"I'm not an extremist. … I don't feel far right," Mr Kast proclaimed in the final stretch even as he was dogged by revelations that his German-born father had been a card-carrying member of Adolf Hitler's Nazi party.

Mr Boric's victory likely to be tempered by a divided congress.

In addition, the political rules could soon change because a newly elected convention is rewriting the country's Pinochet-era constitution.

The convention — the nation's most powerful elected institution — could in theory call for new presidential elections when it concludes its work next year and if the new charter is ratified in a plebiscite.