The biblical town of Bethlehem marked its second straight Christmas Eve under the shadow of the coronavirus — with small crowds and grey, gloomy weather dampening celebrations in the traditional birthplace of Jesus.

A ban on nearly all incoming air traffic by Israel — the main entry point for foreign visitors heading to the occupied West Bank — kept international tourists away for a second consecutive year.

The ban is meant to slow the spread of the highly contagious Omicron variant, which has shaken Christmas celebrations around the world. Instead, local authorities were counting on the Holy Land's small Christian community to lift spirits.

It was a theme seen around the world as revellers, weary from nearly two years of lockdowns and safety restrictions, searched for ways to return to rituals that were called off last year, while still celebrating safely.

"We can't let the virus take our lives from us when when we're healthy," said Rosalia Lopes, a retired Portuguese government worker who was doing some last-minute shopping in the coastal town of Cascais.

She said she and her family were fed up with the pandemic and determined to go ahead with their celebrations with the help of safety measures like vaccines and booster shots, rapid home tests and wearing masks in public. She planned a traditional Portuguese Christmas Eve dinner of baked cod. 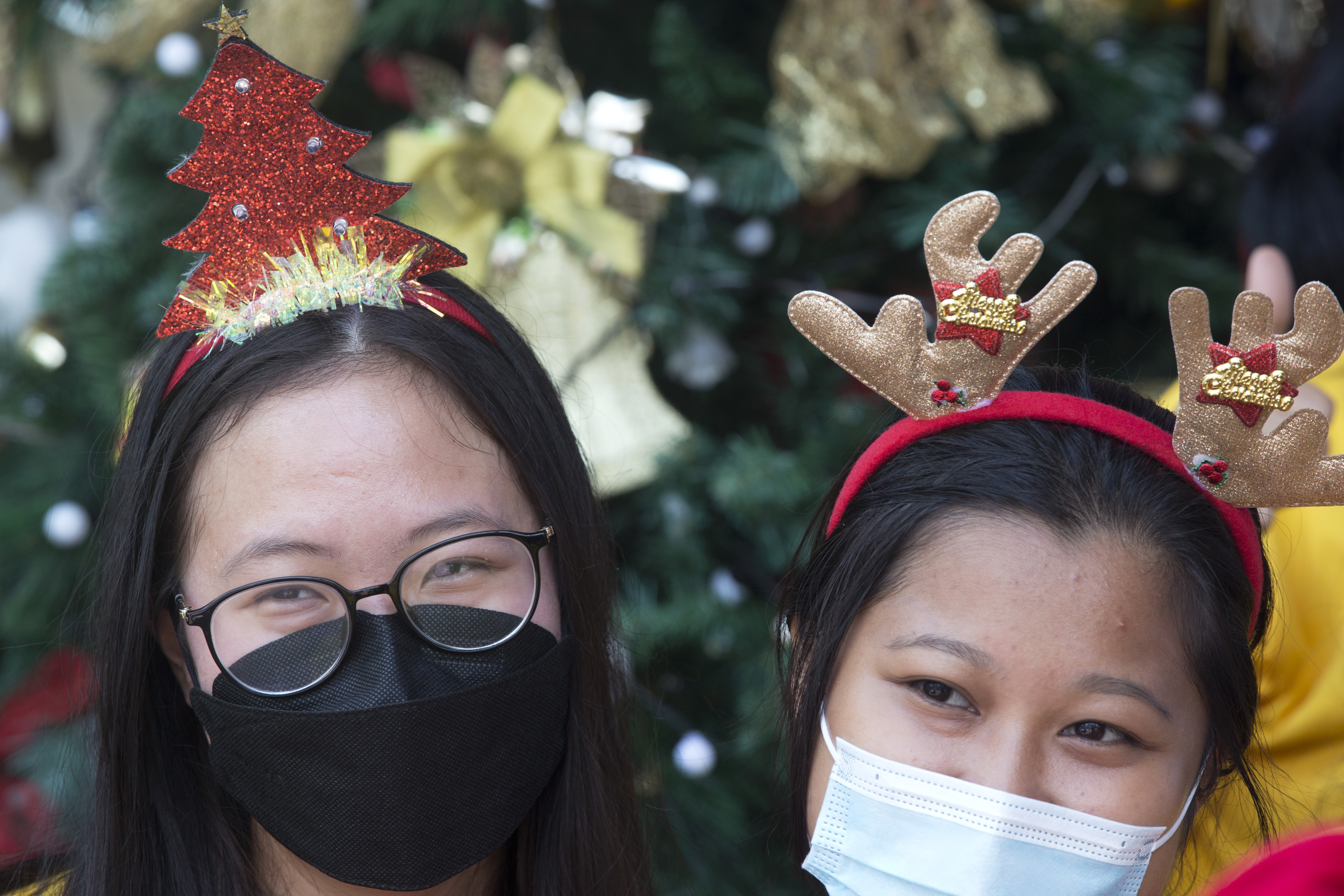 "We have to take precautions, of course, but we're really looking forward to it," she said.

In Germany, church services were scaled back and a Cologne cathedral held a special Christmas vaccination campaign.

Spain ordered people to wear masks, even outdoors while people in the Philippines and Indonesia, wore masks as they did their last-minute shopping.

And in France, hospital workers decorated a Christmas tree in a crowded intensive-care unit. 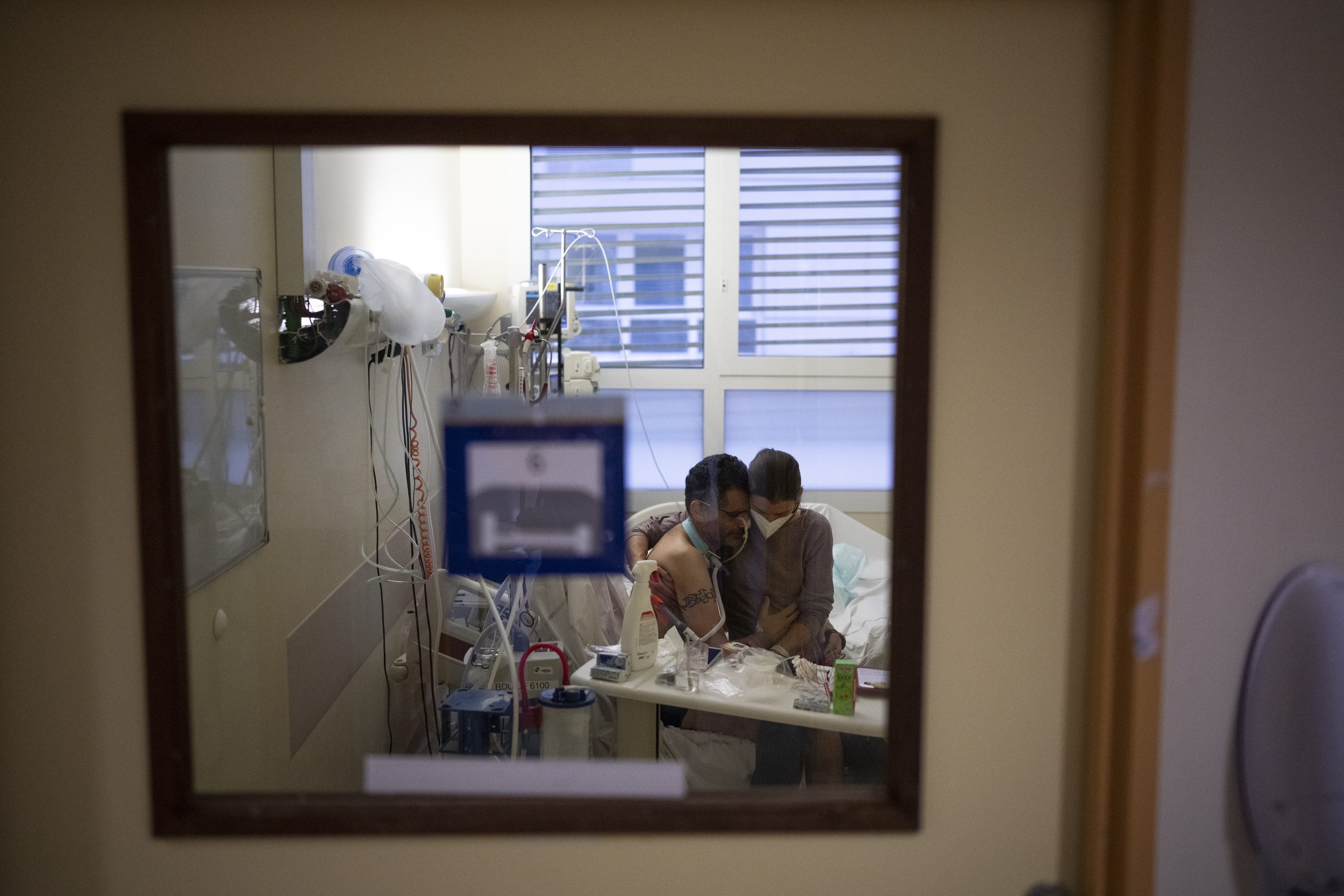 Bethlehem's mayor, Anton Salman, said the town was optimistic that 2021 would be better than last year's Christmas, when even local residents stayed home due to lockdown restrictions, and marching bands paraded through empty streets.

"Last year, our festival was virtual, but this year it will be face to face with popular participation," Salman said.

In the afternoon, hundreds of people gathered in the town's central Manger Square as a line of bagpipe-and-drum-playing bands streamed through the area ahead of the arrival from Jerusalem of Latin Patriarch Pierbattista Pizzaballa, the top Roman Catholic clergyman in the Holy Land.

"I hope that this COVID will finish," Pizzaballa said before departing Jerusalem and crossing through an Israeli checkpoint into Bethlehem. Pizzaballa waved to well-wishers as his motorcade made its way through town. He said spirits were much better than last year.

"Last year was very sad. This year we see a lot of people, very crowded, and a lot of joy. So even if we are not 100 per cent, we are 90 per cent there. Merry Christmas," he said, before entering the Church of the Nativity to prepare for Midnight Mass. The church is built on the grotto where Christians believe Jesus was born.

Before the pandemic, Bethlehem would host thousands of Christian pilgrims from around the world, bringing a strong dose of holiday spirit to the town and a huge jolt to the local economy.

In early November, Israel lifted a year and a half ban that had kept most foreign tourists out of the area. But weeks later, it was forced to re-impose the restrictions as the omicron variant began to spread worldwide, dashing the hopes of the local tourism sector. Tourism is the lifeblood of Bethlehem's economy, and the lack of visitors has hit hotels, restaurants and gift shops especially hard.

"Under normal conditions for this time of year, I usually have a 20-metre queue outside," said Adil Abu Nayaf, owner of an empty food stall in Manger Square.

Those who attended tried to make the best of a difficult situation.

The Holy Land is home to over 200,000 Christians, a small but tight-knit community that makes up an estimated one per cent to two per cent of the population in Israel and the occupied West Bank.

There are also thousands of foreign labourers and African migrants, as well as diplomats and journalists. Billy Stuart, an employee at the British Consulate in Jerusalem, said his experience in Bethlehem was uplifting, despite the smaller-than-hoped-for crowds.

"The parade is amazing and I did not realise there were so many Palestinian bag pipers," he said.

Celebrations in Europe, where infections are surging in many countries, were also more subdued — but forging ahead.

As Spain returned Friday to mandatory face-covering outdoors, 19-year-old student Andrés Pérez and a group of volunteers headed out to offer people without homes masks and a warm breakfast. 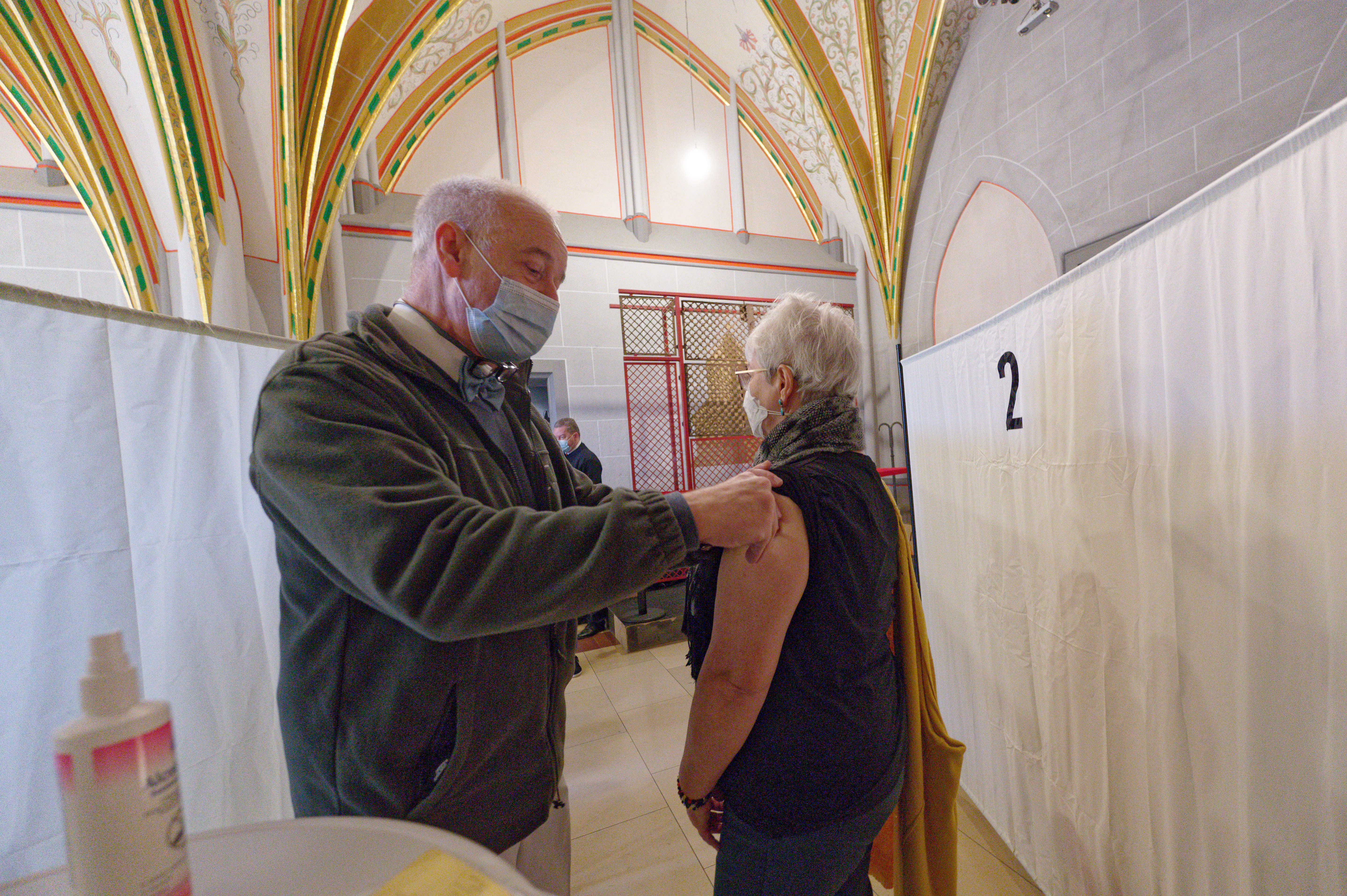 "It's hard to do it (wear the mask), but it's better for all of us," said Pérez, whose group brought a guitar to serenade homeless people with Christmas carols.

Spanish authorities ruled out more controversial measures, such as bar and restaurant closures or caps on gatherings. But some regions have taken a more drastic approach. The northeastern Catalonia region has reinstated curfews and limited to a maximum of 10 the number of people allowed to meet indoors.

In Germany, churchgoers faced a thicket of health restrictions and limits on attendance.

Frankfurt's cathedral, which can hold 1,200 people, offered only 137 distanced spaces, which were booked up days in advance. Singing was allowed only through masks. 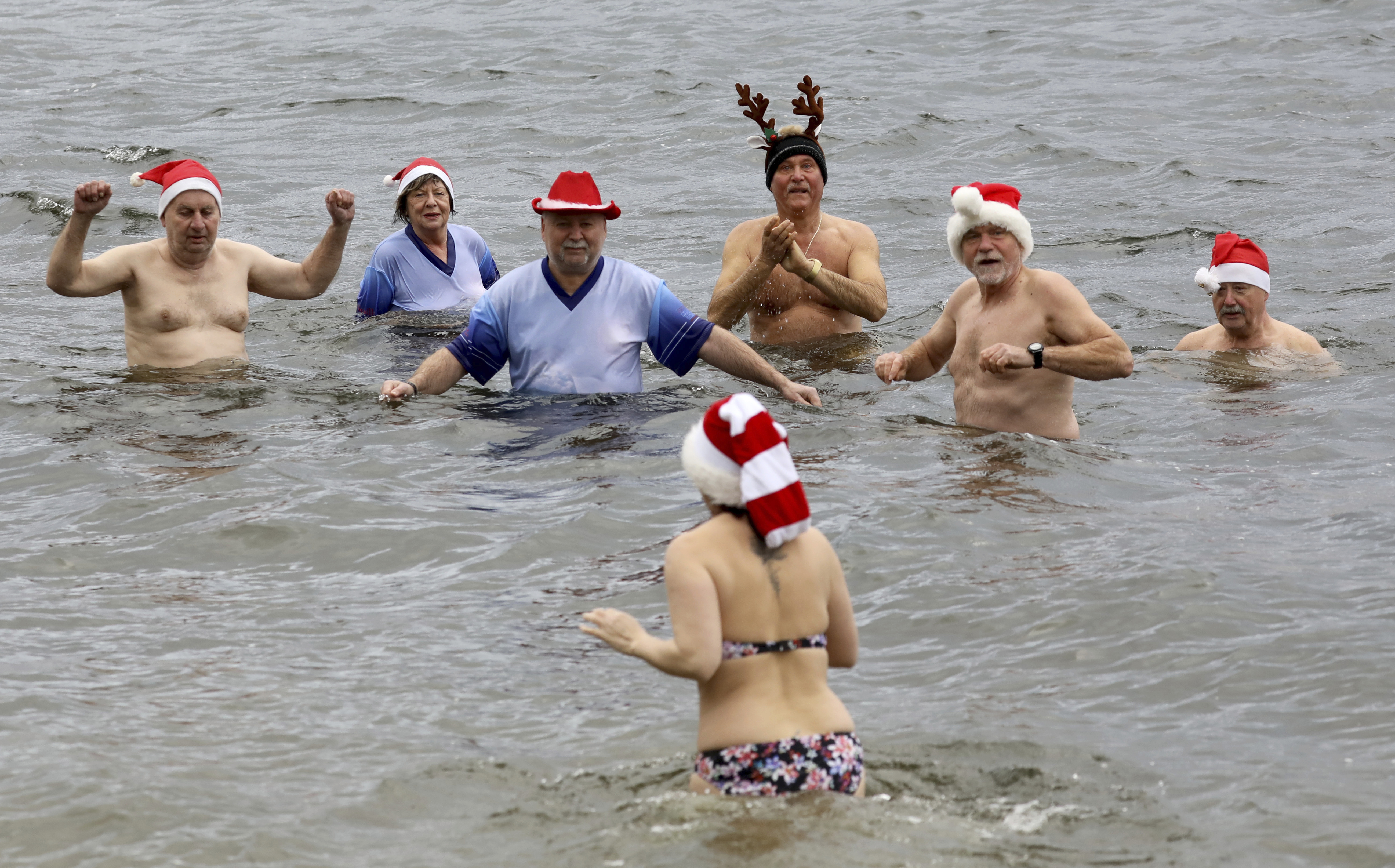 In some regions, churches required proof of vaccination or testing on top of strict capacity limits and masking.

A line wound halfway around Cologne's massive cathedral, not for midnight Mass but for vaccinations in an adjacent church hall, the DPA news agency reported.

The offer of shots was a sign of "care for one's neighbour" that was consistent with the message of Christmas, cathedral provost Guido Assmann said.

In the French Mediterranean city of Marseille, the intensive care unit at La Timone Hospital has been taking in more and more COVID-19 patients as the holidays approached. 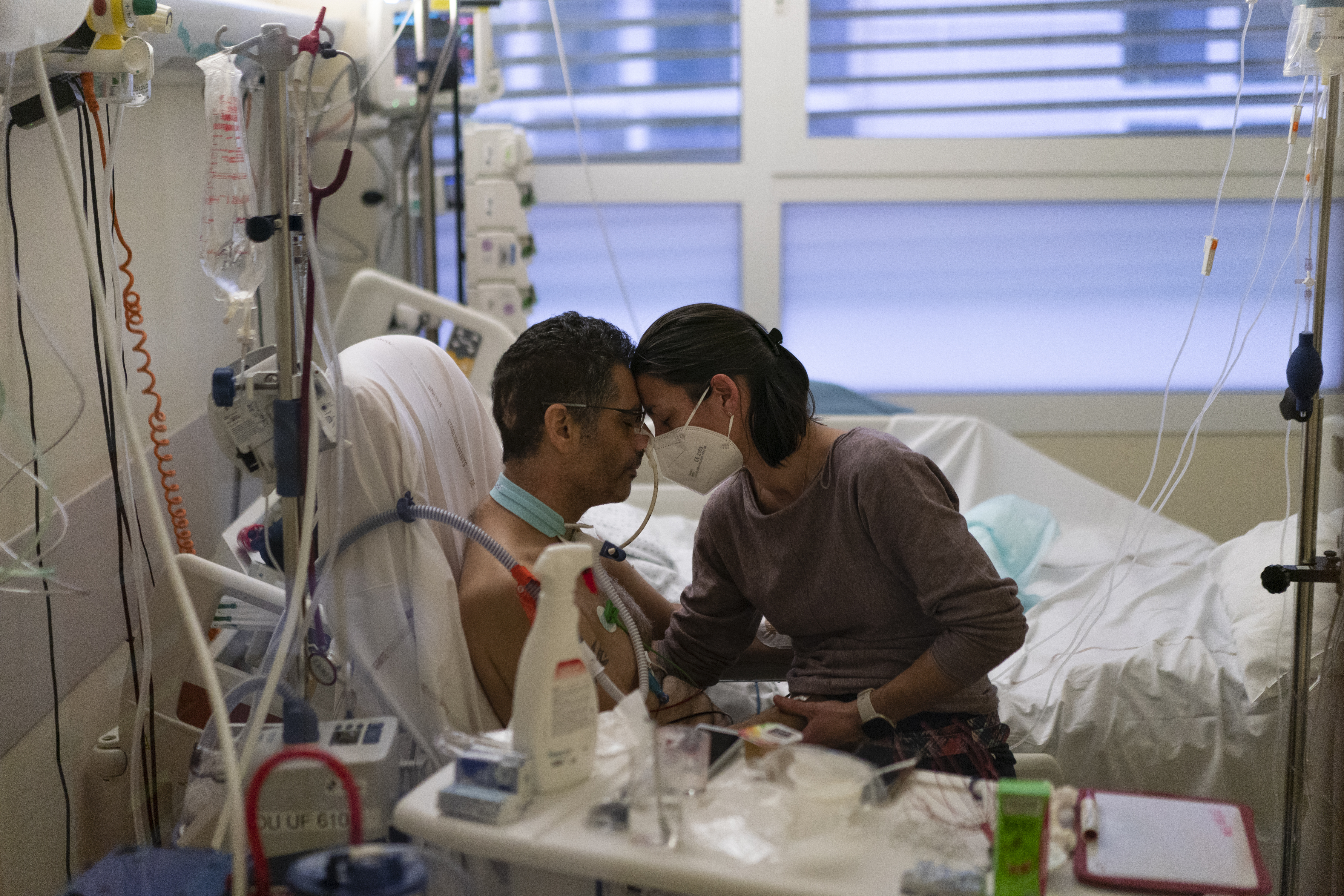 Amelie Khayat has been paying daily visits to her husband Ludo, 41, who is recovering from spending 24 days in a coma and on a breathing machine.

They touched their heads together as she sat on his bed, and now that he's strong enough to stand, he stood to give her a farewell hug.

In a nearby room, another patient lay unconscious, her son's winter hat placed on her belly. In another, a Christian icon lay propped on the virus patient's tray, left by his family. Down the hall, Katy Zalinian waited anxiously to visit her cousin; later, suited up, she entered his room and touched her hand lovingly to his leg.

Outside, a medical worker put final decorations on the ICU Christmas tree.