The world’s largest and most powerful space telescope rocketed away Saturday on a high-stakes quest to behold light from the first stars and galaxies and scour the universe for hints of life.

The $10 billion observatory hurtled toward its destination 1.6 million kilometres away or more than four times beyond the moon.

It will take a month to get there and another five months before its infrared eyes are ready to start scanning the cosmos.

First, the telescope’s enormous mirror and sun-shield need to unfurl; they were folded origami-style to fit into the rocket's nose cone.

Otherwise, the observatory won’t be able to peer back in time 13.7 billion years as anticipated, within a mere 100 million years of the universe-forming Big Bang.

NASA Administrator Bill Nelson called Webb a time machine that will provide "a better understanding of our universe and our place in it: who we are, what we are, the search that's eternal.”

But he cautioned: “There are still innumerable things that have to work and they have to work perfectly … we know that in great reward there is great risk."

Intended as a successor to the aging Hubble Space Telescope, the long-delayed James Webb is named after NASA’s administrator during the 1960s. 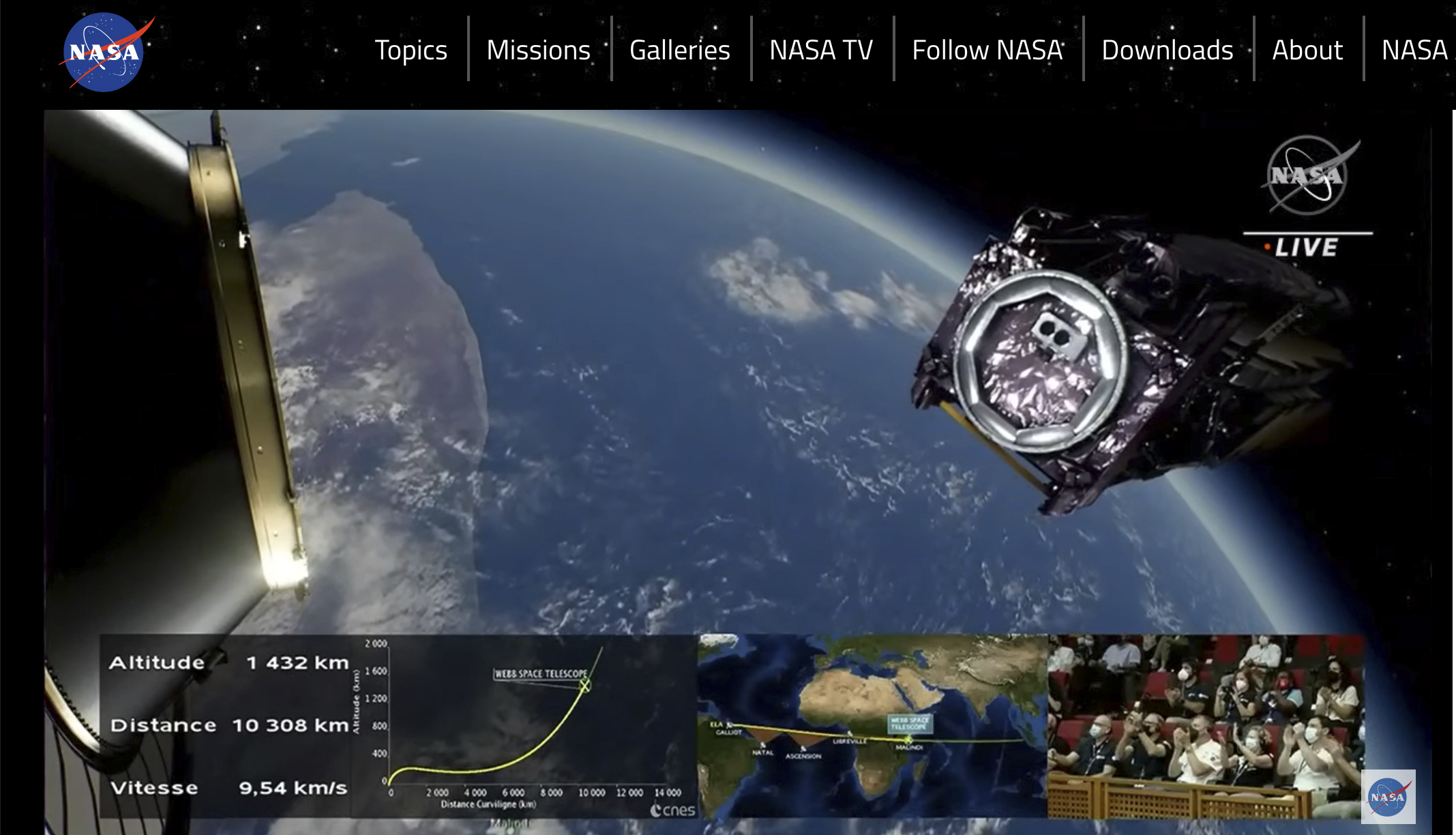 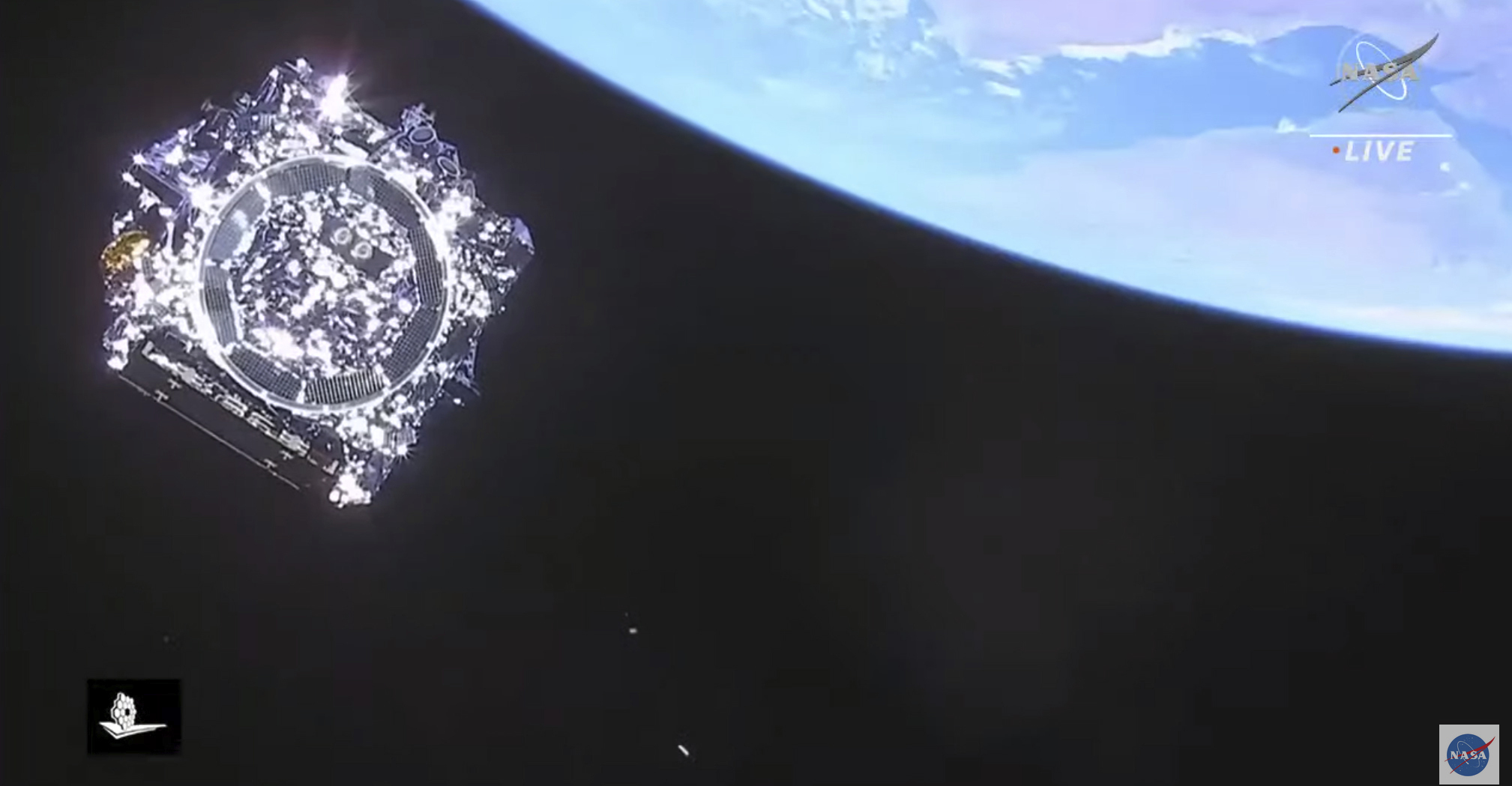 NASA partnered with the European and Canadian space agencies to build and launch the new seven-tonne telescope, with thousands of people from 29 countries working on it since the 1990s.

With the launch falling on Christmas and a global surge in COVID-19 cases, there were fewer spectators at the French Guiana launch site than expected.

Nelson bowed out along with a congressional delegation and many contractors who worked on the telescope.

Around the world, astronomers and countless others tuned in, anxious to see Webb finally taking flight after years of setbacks.

Last-minute technical snags bumped the launch nearly a week, then gusty wind pushed it to Christmas.

A few of the launch controllers wore Santa caps in celebration.

He described it as a special moment but added: “It's very nerve-racking. I couldn't do launches every single day. This would not be good for my life expectancy.”

Cheers and applause erupted in and outside Launch Control following Webb’s flawless launch, with jubilant scientists embracing one another amid shouts of “Go Webb!” and signs that read: “Bon Voyage Webb.”

READ MORE: This $13 billion space telescope will reveal the secrets of the universe 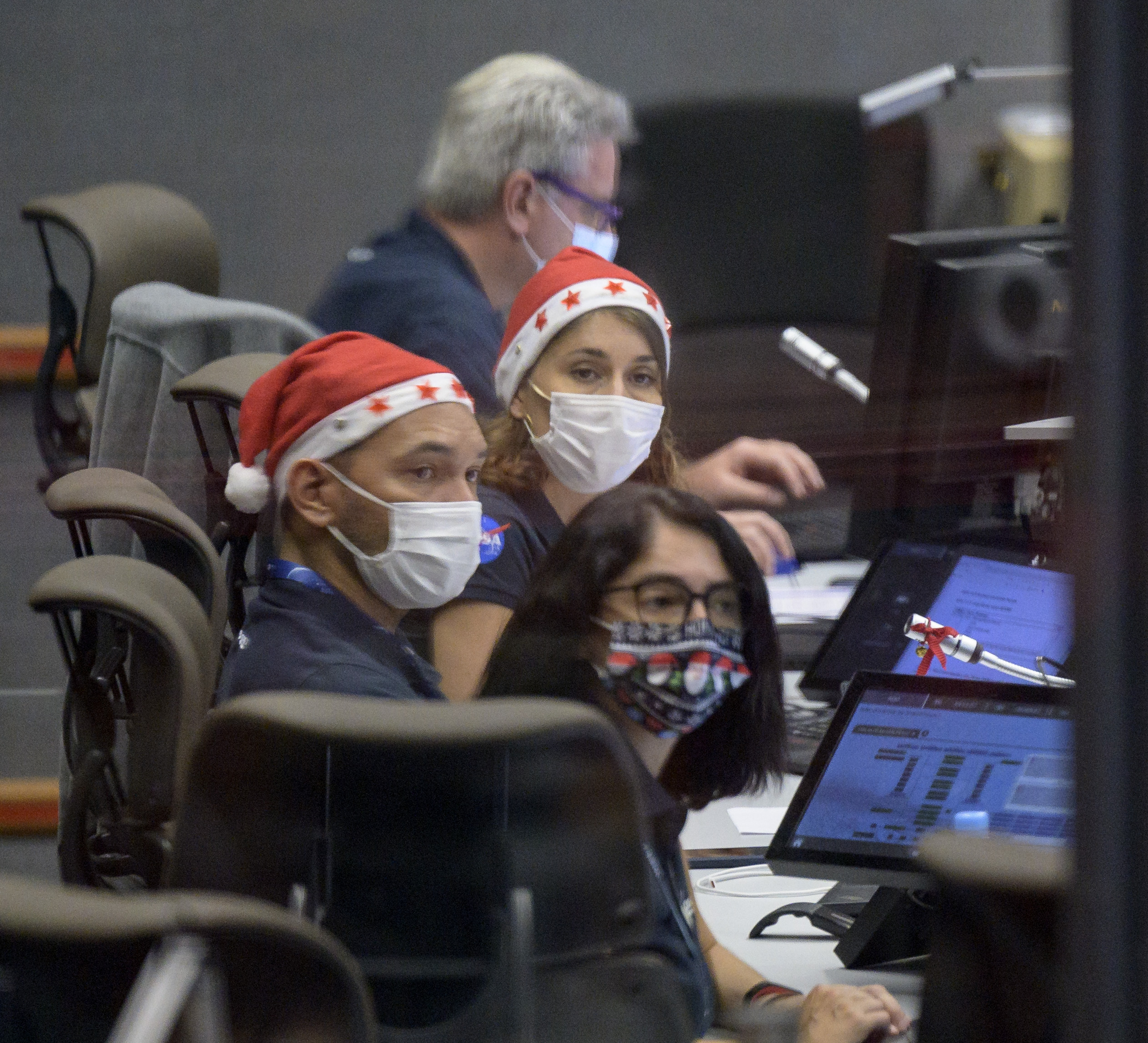 Cameras on the rocket’s upper stage provided one last glimpse of the shimmering telescope against a backdrop of Earth before it sped away.

“That picture will be burned into my mind forever,” Zurbuchen told journalists.

The telescope's showpiece: a gold-plated mirror more than 6.5 metres across.

Protecting the observatory is a wispy, five-layered sun-shield, vital for keeping the light-gathering mirror and heat-sensing infrared detectors at subzero temperatures.

If all goes well, the sun-shield will be opened three days after liftoff, taking at least five days to unfold and lock into place.

Next, the mirror segments should open up like the leaves of a drop-leaf table, 12 days or so into the flight.

In all, hundreds of release mechanisms need to work – perfectly – in order for the telescope to succeed.

Such a complex series of actions is unprecedented — “like nothing we’ve done before,” NASA program director Greg Robinson noted.

"Now it’s our job to start from here and keep going," Massimo Stiavelli said, an astronomer who heads the Webb mission office at the Space Telescope Science Institute in Baltimore.

The institute serves as the control hub for Hubble and, now, Webb. 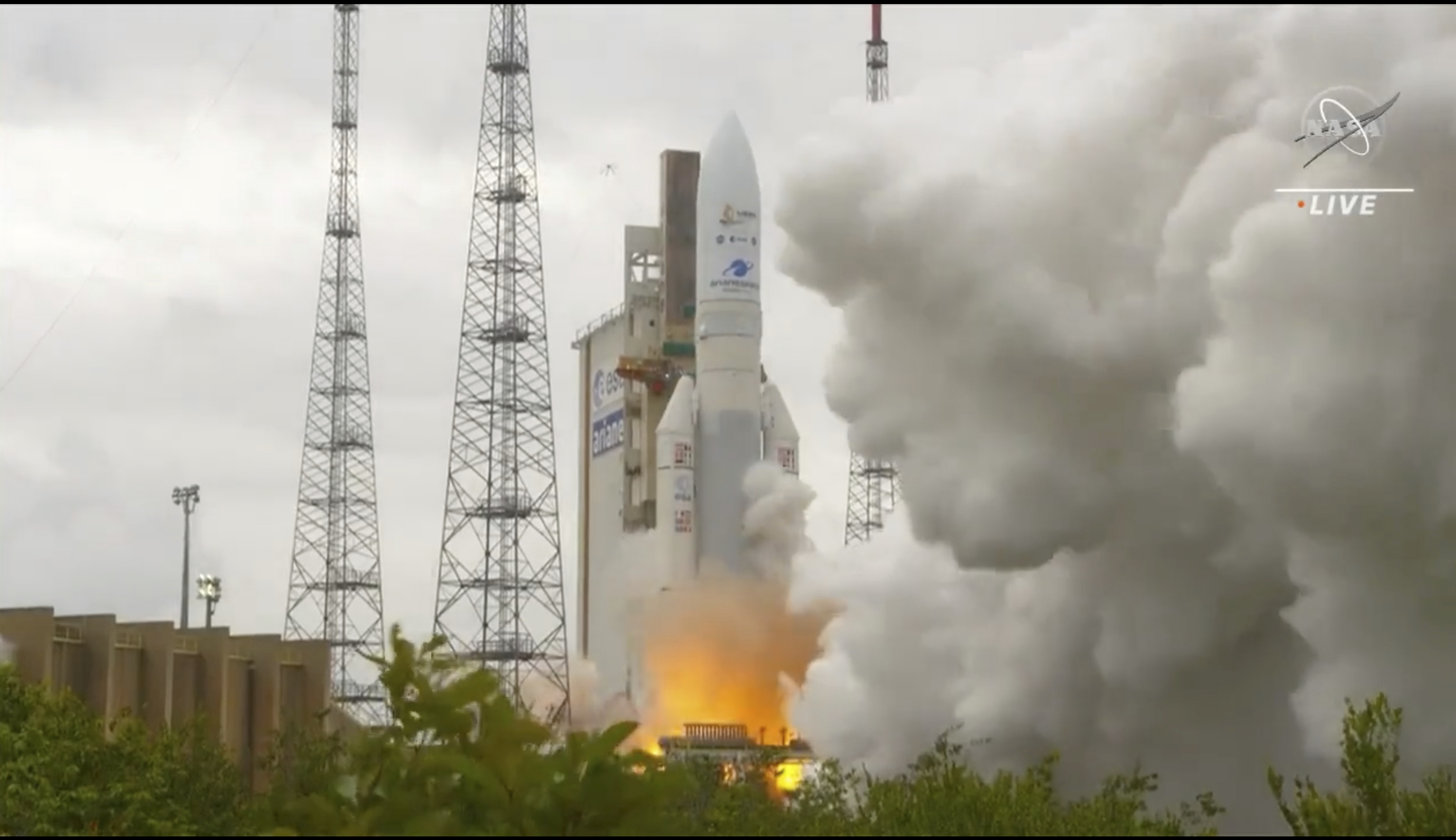 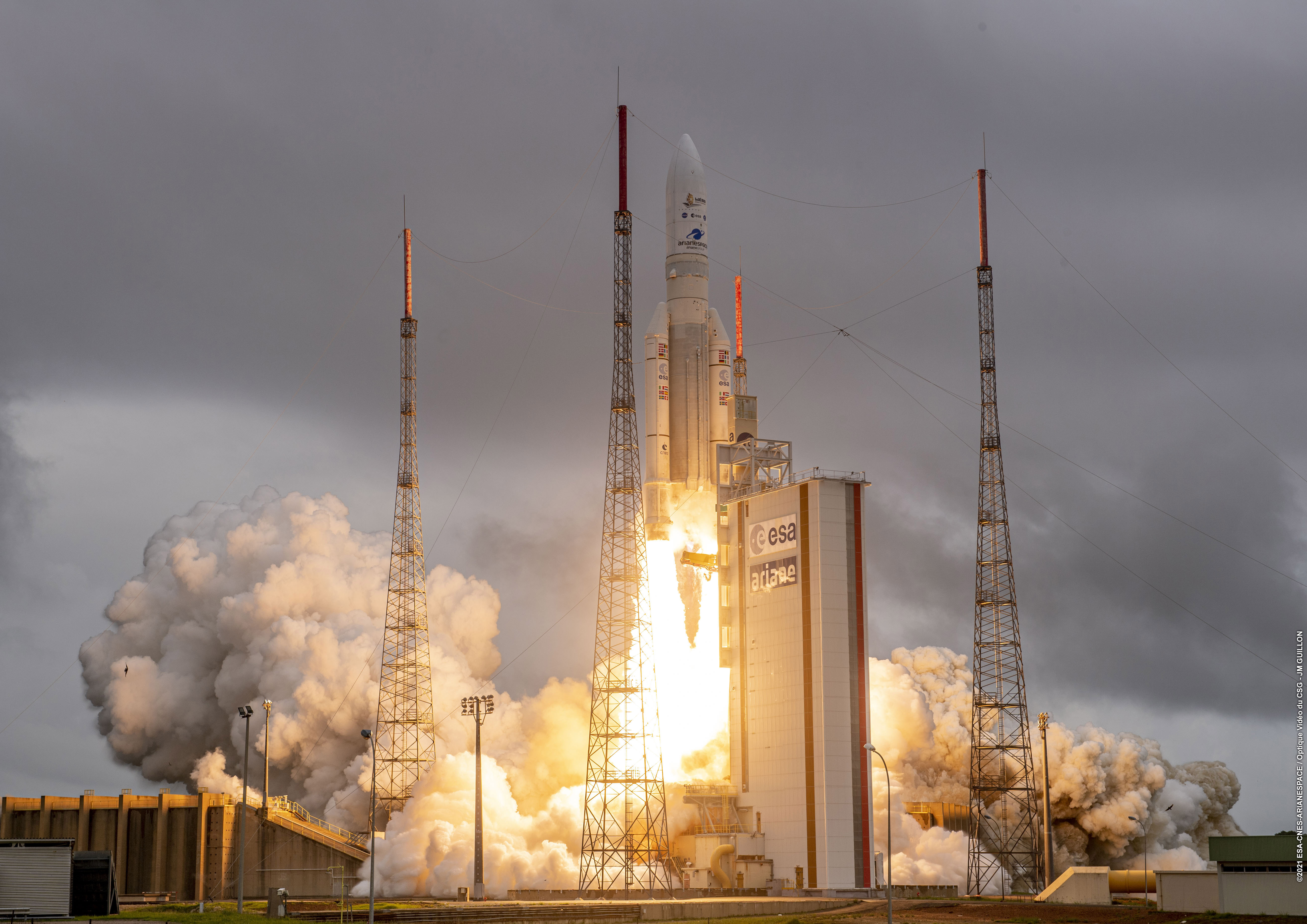 The Hubble Space Telescope will be a tough act to follow, according to Stiavelli and retired astronaut-astronomer Steven Hawley, even though Webb is 100 times more powerful.

Hawley, in fact, is more stressed over Webb than he was for Hubble, which he released into orbit from space shuttle Discovery in 1990.

That’s because Webb will be too far away for rescuing, as was necessary when Hubble turned out to have blurry vision from a defective mirror.

Spacewalking repairs by astronauts transformed Hubble into a beloved marvel that has revolutionized humanity’s understanding of the universe, casting its eyes as far back as 13.4 billion years.

It’s now up to Webb to draw even closer to the Big Bang 13.8 billion years ago, its infrared vision keener and more far-reaching than Hubble’s is in the shorter visible and ultraviolet wavelengths.

NASA is shooting for 10 years of operational life from Webb.

Engineers deliberately left the fuel tank accessible for a top-off by visiting spacecraft, if and when such technology becomes available.

“Hubble is like the perfect story. It starts badly, then the cavalry fixes it, then it’s a major success. It’s almost a Christmas movie in a way,” Stiavelli said following Webb's liftoff.

“It’s a high bar, but hopefully the science contributions of Webb will be up there.”