The Reverend Athanasius Chidi Abanulo — using skills honed in his African homeland to minister effectively in rural Alabama — determines just how long he can stretch out his Sunday homilies based on who is sitting in the pews.

Seven minutes is the sweet spot for the mostly white and retired parishioners who attend the English-language Mass at Immaculate Conception Catholic Church in the small US town of Wedowee.

"If you go beyond that, you lose the attention of the people," he said. For the Spanish-language Mass an hour later, the Nigerian-born priest — one of numerous African clergy serving in the US — knows he can quadruple his teaching time.

"The more you preach, the better for them," he said.

As he moves from one American post to the next, Rev. Abanulo has learned how to tailor his ministry to the culture of the communities he is serving while infusing some of the spirit of his homeland into the universal rhythms of the Mass.

"Nigerian people are relaxed when they come to church," Rev. Abanulo said.

"They love to sing, they love to dance. The liturgy can last for two hours. They don't worry about that."

During his 18 years in the US, Rev. Abanulo has filled various chaplain and pastor roles across the country, epitomising an ongoing trend in the American Catholic church. As fewer American-born men and women enter seminaries and convents, US dioceses and Catholic institutions have turned to international recruitment to fill their vacancies.

The Diocese of Birmingham, where Rev. Abanulo leads two parishes, has widened its search for clergy to places with burgeoning religious vocations like Nigeria and Cameroon, said Birmingham Bishop Steven Raica. Priests from Africa were also vital in the Michigan diocese where Bishop Raica previously served. 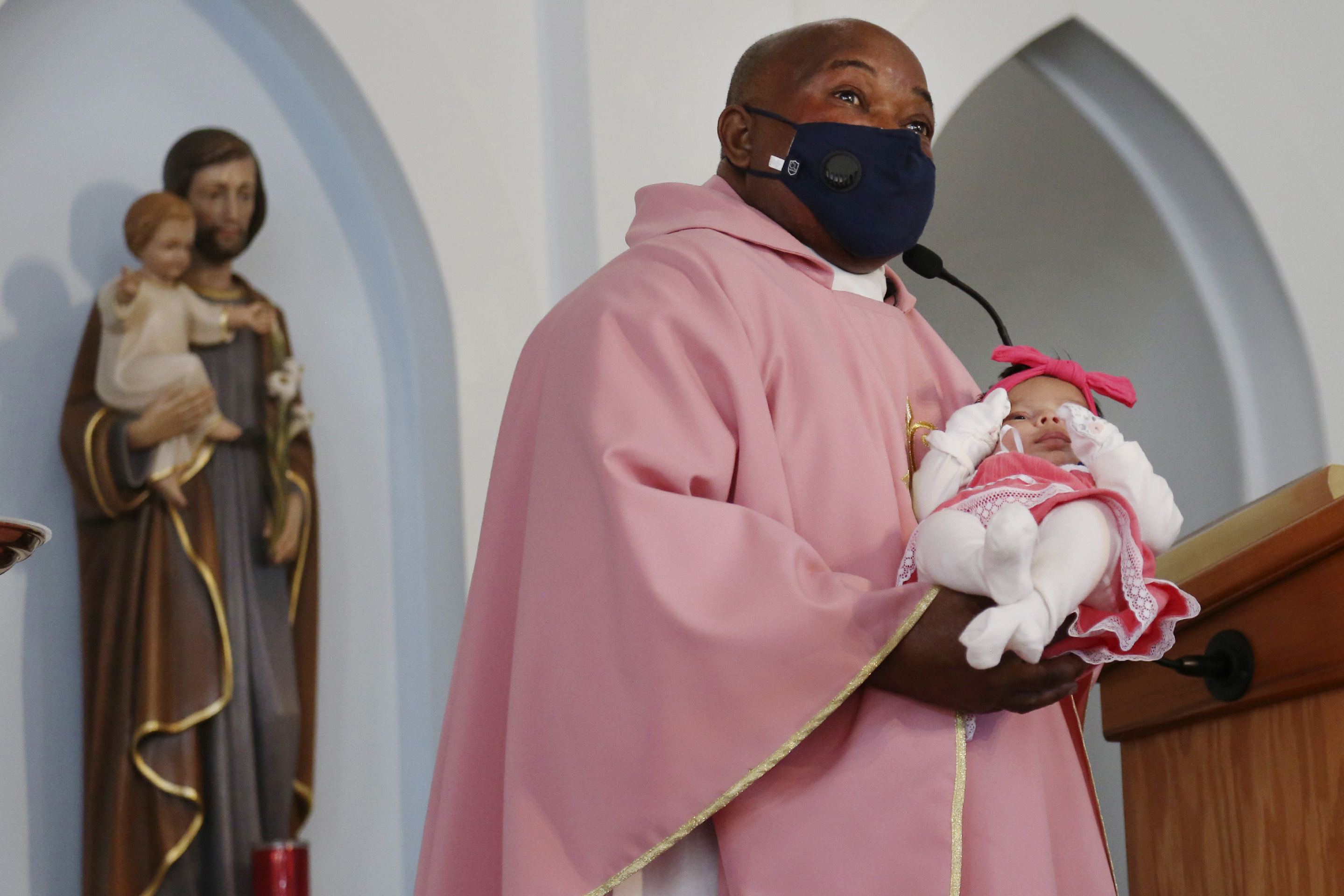 "They have been an enormous help to us to be able to provide the breadth and scope of ministry that we have available to us," he said.

Africa is the Catholic church's fastest-growing region. There, the seminaries are "fairly full," said Reverand Thomas Gaunt, director of Georgetown University's Centre for Applied Research in the Apostolate, which conducts research about the Catholic church.

It's different in the US, where the Catholic church faces significant hurdles in recruiting home-grown clergy following decades of declining church attendance and the damaging effects of widespread clergy sex abuse scandals.

Catholic women and married men remain barred from the priesthood; arguments that lifting those bans would ease the priest shortage have not gained traction with the faith's top leadership. 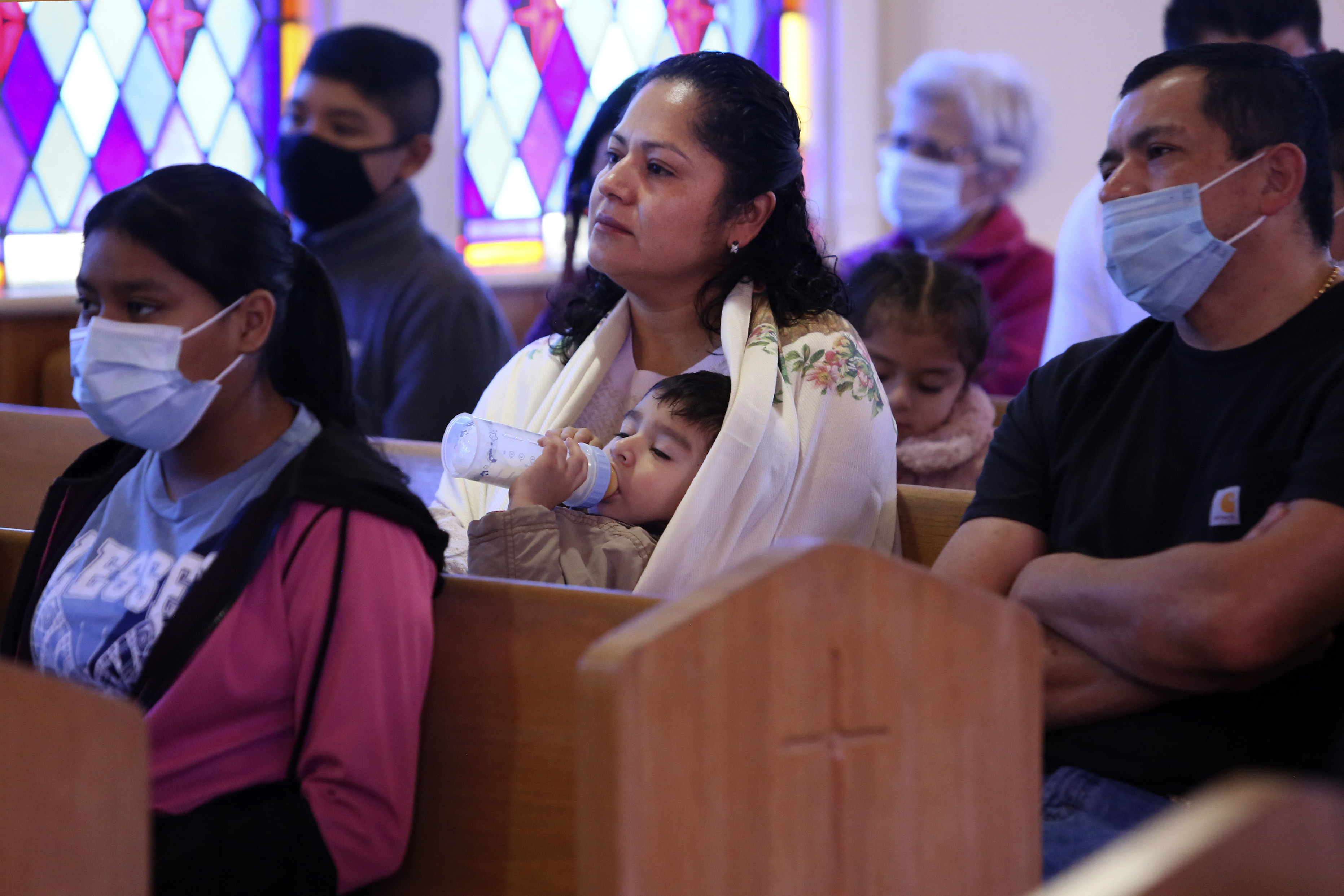 "What we have is a much smaller number beginning in the 1970s entering seminaries or to convents across the country," Rev. Gaunt said.

"Those who entered back in the '50s and '60s are now elderly and so the numbers are determined much more by mortality."

From 1970 to 2020, the number of priests in the US dropped by 60 per cent, according to data from the Georgetown centre. This has left more than 3500 parishes without a resident pastor.

Rev. Abanulo oversees two parishes in rural Alabama. His typical Sunday starts with an English-language Mass at Holy Family Catholic Church in Lanett, about 200km from Birmingham along the Alabama-Georgia state line. After that, he is driven an hour north to Wedowee, where he celebrates one Mass in English, another in Spanish. "He just breaks out in song and a lot of his lectures, he ties in his boyhood, and I just love hearing those stories," said Amber Moosman, a first-grade teacher who has been a parishioner at Holy Family since 1988.

"There was no all of a sudden, the priest sings, nothing like that … It was very quiet, very ceremonial, very strict," she said.

"It's a lot different now."

Rev. Abanulo was ordained in Nigeria in 1990 and came to the US in 2003 after a stint in Chad. His first US role was as an associate pastor in the diocese of Oakland, California, where his ministry focused on the fast-growing Nigerian Catholic community. 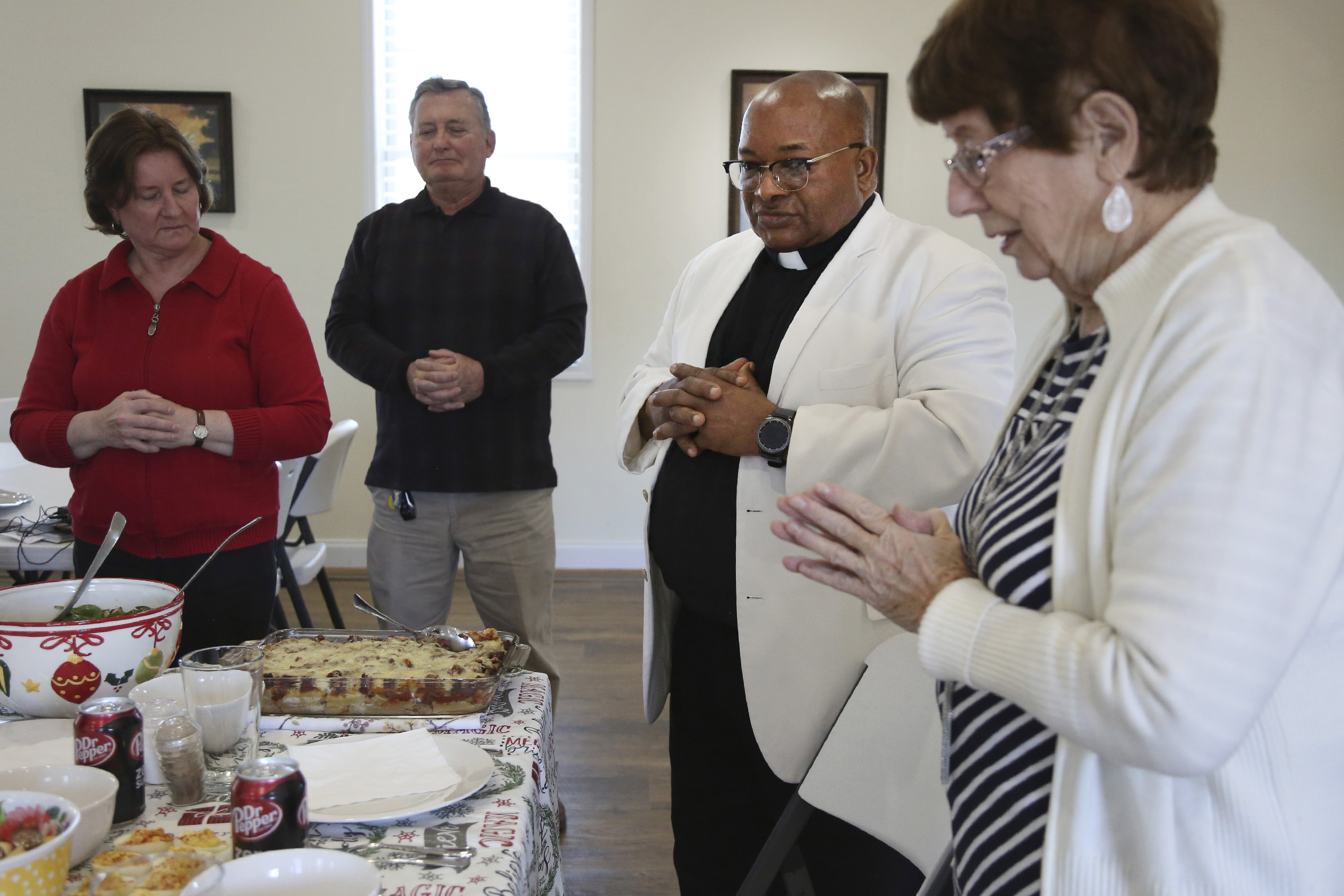 Since then, he has been a hospital chaplain and pastor in Nashville, Tennessee, and a chaplain at the University of Alabama.

Amid the US clergy shortage, religious sisters have experienced the sharpest declines, dropping 75 per cent since 1970, according to the Georgetown centre.

When Maria Sheri Rukwishuro was told she was being sent from the Sisters of the Infant Jesus order in Zimbabwe to West Virginia to work as a missionary nun, she asked her mother superior, "Where is West Virginia?".

She was scared, worrying about the unknowns.

"What kind of people am I going to? I'm just a Black nun coming to a white country," Sister Rukwishuro told The Associated Press from Clarksburg, West Virginia, where she has been teaching religious education to public and Catholic school students since arriving in 2004.

Sister Rukwishuro vividly remembers that at her introduction, a little girl walked to her and "rubbed her finger on my fingers all the way, then she looked at her finger and she smiled but my heart sank…She thought I was dirty."

Despite that, Sister Rukwishuro says most people have been very welcoming. She's now a US citizen and says, "It feels like home."

One of her first culture shocks was an overnight snowfall.

"I really screamed. I thought it was the end of the world," she said.

"Now I love it. I do my meditations to that."

During their integration into American life, it is commonplace for newly arrived clergy to face culture shocks.

For Sister Christiana Onyewuche of Nigeria, a hospital chaplain in Boston administering last rites for the dying, it was cremation. She recalled thinking, "Like really? … How can they burn somebody? I can't even imagine."

She came to the US 18 years ago and previously served as the president of the African Conference of Catholic Clergy and Religious, a support group for African missionaries serving in the US. 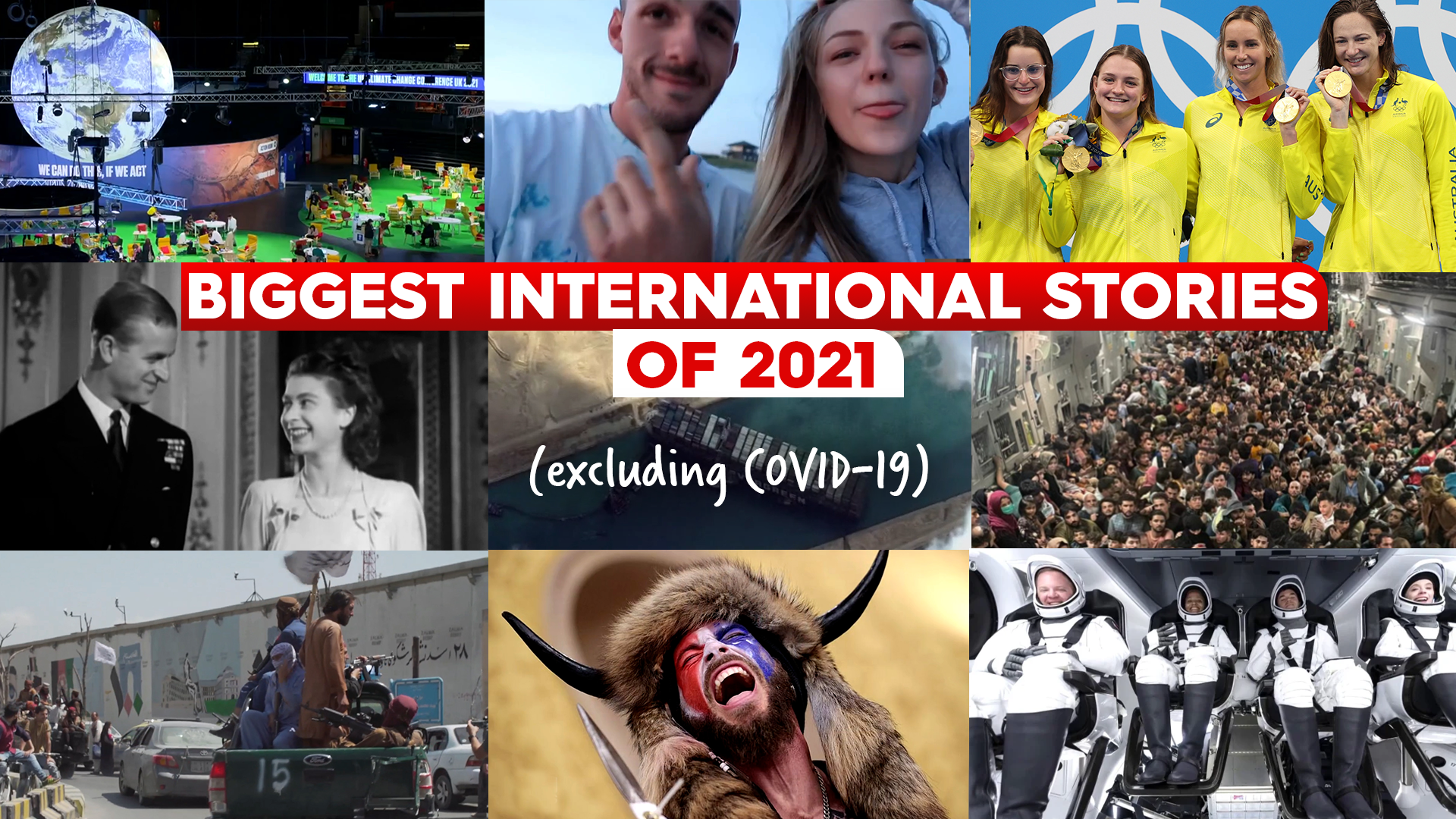 Sister Onyewuche said African clergy can face communication challenges with the Americans they serve. To address this, many dioceses have offered training to soften accents, she said. Rev. Abanulo, who went through the training in Oakland, says it helped him slow down his speech and improve his pronunciations.

Rev. Abanulo, who moved to Alabama in 2020, admits he was initially apprehensive about his latest posting, which meant exchanging a comfortable role as university chaplain for two rural parishes.

"People were telling me 'Father, don't go there. The people there are rednecks'," he said.

But after a year and a warm reception, he says he now tells his friends, "There are no rednecks here. All I see are Jesus necks."